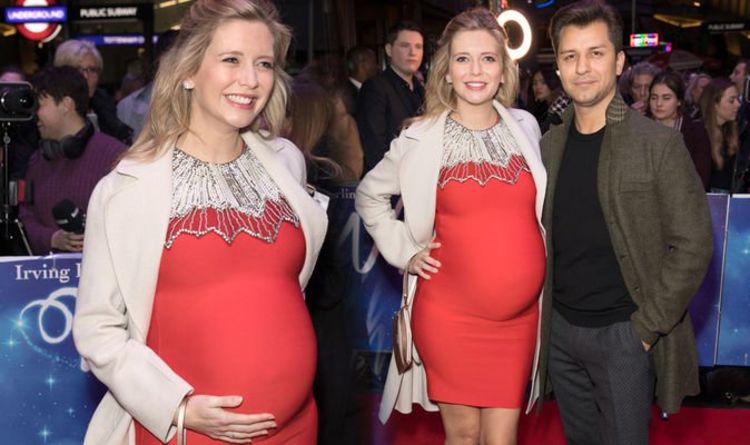 The Countdown star, who is expecting the couple’s first child, displayed her burgeoning baby bump as they posed together on the red carpet.

The television personality opted for a figure-hugging red dress for their festive outing.

Rachel, who has co-presented the Channel 4 quiz show for ten years, is currently on maternity leave ahead of the impending birth of her first child.

Last night, she enjoyed a date night with her husband of five months before the couple become parents for the first time.

Rachel opted for a form-fitting dress for her night out, which clung to her curves and perfectly showcased her growing baby bump.

It featured a silver and white sequin detail along the neckline which added a little sparkle to her ensemble – perfect for the festive season.

The mum-to-be teamed her beautiful dress with a pair of nude pumps, a small rose gold purse and a cream coat to keep her warm.

Rachel wore her blonde tresses swept away from her face and was sporting a healthy pregnancy glow as she posed for pictures on the red carpet.

She was snapped cradling her bump at the event marking the launch of the musical.

Professional dancer Pasha, who starred in Strictly Come Dancing for eight seasons, opted for a pair of patterned trousers with a round neck black jumper and dark green jacket for the outing.

The West End production of White Christmas is based on the iconic film of the same name and stars Dan Burton, 34, and former Strictly contestant Danny Mac, 31.

The former Hollyoaks star appeared in the 2016 series of the BBC ballroom dancing show.