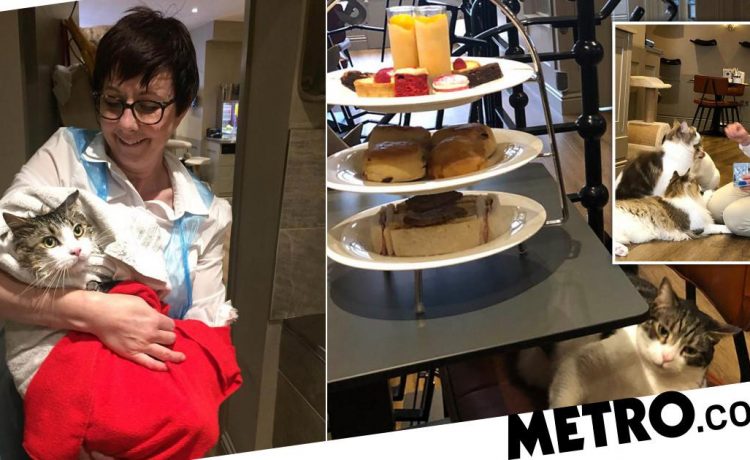 After spending two decades working her way up the ladder as a psychiatric nurse, Kay Allen, 58, decided to pack it all in and do something radically different: open her own cat cafe.

The former nurse from Holloway, North London, was inspired to make a change when she visited a cat cafe for the first time and was blown away by how relaxed she felt.

In 2018, she took the plunge and opened up Whiskers and Cream, a space where people can watch and play with nine gorgeous cats.

Kay said: ‘I had often joked about the idea of running my own cafe and baking cakes but, having done something as full on as I had before with the level of pressure and stress, it felt almost not enough of a challenge, in the right way, for me.

‘Then I came across the idea of running a cat cafe and I traded in my old job, that was 24/7 and where I was never really off duty, with 24/7 responsibility for a cat cafe.’

Kay qualified as a psychiatric nurse in 1998 and spent two decades as a clinician, working her way through the health service to end up managing a large inpatient psychiatric unit in the capital.

She found the job very rewarding but also emotionally ‘traumatic’.

In 2017, her friend took Kay to a cat cafe for her birthday – and it sparked her imagination.

‘The two things I really love are cats and food, particularly baking,’ Kay said. ‘For me, the fantasy was wow, I can bake in a nice environment, with cats.

‘How could you want anything else?’

So in March 2018, Kay left the NHS and opened a cafe just one mile away from her home – despite some shocked reactions from friends and family.

She said: ‘The people I worked with, some of them said “God you’re brave”, other people thought I was absolutely mad!

‘Some said they thought it wouldn’t work and it would die a death, they didn’t believe that it would succeed, and other people thought it was hilarious, they just couldn’t imagine it.

‘They thought it was strange.

‘I think they were worried about me leaving the NHS which is a regular income, I had a good job, and I was respected. When you see that, you might think why would you leave that?

‘It is a risky time to do it, but on the other hand my view was if I don’t do it now, I’ll be too old to have the energy to do it.’

The cafe is now home to nine cats: Devon Rex Trixie, the cafe’s first cat, tortoiseshell Molly, Amelia the brown tabby, Jack and Jasper the Maine Coons, Winnie the fluffy black cat, Arti the short-haired cat, Oscar the Tonkinese and Vanilla, a grey tabby and the oldest of the bunch.

Winnie and Arti were rescued after their previous owner couldn’t look after them; Vanilla was given to the cafe by a family who were emigrating to Australia, and Oscar, the cafe’s youngest cat, was a present for Kiran’s 50th birthday.

The journey hasn’t been easy.

The cafe had to go through major renovations, then in May 2019 someone broke in.

‘They took great big sledgehammers and smashed the safe out of the wall,’ said Kay of the unsolved crime. ‘Fortunately all the cats had just hidden and not ventured out onto the main road.

“With all those challenges it’s taken us a while to get going and to build up a customer base, we’ve got quite a few regulars.’

Then, of course, Covid hit.

But despite all this, Kay feels positive about the future, and has no regrets about her drastic career change.

‘You get so involved in the cats’ characters,’ she said. ‘I suppose I’ve become quite obsessed with the cats, they’re crazy.

‘It’s a calming and therapeutic space and even in lockdown I can be sat there in the cafe and people walking past can go from having a straight face to an almost overacted “oh my god” and a huge grin and smile.

‘That for me, from my background treating people’s mental health, gives me so much pleasure.’


MORE : Fire Brigade had to cut off cat’s tail to rescue it from the sofa


MORE : Tiny badger cub is hand-reared by rescue staff after she was separated from her set