Protests against suspension of parliament held across UK 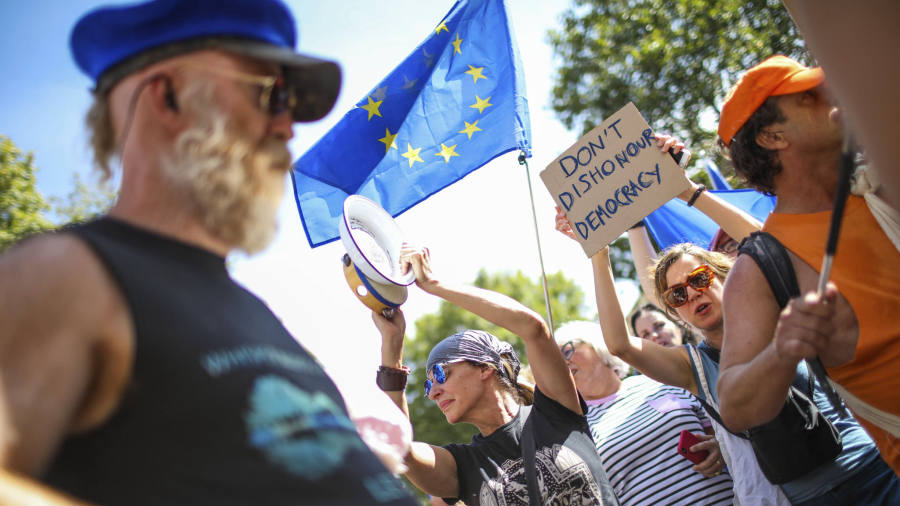 Thousands of protesters turned out at scores of demonstrations across the UK on Saturday aimed at forcing Boris Johnson, the prime minister, to reverse his decision to suspend parliament for five weeks in the run-up to the October 31 departure from the EU.

However, while Another Europe is Possible, the main organiser of the protests, expressed satisfaction at the scale of the turnout in Westminster, outside Mr Johnson’s official residence, participation appeared to fall well short of their predictions that hundreds of thousands would attend.

Demonstrators outside the gates of Downing Street shouted, “Boris Johnson, shame on you.” Addressing a rally just over a mile away at Russell Square, Keir Starmer, the opposition Labour party’s Brexit spokesman, told a group of a few hundred demonstrators that it was necessary to defeat the “slide into Trumpian politics”.

“Johnson wants to shut down parliament to silence us,” he told the crowd. “He is scared of scrutiny, of accountability.”

The protests had been hastily organised — under the hashtag #StopTheCoup — in the wake of Mr Johnson’s announcement on Wednesday that he had asked the Queen to allow him to prorogue — or suspend — sittings of parliament from the week starting September 9 until October 14. The move has been widely interpreted as an effort to prevent MPs from legislating to prevent the UK from leaving the EU on October 31 without an exit agreement.

Outside Downing Street, Keith Royds, from Great Dunmow in Essex, said he had come because of outrage at what appeared to be an attempt to achieve no-deal Brexit through “scurrilous means”.

“I think it’s important to demonstrate your concerns about the issues and, given the fact that the referendum was so closely fought and the outcome wasn’t absolutely overwhelming, there’s no mandate for the no-deal Brexit.”

In Manchester, Louise, a barrister who declined to give her surname, said the week’s events had been “very, very concerning”. She was among a crowd who listened in the shadow of the city’s cathedral to speeches by Paul Mason, a writer and Jeremy Corbyn supporter, MPs and MEPs.

“I am worried about what is going to happen to our system of government beyond Brexit,” Louise said. “This prime minister does not want to listen to the people.”

In Russell Square, Jill Eckersley, a writer, said the decision to suspend parliament was “inherently undemocratic” and flew in the face of British values.

“Having said that, I wish Brexit would just sort itself out,” she said. “I’m exhausted.”

On Twitter, Another Europe is Possible tweeted aerial footage of the Whitehall demonstration and wrote: “Look at this, @Boris Johnson, you can’t claim to represent the will of the people.”

The group also expressed satisfaction with turnout across the UK. However the crowd on Whitehall filled only a relatively short section between the Cenotaph and Dover House, suggesting an attendance of only a few thousand. The crowd in Manchester appeared to number around 1,000, while around 200 people came to the event in Russell Square.

While a handful of rightwing counter-demonstrators appeared at both the Manchester and Whitehall protests, there were no reports of violence.

READ  Johnson goes back on trade deal pledges to Brussels