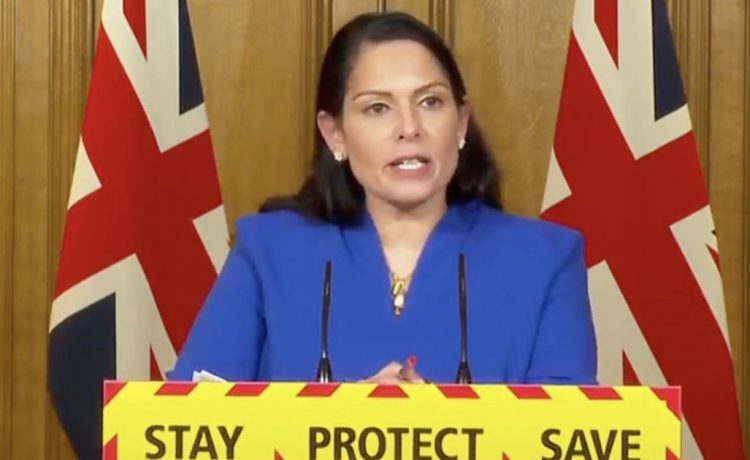 Priti Patel has warned police will enforce breaches of lockdown – after 45,000 fines issued to members of the public who have flouted the rules.

The Home Secretary told a Downing Street press conference a minority of people were “putting the health of the nation at risk by not following the rules.”

Her comments came as Boris Johnson was under pressure to explain having travelled seven miles from his home to ride his bike in the Olympic Park in Stratford – despite the public being told to stay at home.

Ms Patel warned: “If you do not play your part, our selfless police officers who are out there every day helping to keep us safe, they will enforce the regulations and I will back them to do so to protect our NHS and to save lives.”

Martin Hewitt, chair of the National Police Chiefs Council said police would “make no apology” for the 45,000 fixed penalty notices issued across the UK.

He said fines were doled out to people attending a boat party in Herefordshire, where 40 people had paid £30 a ticket to attend.

More were handed out to people taking a minibus from Cheltenham into Wales in order to go for a walk.

And in Surrey, a £10,000 fine was handed to the organisers of a party and claimed it was a business event.

Preventative measures were also taken, Mr Hewitt said – including against a 19 year old in Bristol who advertised an illegal rave on social media.

He said: “We will not waste time trying to reason with people like this”, adding the people who organised lockdown-breaking events are “dangerous, selfish and totally irresponsible.”

“And when it comes to staying at home that also means staying local.

No10 has insisted the Prime Minister’s Sunday afternoon cycle around the Olympic Park in East London did not break rules – despite orders to “stay local” when exercising.

A Downing Street spokesman insisted: “The Prime Minister acted in accordance with the Covid guidance while he was exercising. We have always trusted the public to exercise good judgment throughout the pandemic when we have asked them to exercise locally.”

The spokesman refused to say how far people can travel for exercise and sidestepped a question on whether people can drive or take public transport to exercise.

Asked if Mr Johnson regretted his bike ride, Mr Johnson’s press secretary Allegra Stratton told reporters: “He will be doing bike rides again, you all know how much he loves his bike.”

She told the BBC: “Anything that brings greater clarity for officers and the public in general will be a good thing.”

Dame Cressida stayed tight-lipped on what she thought of the PM’s jaunt, but added: “What I can say is it is not against the law.”

She vowed that officers would launch a fresh crackdown on rule-breakers amid surging Covid-19 cases.

He told Times Radio: “What we are asking people to do is when they exercise to stay local.

“If you can get there under your own steam and you are not interacting with somebody … then that seems perfectly reasonable to me.”