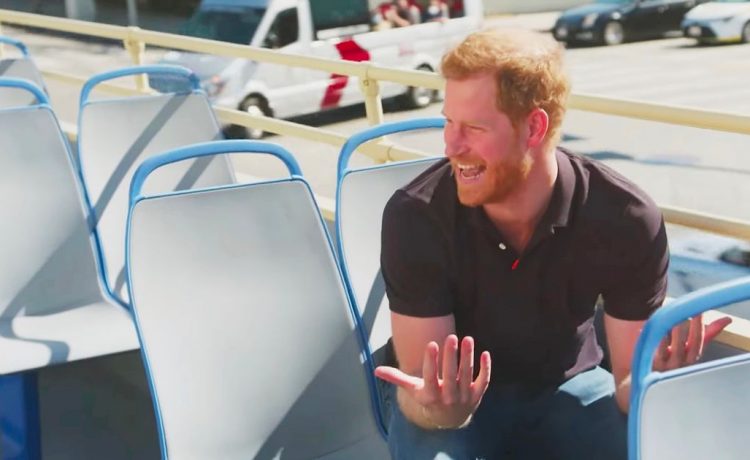 Prince Harry was tense when he talked about The Queen and William, while he relaxes to talk about Meghan Markle on the Late Late show claims an expert in body language.

Although the Prince revelled in his new freedom as he rapped, danced and spoke openly with James Corden, his body language betrayed what he really thought about the Royal Family, reports The Mirror.

During the chat, his first since quitting the royal family, Harry wowed with a performance of the Fresh Prince of Bel-Air theme tune during a visit to the mansion where the show was filmed.

On an open bus tour with James Corden, Harry opened up to speak adoringly of his ‘amazing’ son Archie and wife ‘Meg’ .

He was clearly comfortable to talk about the family he has mace for himself, but his chat about Meghan Markle and his son was very different to the way he held himself when he talked about brother Prince William and grandmother The Queen.

According to body language expert Judi James, as Harry discusses his grandmother he becomes instantly protective and guarded.

James Corden may have joked about playing Prince William on The Crown, but Harry’s smile suddenly vanishes and he is notably ‘poker faced’ and serious .

When Harry was asked why he ‘stepped back, not down’ from his duties in the UK, he appeared dismissive and even ‘sad’ as he talked about his changed role.

Judi who closely examined the 17 minute interview said: “If this skit is representative of the kind of rules Harry prefers when handling the press and dealing with his own privacy, it would be very easy to see some confusing and possibly conflicting-looking messages.

“This is very much ‘celebrity’ Harry – or ‘Haz’ as we discover he likes to be called by ‘Meg’ – and the congruence or lack of it at certain points of his interview provide interesting clues about his levels of comfort and desire to be open, or the possible discomfort and desire for privacy.

“Waiting in the street to be ‘surprised’ by the arrival of the bus, Harry places his hands on his hips to create an air of confidence, and he even rolls his shoulders as though prepping for a physical fight.

His first pose when sitting opposite Corden suggests some pre-interview anxiety as he performs a finger-pick ritual and seems to be leaning away from his host.

“But then comes the first moment of ‘confiding’ in Corden, telling him that he was ‘not allowed to’ go on open-top buses in the UK, and the way he pushes his chin out and drops his voice suggests the sense of restrictions in his life as a royal.

“Harry dresses like Corden and happily plays along with his host, showing what looks like a desire to perform as a celebrity in front of the camera.

He even raps a bit before joining in the double-act comedy on a trip to the loo and even walks away from the two-man ‘sketch’ leaping and prancing like an excited kid.

“Meghan is clearly caught on the hop – not! – as we see her perfectly framed and lit and looking gorgeous on the phone screen.

Harry stands in the background beaming with excited-looking love at his wife’s face and trying to get into shot like a man still besotted with his ‘Meg’ and possibly wishing she were there to help him out.”

Judi added: “Haz’s hand gestures as he talks about meeting and dating Meg are expressive, emphatic and open.

His use of illustrative movements suggest he is more than happy to tell the story of their first dates and how they fell in love. His legs are splayed to suggest confidence.

He also, like any besotted dad, looks more than happy to talk about his ‘amazing’ son. When he speaks about Meg making waffles for Archie he acts out the actual gestures in a long mime, looking happy to share the daily experience and even mimicking his son’s voice at one point.

She continued: ‘”Haz does begin to look more guarded when asked about the Netflix TV show The Crown.

His hands come up in a more protective-looking barrier gesture and as they clutch in front of his chest he appears to be fiddling with his wedding ring, which is often seen as a self-comfort ritual that suggests a desire to be with your partner.

“When he goes on to speak about ‘My grandmother’ his arms also pull closer to his torso and he crosses one across his body in a partial barrier gestures.

He tries what sounds like a verbal swerve but Corden pulls it back to the Queen and Haz is seen adopting another self-protective-looking pose known as the ‘Fig Leaf’.

“There is one point when the body language mood appears to change, when Corden suggests he (Corden) could be cast as William in The Crown.

There is a pause before the camera moves to Haz’s face and suddenly he is in poker-face mode, with one elbow on the back of his seat and the hand part-covering a very serious facial expression.

Harry’s eyes look away to the distance and although he makes a small joke his face is unsmiling at this point.

“Harry appears to want to make light of his new role in the royal family, though.

Lolling in what looks like a relaxed pose he waves his hands in the air as he speaks and performs hand-twist gestures and thumb-jerks, seeming to want to diminish any idea of difficulty or challenge.

Even when he says his aim is now to ‘Bring compassion, make people happy and try to change the world’ his relaxed hand gestures suggest he sees it as a task that should not be seen as difficult or daunting.

“Harry’s quote about leaving the royal family: ‘Stepping back, not stepping down’, comes with some signals of discomfort though.

“He looks down in a cut-off as he shakes his head and rubs his hand down his thigh several times, suggesting what might be some sadder emotion.

“He uses some strong dismissive gestures when referring to the UK situation, though. ‘Whatever decisions are made on that side’ is said with a shake of the head as he stretches an arm out behind him in a pushing away gesture.

“The last scene involves an assault course challenge with James referring to Harry’s army experience before doing a comedy race.

Harry clearly appears to not be haunted by the spectre of the infamous ‘Royal It’s A Knock-out’’at this point, standing with legs splayed in full alpha mode.

It was an event like this that set the royal firm back a few years in the UK but Harry’s celebrity skills of humour appear more than up to the task in the US.”