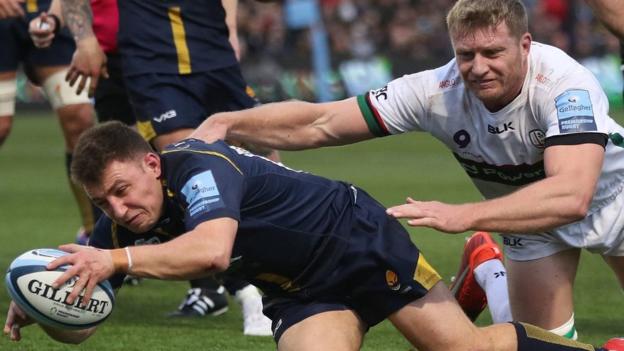 Worcester Warriors bounced back from their pre-Christmas thumping at Gloucester as they beat 14-man London Irish at Sixways.

Irish led early on following a Stephen Myler penalty but home stand-off Duncan Weir turned it round, improving his own try, as well as kicking two penalties.

But the game turned in the space of just three minutes as Allan Dell was sin-binned and Motu Matu’u red carded.

Jono Lance’s converted try was the only score of a very poor second half.

Having enjoyed seven minutes of playing against 13 men before the break, Worcester then became stymied when Dell’s return brought the Exiles back to just a one-man disadvantage.

Despite playing in front of an 11,000 capacity crowd for the first time this season, the contest disintegrated into a dreary scrum-strewn second period.

For the final 10 minutes, it was back to even numbers again at 14-a-side when Chris Pennell was also yellow carded following a try-saving tackle on Tom Stephenson that was ruled too high.

But, for Irish, it had been an uphill battle once hooker Matu’u had been handed his 34th-minute red card by referee Ian Tempest, who had only just despatched his front row partner Dell to cool off for 10 minutes for charging dangerously into a ruck.

It left the Exiles to play the whole of the second half a man short for the second away league fixture in a row. But, while they were able to make light of prop Ollie Hoskins’ dismissal at Bristol earlier this month, going on to secure a 27-27 draw, there was to be no repeat.

The visitors held out until the 59th minute when scrum-half Francois Hougaard broke down the blindside before combining cleverly with winger Perry Humphreys to provide Lance with an easy run-in.