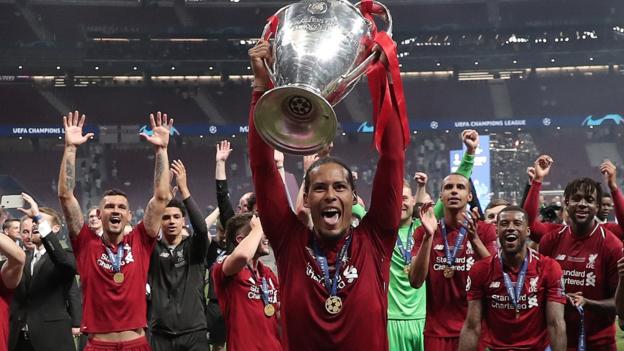 Champions Manchester City will open the defence of their title the following day with a trip to West Ham.

For the first time in Premier League history, the clubs will get a short mid-season break in February.

The break will be staggered over a two-week period. There will be only five matches on one weekend, with the other five games from that round taking place the following weekend, ensuring that each team gets one week off.

The opening weekend in full

Busy start for some teams

The season’s curtain raiser will take place with the Community Shield between Liverpool and Manchester City at Wembley on Sunday, 4 August.

Liverpool and Europa League winners Chelsea will also meet in the Uefa Super Cup in Istanbul, Turkey, on Wednesday, 14 August.

Wolves could have played three Europa League qualifying matches before the beginning of the Premier League season.

The mid-season break in more detail

The split of matches in February will see five matches take place over the weekend of 8 February, with the other five played on the weekend of 15 February.

All five matches on each weekend will be broadcast live in the United Kingdom.

At present, all the games are scheduled for 8 February but these will be broken up when the broadcast picks for that period are announced in mid-December.

The Premier League contingent taking part in the Champions League are Chelsea, Liverpool, Manchester City and Tottenham and they will go straight into the group stage, which starts on 17 and 18 September.

City will be away three times before playing in Europe, while Tottenham will be on the road for two.

The Gunners have away games before four of their six group matches, including ones against Manchester United and West Ham.

Manchester United have three, including a trip to City, while, if they qualify for the group phase, Wolves will also have three.

The first Merseyside derby, which will see Liverpool host Everton during a round of midweek fixtures in early December, will be shown on Amazon TV, a new entrant to the list of broadcasters of top-flight games.

It will also show the Boxing Day list of fixtures and broadcast live in the UK every game over the two rounds to which they have rights.