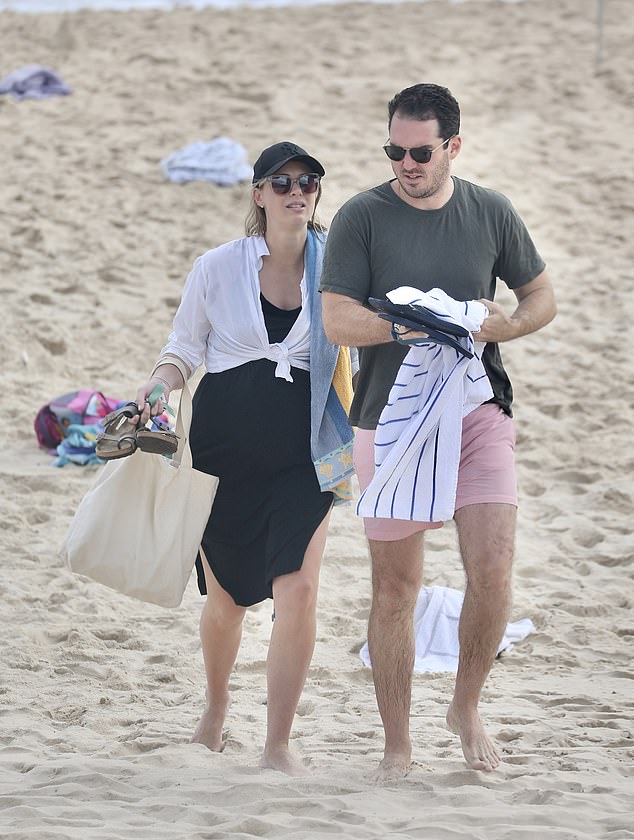 Baby on board! Heavily pregnant Sylvia Jeffreys and husband Peter Stefanovic enjoy a relaxing day at the beach in Noosa

Peter Stefanovic and his pregnant wife, Sylvia Jeffreys, are in Queensland for their New Year’s celebrations.

And on Tuesday, the happy couple were spotted relaxing at the beach in Noosa.

Sylvia, 33, looked comfortable in a black summer dress with a white shirt knotted over the top.

Out and about! Peter Stefanovic (right) and his pregnant wife, Sylvia Jeffreys (left), were spotted at the beach in Noosa, Queensland, on Tuesday

Perhaps in a bid to avoid being recognised, the mother-to-be kept a low profile by wearing a baseball cap and sunglasses.

Peter, 38, also flew under the radar in a pair of pink boardshorts and a green T-shirt.

The sighting comes one day after Peter’s brother Karl and his pregnant wife, Jasmine Yarbrough, were also spotted at the same beach. 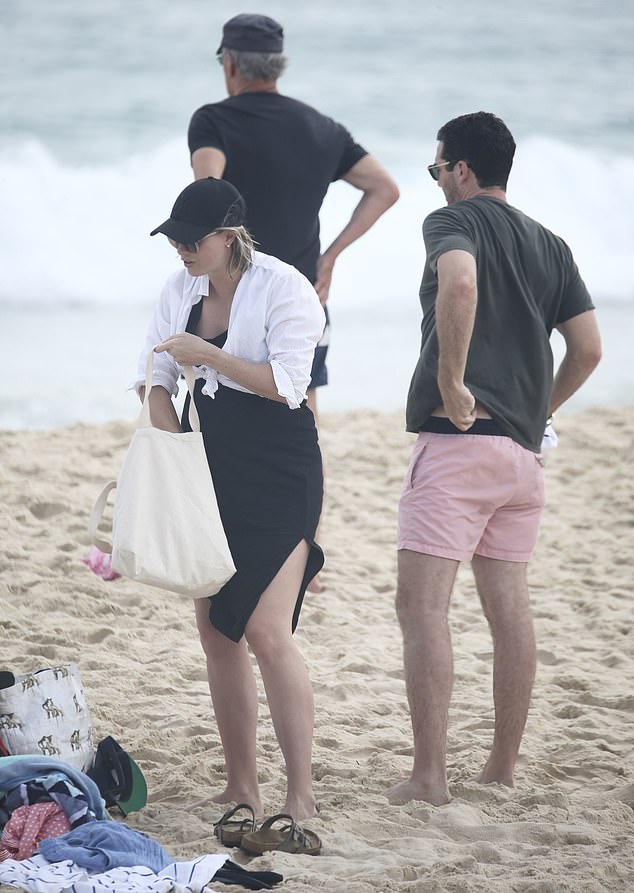 Relaxed: Sylvia, 33, looked comfortable in a black summer dress with a white shirt knotted over the top 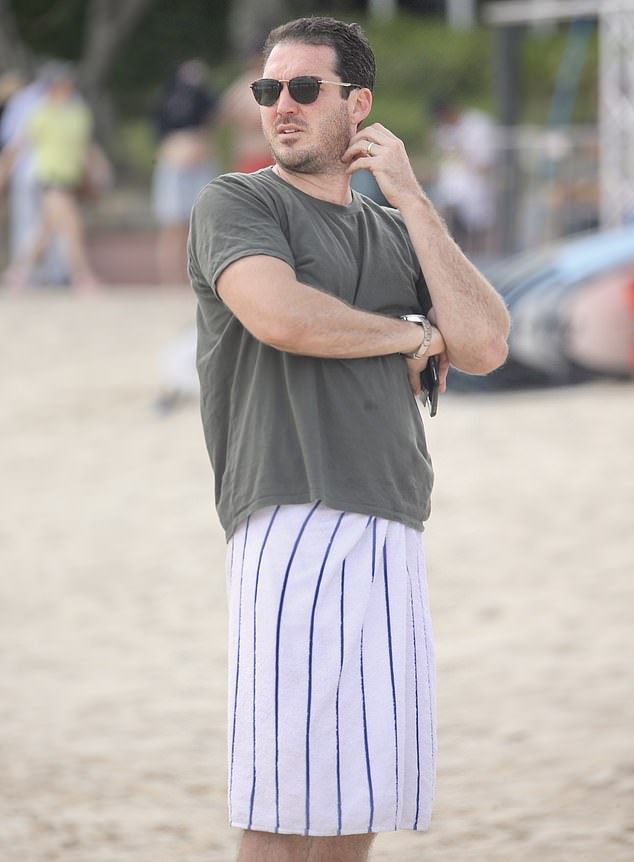 Casual: Peter, 38, kept a low profile in a pair of pink boardshorts and an olive green T-shirt 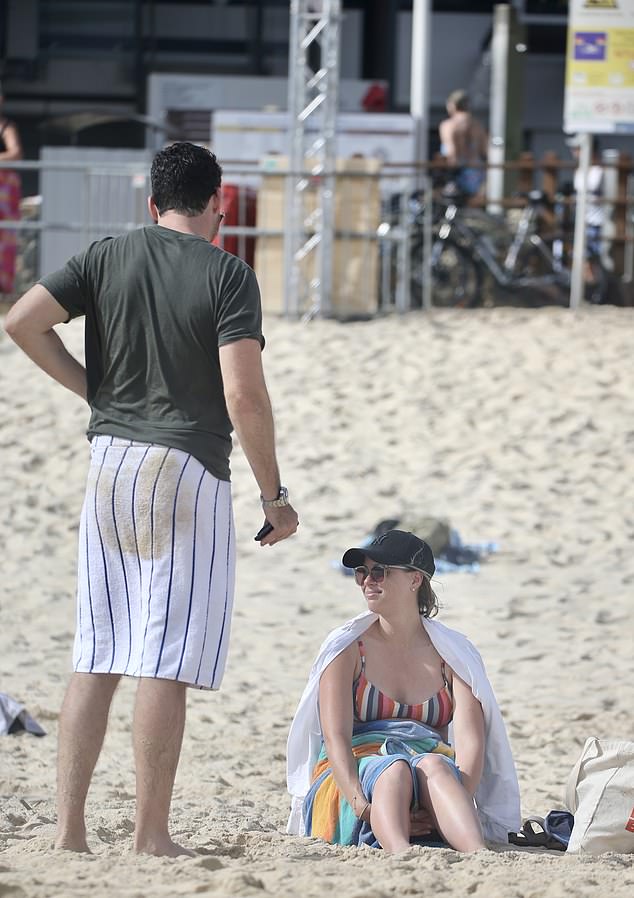 Sandy: Peter’s towel was covered in sand from where he was sitting 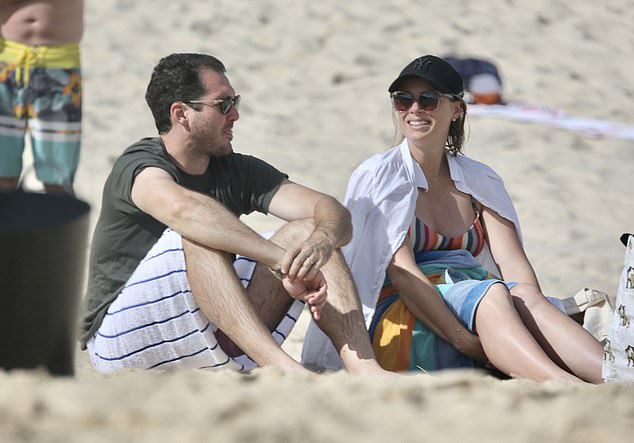 Happy days: Sylvia flashed a smile as she enjoyed a friendly conversation with Peter

With both couples in Noosa at the same time, it’s would appear the Stefanovics are there to celebrate New Year’s Eve together.

She uploaded a photo of herself and Peter posing next to their Christmas tree, alongside the caption: ‘Happy Christmas to all, from all four of us (including Pete’s lasagna bump).’ 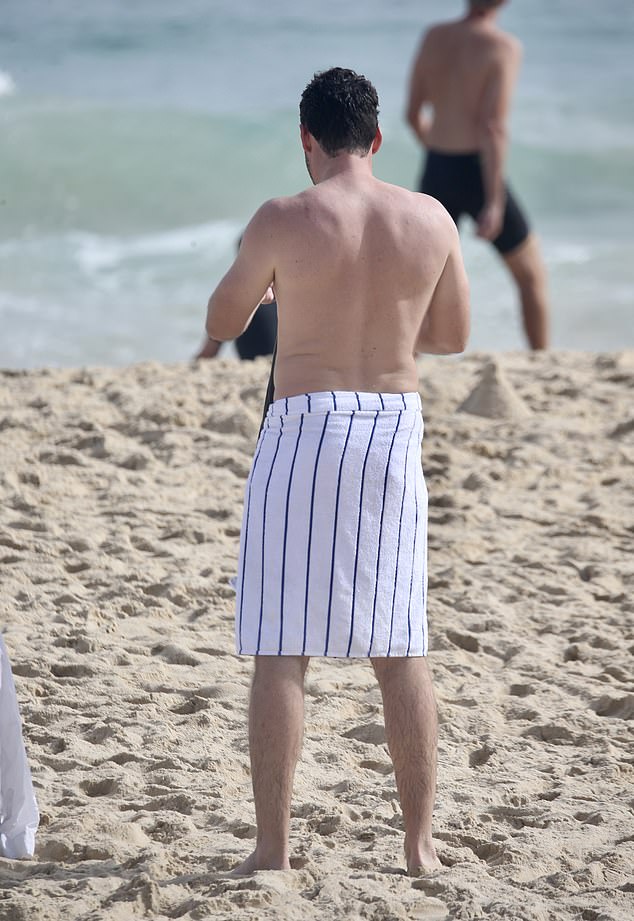 Quick change! Peter changed into his swimwear on the warm sandy beach 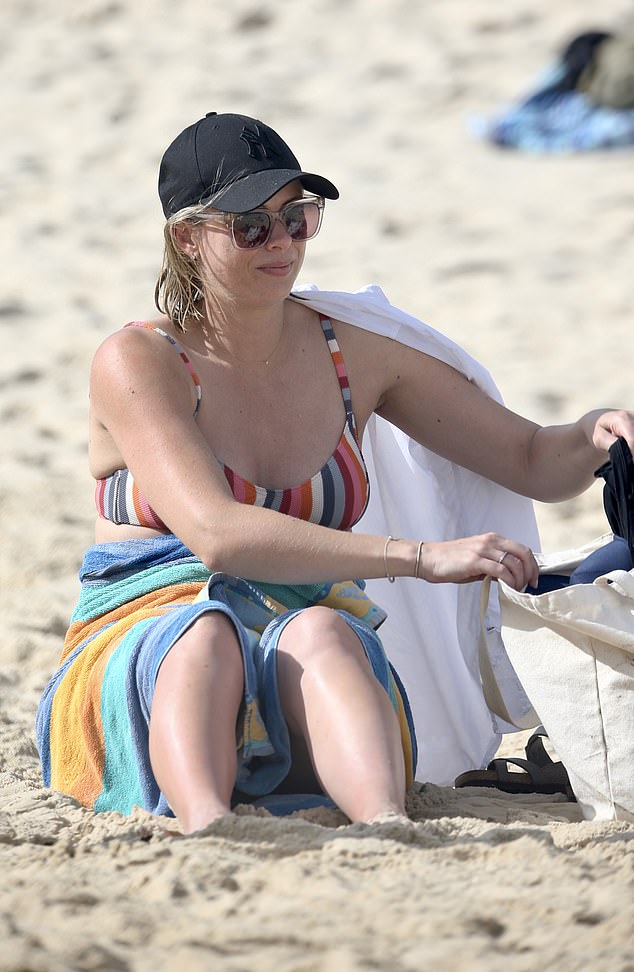 Going incognito: Perhaps in a bid to avoid being recognised, the mother-to-be kept a low profile by wearing a baseball cap and sunglasses 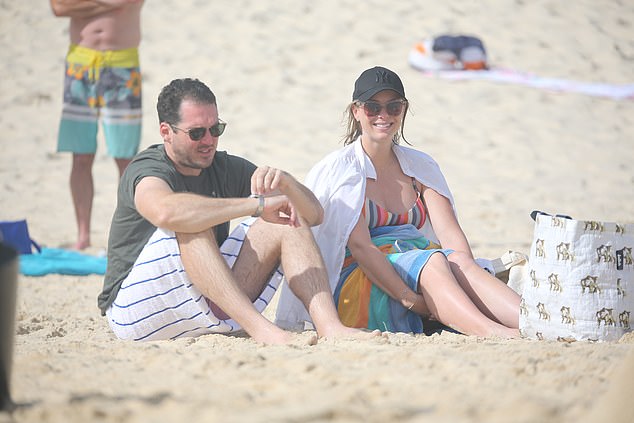 Time’s up! Peter stared wistfully at his wristwatch as a pregnant Sylvia smiled and chatted

She was of course referring to her husband’s bloated stomach and not a second baby, but this didn’t stop fans from speculating.

Later in her caption, Sylvia thanked the firefighters working over Christmas.

She wrote: ‘Sending love and thanks to the selfless heroes who’ve left their homes to protect others this holiday season. May 2020 bring rain, rain and more.’

Sylvia, who announced her pregnancy in August, had two baby showers earlier this month: one in Sydney and the other in her home town of Brisbane. 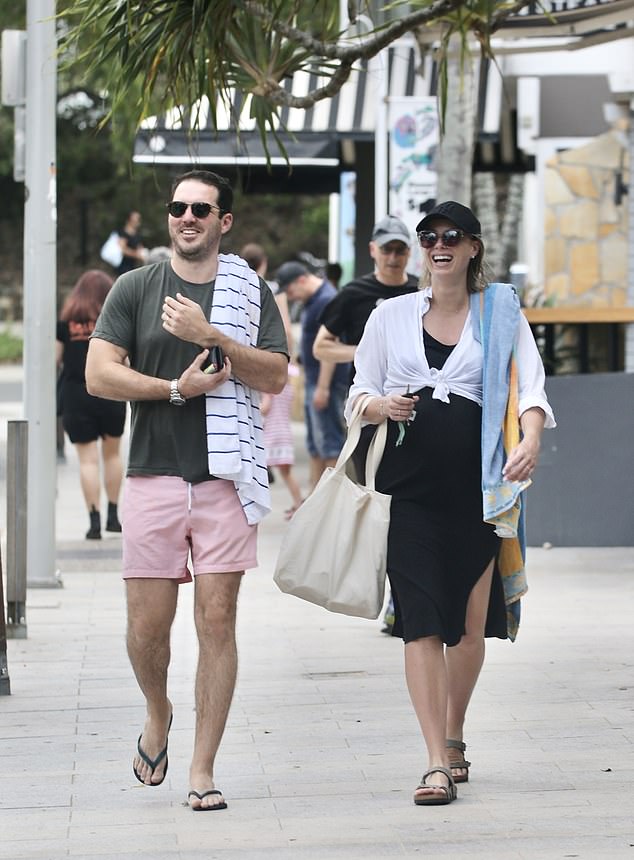 All smiles! Peter and Sylvia simply couldn’t wipe the beaming smiles from their faces as they strolled down the street 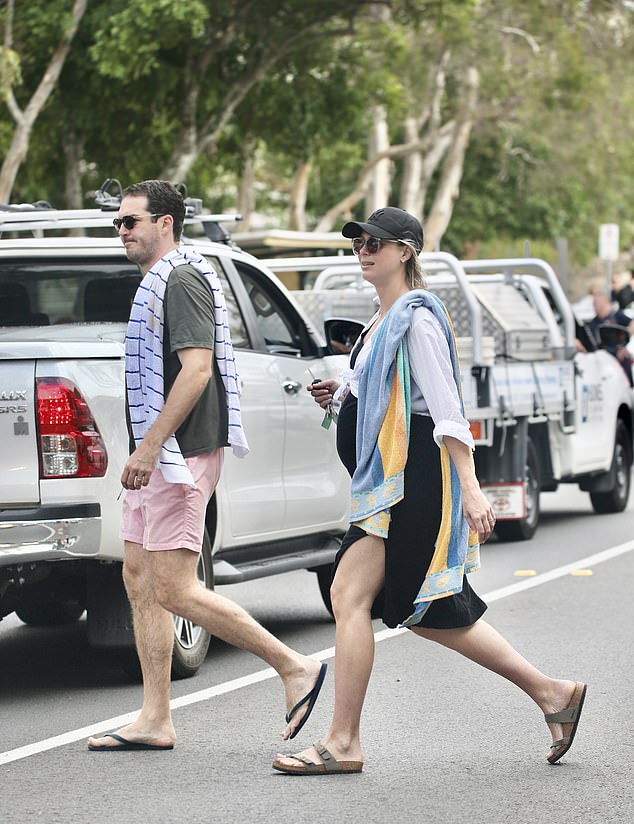 Style: Sylvia, 33, looked comfortable in a simple black summer dress with a white shirt knotted over the top 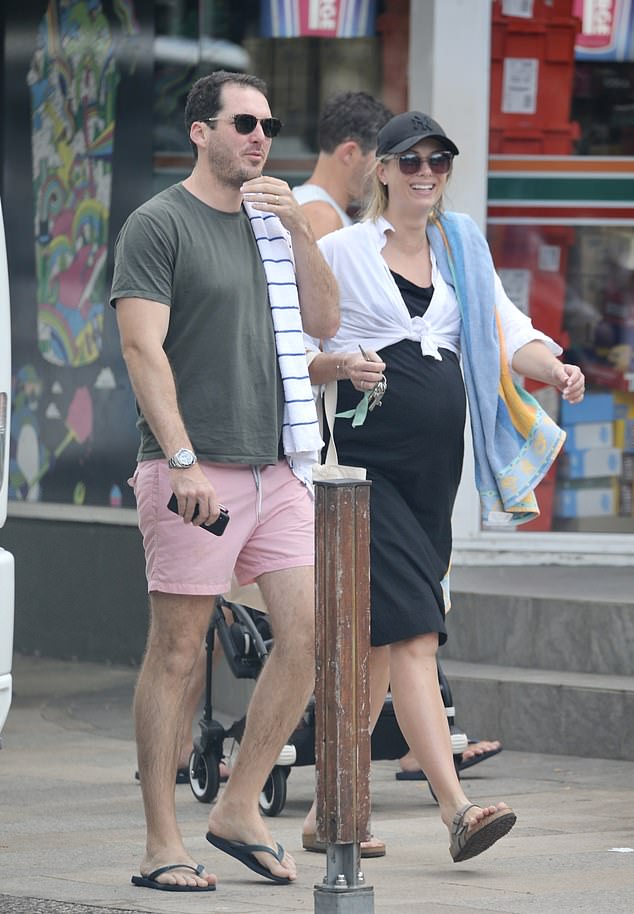 Bumping along! Sylvia proudly flaunted her growing baby bump as she walked down the street