Nicki Minaj revealed on Monday that she is pregnant with her first child.

The 37-year-old rapper shared a stunning image to Instagram where she cradled her bare baby bump as she wore a floral mesh string bikini and silver platform high heels.

The Anaconda singer kept it simple with her caption, only writing ‘#Preggers’ and adding a yellow heart emoji. 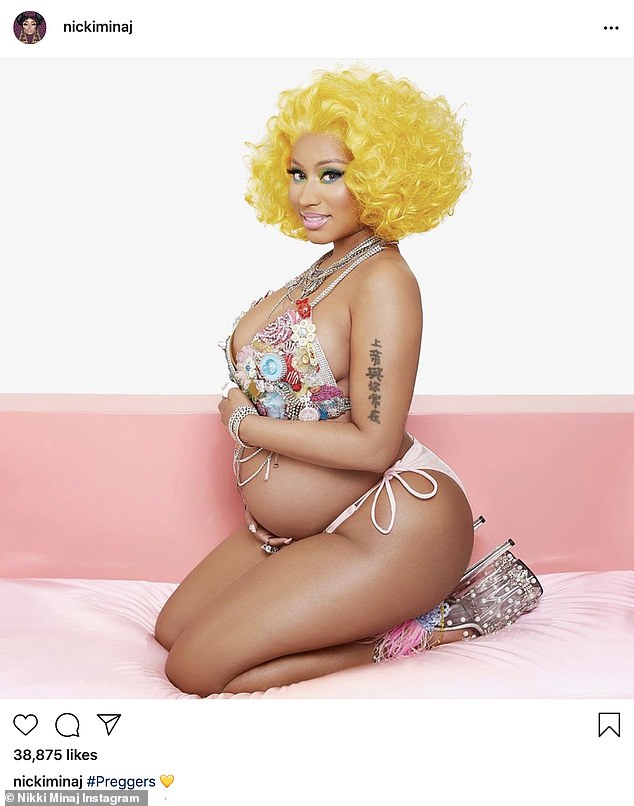 Baby time: Nicki Minaj revealed on Monday that she is pregnant with her first child. The rapper shared a stunning image to Instagram where she cradled her baby bump as she wore a string bikini and platform high heels 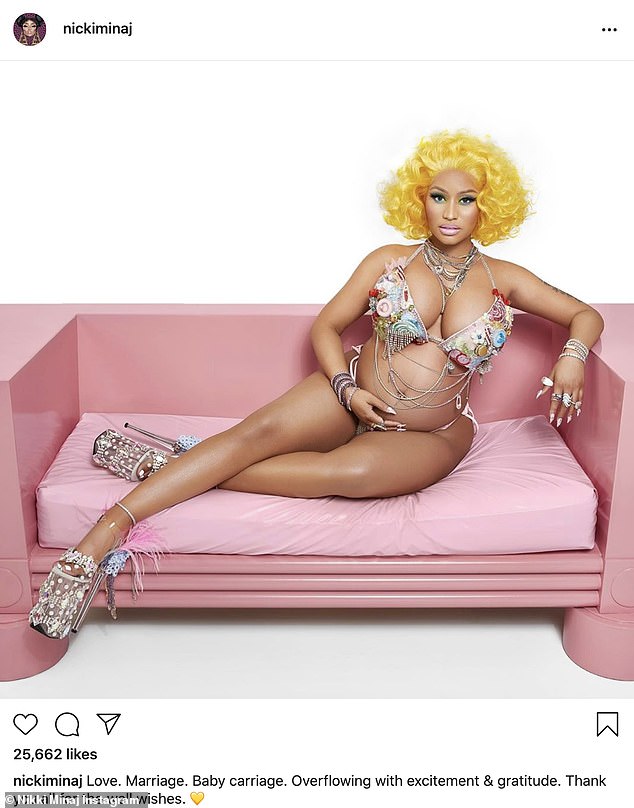 Laid back look: In this image, the sultry singer was sitting on a day bed in pink and mauve hues

The siren had on a yellow curly wig with heavy makeup and showed off her arm tattoo as she smiled at the camera.

There was also a second photo with a blue wig and another decorated bikini. In this one, she added white thigh high stockings.

Her husband is 42-year-old Kenneth ‘Zoo’ Petty, whom she tied the knot with in 2019. He is a convicted sex offender.

For months there have been rumours that the chart-topping singer was pregnant, but she never confirmed nor denied.

In June she shared a busty photo but not her tummy as she seemed to only fuel those rumours. 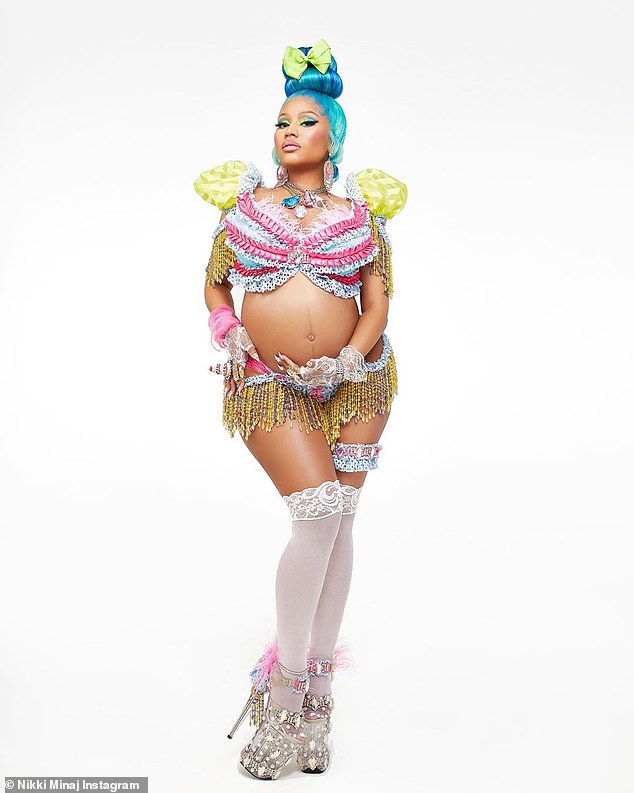 Belly proud: There was also a second photo with a blue wig and another decorated bikini. In this one, she added white thigh high stockings

Nicki pouted down the lens whilst sporting a coral and blonde wig that she styled in high bunches.

The Bang Bang hitmaker showcased her ample assets in the snap, protecting her modesty with a colourful star shaped nipple pasties.

The selfie was taken when Nicki filmed the music video for her new single Trollz, in which she spends much of the clip topless.

She is joined in the video by the controversial rapper Tekashi 6ix9ine, who is currently under house arrest. 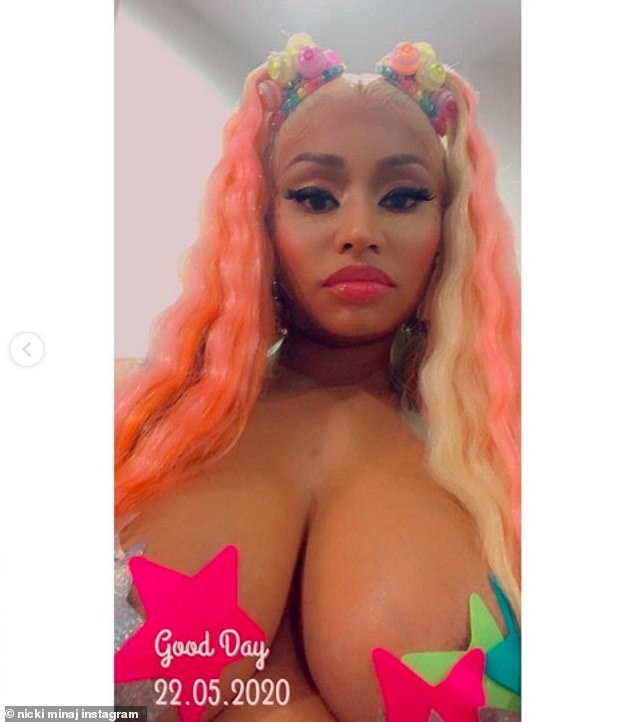 Glowing: In June she shared a busty photo but not her tummy as rumours swirled she was with child. She was asking fans to recommend her some ‘comfortable’ bras 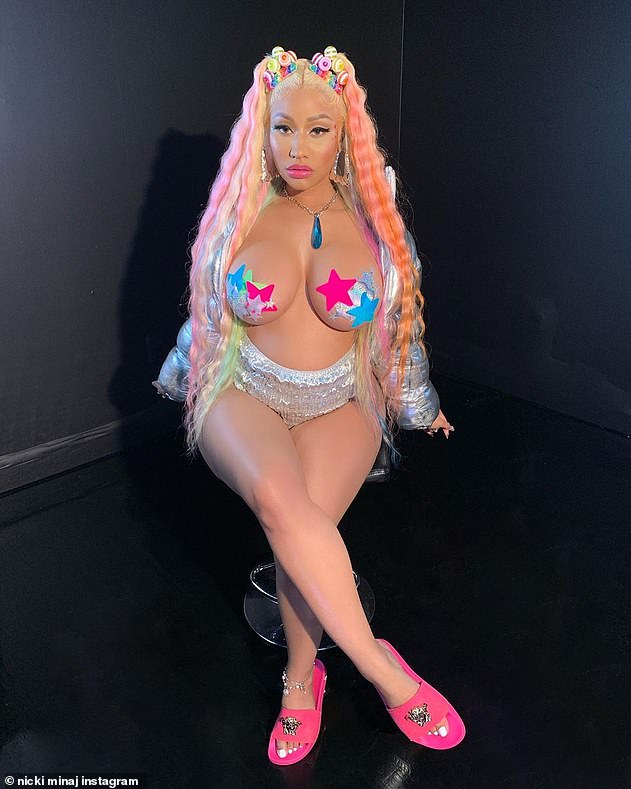 Speculation: Nicki recently fuelled pregnancy rumours with a topless snap whilst covering up her stomach with a pair of high waisted silver shorts

Captioning her snap, Nicki penned: ‘Oh hey if u wear a triple D cup/double E cup or bigger, what bra is actually comfortable on u? Asking for a friend. [sic]’.

Nicki fueled pregnancy rumours in May when she shared another topless snap to promote the video.

Many fans focused on the seemingly strategic way she was ever-so-slightly covered up, with a pair of high-waisted silver shorts sheathing her midsection.

Nicki also strategically covered her stomach in new snaps to promote the release, whilst posing in front of the Baby Shark.

Many fans took her choice to be photographed with the catchy children song’s mascot as a clue she’s ready to announce her pregnancy. 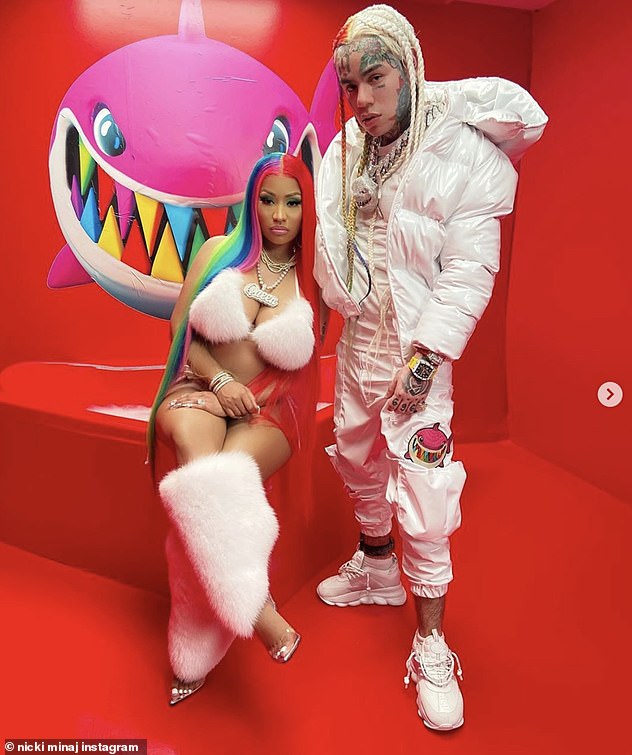 Teasing: This comes just days after she once again fueled pregnancy speculation as she strategically covered her stomach in new snaps to promote the release

Back and forth: In another exchange, a Nicki ‘barb’ (the term coined for her loyal fans) asked the Super Bass singer about pregnancy symptoms (tweet from May 7)

Also in May, Nicki tweeted ‘the world ain’t ready yet’ when asked for a snap of her baby bump by a curious fan.

In another exchange, a Nicki ‘barb’ (the term coined for her loyal fans) asked the Super Bass singer, ‘Are you also throwing up in morning and having to go to the bathroom a lot?’

Nicki responded, ‘Lmao. No throwing up. But nausea and peeing non stop. Omg what do u think this means guys???? Lmaooooooooooo.’

Nicki listed the bizarre food combinations she had been cooking up. When one fan asked her if she had been cooking anything in recent weeks, she said: ‘Absolutely. Steak. Shrimp. Plus my famous cheeseburgers. So good. Been rlly having red meat cravings then salad cravings with extra jalapeños. Ordered Chkn nachos that didn’t come w/jalapeños. Who does that? Wow.’

Also in June, she talked about her marriage to ‘Zoo.’

‘I didn’t think it would be as refreshing and calming as it is,’ admitted the rapper during her appearance on Young Money Radio with Lil Wayne.

‘Even if you’re not married, when you have someone that feels like your soulmate or someone who understands you, it just makes you feel like you’re on top of the world.’ 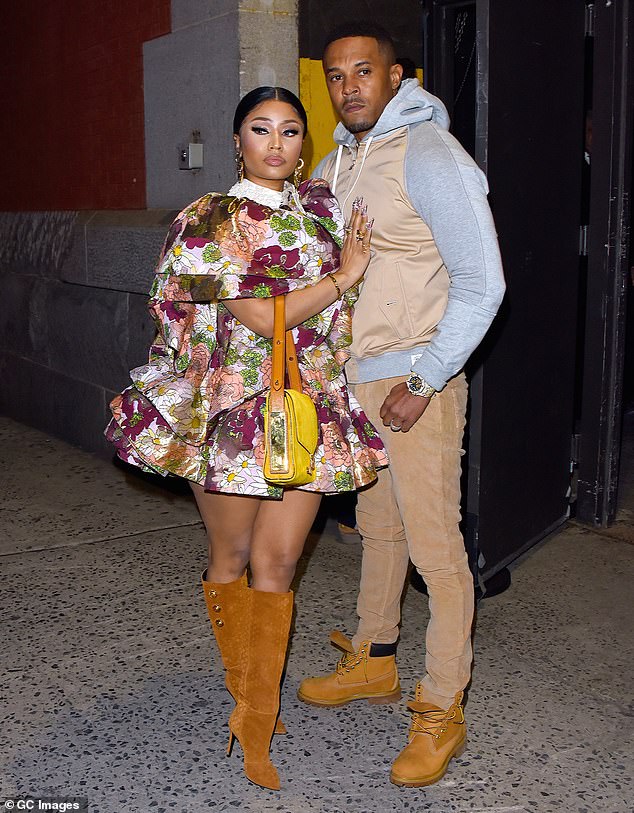 Nicki told host and fellow rapper Lil Wayne that life at home with Petty has been ‘good, good, good.’

Nicki and Kenneth – who began dating in the latter end of 2018 – tied the knot in October of last year.

Though they only dated a little over the year before pronouncing themselves husband and wife, Nicki confirmed via her verse in Chance The Rapper’s track Zanies and Fools that she has known Kenneth for years.

In the song, Minaj raps: ‘I met my husband when I was 17 out in Queens/ If you love it, let it go, now I know what that means.’

Since saying ‘I do,’ fans and the hip hop world have speculated as to when Nicki might entertain growing her family. 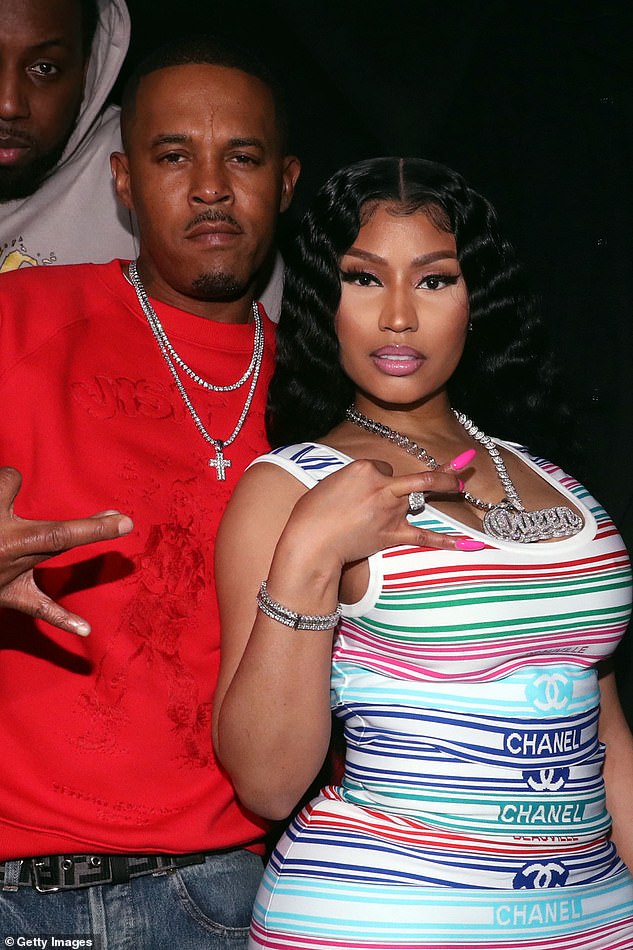 Newlyweds: Nicki and Kenneth – who began dating in latter end of 2018 – tied the knot in October of last year; Kenneth and Nick pictured in 2019