Just a week after doctors performed a ‘hair raising’ robotic chest surgery to correct a rare condition threatening the life of her unborn baby, Mizel Tavarez was home, just in time to spend Thanksgiving with her growing family.

Mizel, a 39-year-old mother-of-three from New York, wants to have more children, but she suffered two miscarriages and was recently diagnosed with hyperparathyroidism due to a tumor on a set of thyroid glands.

Worse yet, the condition can cause miscarriages like the devastating ones Mizel had already endured, so when she got pregnant again earlier this year, her doctors advised she have the condition surgically fixed as soon as possible. 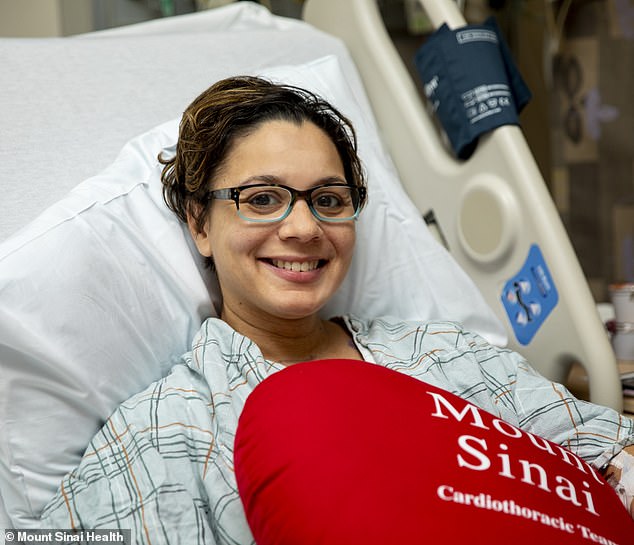 Mizel Tavarez’s thyroid glands developed in her chest instead of her neck, meaning she had to have a high-risk chest surgery to stop them from overproducing calcium and potentially causing her to miscarry her pregnancy

But there was yet another catch: Mizel’s parathyroid glands were misplaced, sitting in a high-risk spot near her heart instead of in her neck, meaning she’d major surgery.

Fortunately, a high-tech robotic surgery saved Mizel the painful and traumatic open chest surgery she would otherwise have had to undergo, likely saved her developing baby’s life and got her back home in time for Thanksgiving.

Mizel never had any particularly obvious symptoms from her hyperparathyroidism.

But for years she’d felt a little foggy, a little achy for her young age, and a little more tired than it seemed she should.

‘My brain felt full of molasses,’ she told DailyMail.com.

‘I consider myself a really good conversationalist, and it was so frustrating when I couldn’t do that. I’m only in my 30s!’

And then there were the miscarriages.

Mizel already had three children – a 22-year-old daughter, Jenna, and sons Bryce and Adam, ages 14 and 12.

But when she and her husband, Ray, decided they wanted to have another baby, Mizel had two miscarriages in two years.

Last summer she developed kidney stones and had to go to the hospital.

When doctors analyzed Mizel’s blood, they found that her calcium levels were through the roof.

Her thyroid condition was causing Mizel’s body to over-produce calcium – a problem that probably caused her kidney stones and milder symptoms like soreness, but can be fatal to a fetus.

‘Two years prior, I had a miscarriage as well, and doctors told me that was probably the reason why,’ Mizel said.

Doctors explained that her disorder could be fixed with surgery.

But Mizel had  other things on her mind.

‘After the miscarriage, I really kind of put the procedure on the back burner, I was just going through that, and it wasn’t easy to deal with,’ she says.

Then, she got pregnant again, and she and her medical team had to kick things back into gear.

If she didn’t have her hyperparathyroidism fixed, and soon, her risk of miscarriage would be high and even if she carried to term, Mizel’s baby would be at risk of inheriting her condition or, much worse, developing the opposite one – a deficit of calcium linked to brittle bone disease and other conditions.

The condition is caused by a benign tumor, called an adenoma, on one or more of the glands running through the front of the neck, which doctors then need to find and remove. 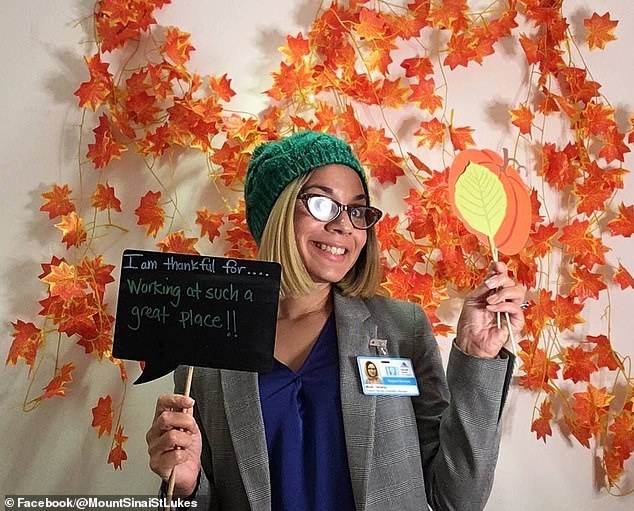 Prior to her diagnosis last summer, Mizel, 39, had no idea why she’d suffered two miscarriages. Doctors told her her hyperparathyroidism and high calcium levels were likely to blame

But Mizel’s team at Mt Sinai was having an unusually hard time locating the tumor.

Her surgeon, Dr David Kaufman, at Mt Sinai Health, told DailyMail.com that ‘99.99 percent of the time, it’s anatomically in the position it’s supposed to be in.

‘But this is where the story gets a little weird.

‘When a fetus is growing in your mom, we’re basically a bunch of jell-o developing around a central tube and different areas around the tube will ultimately grow into who we are as a full-grown human being.’

From that amorphous blob, brain cells drift upward, guts drift downward and so on.

Some organs and tissues that may develop in the same area of the ‘jell-o’ ultimately move to distant areas of a fully-developed body.

‘But sometimes, organs [in the chest] grab the parathyroid and take it with it,’ explained Dr Kaufman.

‘It’s like it didn’t get the directions correction and went south when it should’ve stayed in place.’

That was what had happened when Mizel was developing, apparently.

The AP or aortopulmonary window is so named because both the aorta and the pulmonary artery, the two primary arteries, meet the heart. Any operation in this space is dangerous because a nick to these arteries can lead to massive, even fatal, blood loss.

On top of that, a bundle of nerves that allow the voice box and vocal cords to operate properly sit in the AP window. 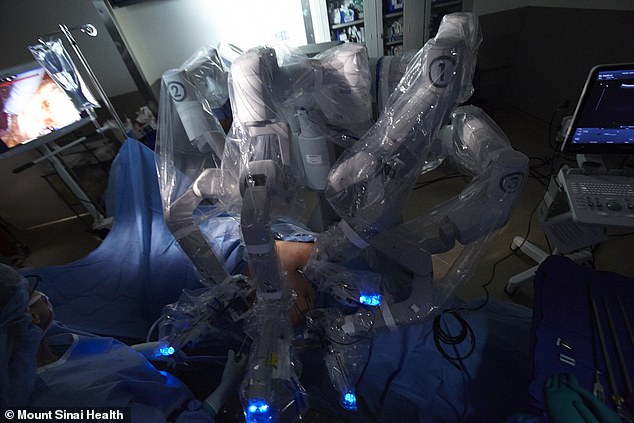 In a three-hour operation, Mt Sinai doctors removed the tumor causing Mizel’s hyperparathyroidism with a multi-armed robot, sparing her from having her sternum cracked

Damage to these nerves wouldn’t deprive Mizel of her voice entirely, but it could leave her chronically hoarse and unable to sing.

Singing is ‘something I enjoy and part of who I am, and my personality,’ Mizel said.

‘So this case is a little hair-raising,’ said Dr Kaufman, especially because ‘we don’t just have one person on the table, one mom, but a mom on the table with a baby on board is the real deal.’

And in order to access that critical window, Dr Kaufman and his team, in a traditional surgery, would need to crack Mizel’s chest bone open, potentially traumatizing her and the 18-week-old baby she’d be carrying.

‘Really, just saying the phrase “cracking the sternum” causes anyone to cringe and when you think about all the risks about it exposing your whole body to open air, and recovering from the trauma, that I don’t know if I would’ve been able to continue the pregnancy with trauma like that,’ Mizael said.

Luckily, the surgery could be done with a multi-armed robot instead.

It took Dr Kaufman and his team – which included endocrinologists, obstetricians and even a heart surgeon – just three hours to use the robot to remove Mizel’s tumor.

‘I woke up from surgery and felt like I got hit by a truck, but the baby was fine, the heartbeat was like wildfire and he was perfectly fine.

She spent a week in the hospital and then was able to go home on Tuesday – just in time for Thanksgiving.

Mizel is sore, and rightfully refusing to lift a finger if she doesn’t have too, but said she ate well with her immediate family and godparents.

‘Even though physically I don’t feel so good, the biggest challenge was fearing I was going to lose another pregnancy and I’m so happy now taht all I have to focus on is the pregnancy and have fun with it and not worry if I’m going to have a  miscarriage,’ she said. 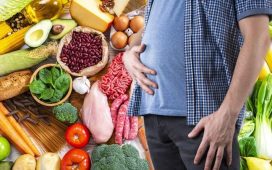 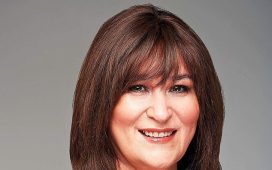 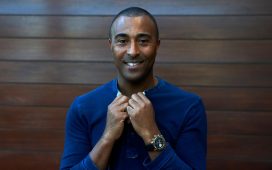 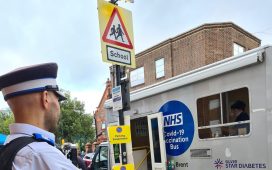 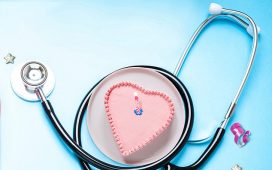