She is currently seven months pregnant with her second child and is expected to give birth in April.

And on Sunday, Catherine Tyldesley showed off her pregnancy curves in lingerie as she revealed that she experiences ‘loss of vision’ and cries alone, while insomnia means she can ‘barely get out of bed’ some days.

The expectant mother, 38, who is married to photographer Tom Pitfield, took to Instagram where she posted the scantily-clad snap of herself and detailed her third trimester struggles in a lengthy caption alongside. 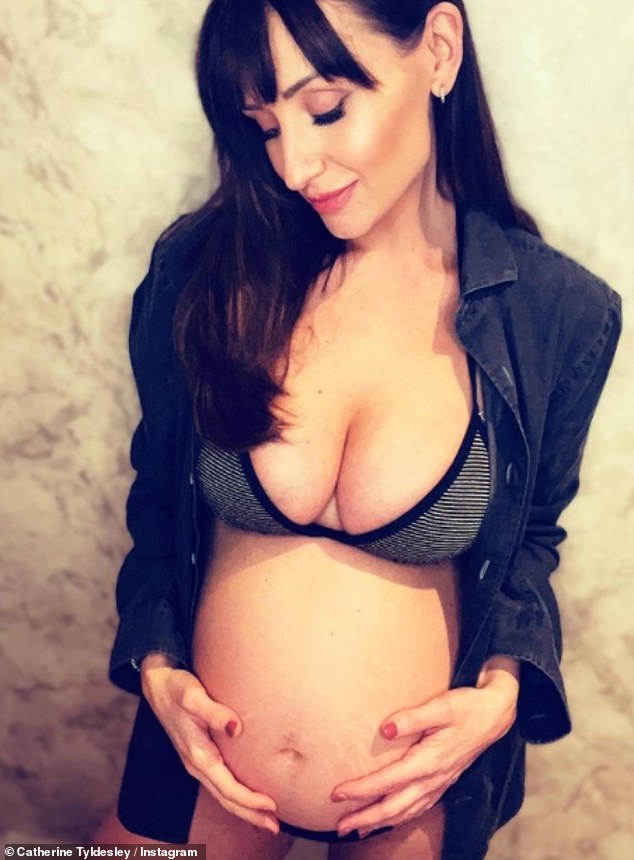 Revealing all: On Sunday, Catherine Tyldesley, 38, took to Instagram where she showed off her pregnancy curves in lingerie as she revealed she experiences ‘loss of vision’ and cries alone

‘Regardless of whether it’s their second, third, fourth child. I began to see very early on, that this pregnancy was COMPLETELY different from my first.

‘Not knowing how I am going to feel from one day to the next makes me feel weak. I hate feeling weak- mentally or physically. I hate ‘giving in’ … and certainly don’t like ‘giving up’.

‘Each day has brought me new obstacles- my hormone sensitivity means- some days I am met with loss of vision at several points during the day through ocular, hormone related migraines. 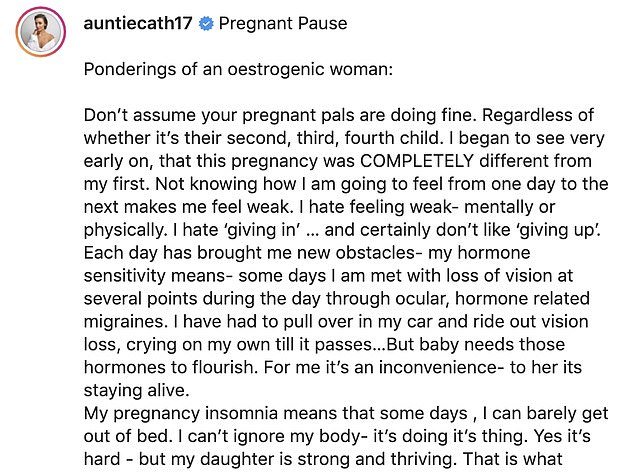 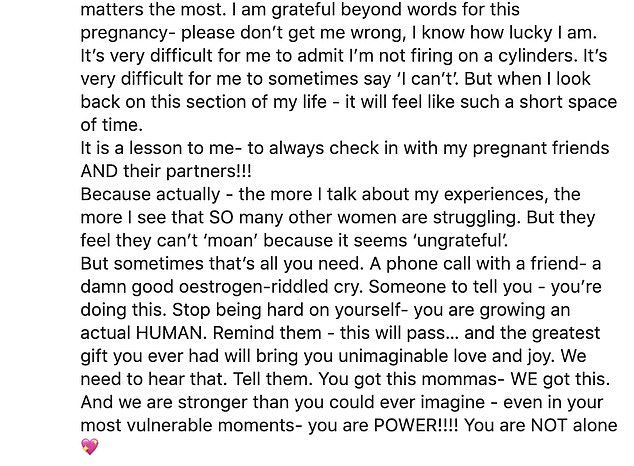 Candid: The expectant mother posted the scantily-clad snap of herself and detailed her third trimester struggles in a lengthy caption alongside

‘I have had to pull over in my car and ride out vision loss, crying on my own till it passes… But baby needs those hormones to flourish. For me it’s an inconvenience- to her it’s staying alive.

‘My pregnancy insomnia means that some days, I can barely get out of bed. I can’t ignore my body- it’s doing it’s thing. Yes it’s hard – but my daughter is strong and thriving. That is what matters the most.

‘I am grateful beyond words for this pregnancy- please don’t get me wrong, I know how lucky I am. It’s very difficult for me to admit I’m not firing on a cylinders.

‘It’s very difficult for me to sometimes say ‘I can’t’. But when I look back on this section of my life – it will feel like such a short space of time. It is a lesson to me- to always check in with my pregnant friends AND their partners!!! 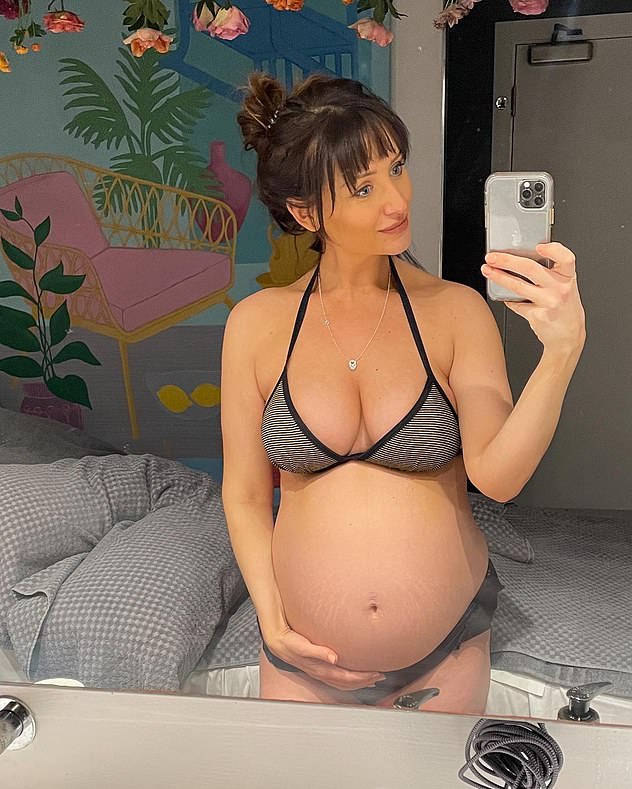 Oh dear: Last month, the former Coronation Street actress revealed she’s been experiencing searing pain in her crotch and compared the discomfort to being stabbed by knitting needles

‘Because actually – the more I talk about my experiences, the more I see that SO many other women are struggling. But they feel they can’t ‘moan’ because it seems ‘ungrateful’.

‘But sometimes that’s all you need. A phone call with a friend- a damn good oestrogen-riddled cry. Someone to tell you – you’re doing this. Stop being hard on yourself- you are growing an actual HUMAN.

‘Remind them – this will pass… and the greatest gift you ever had will bring you unimaginable love and joy. We need to hear that. Tell them.

‘You got this mommas- WE got this. And we are stronger than you could ever imagine – even in your most vulnerable moments- you are POWER!!!! You are NOT alone.’ 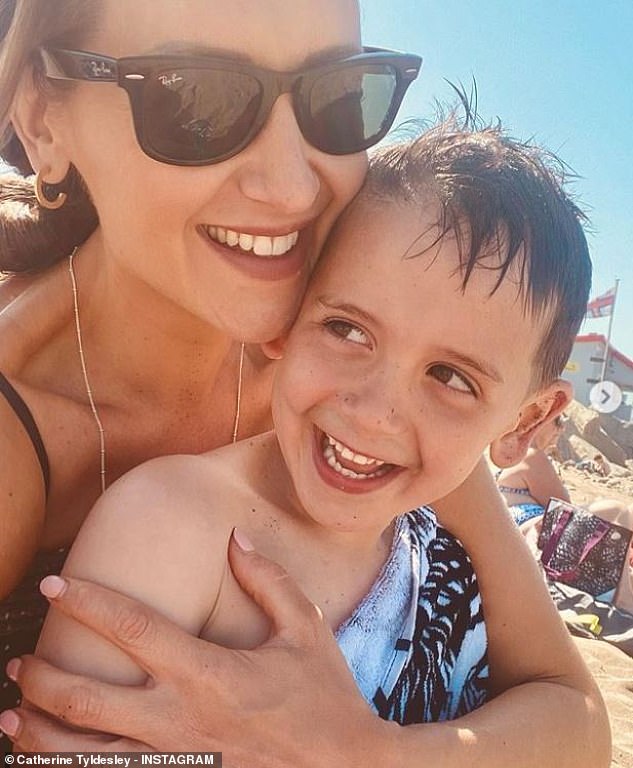 Mum’s the word: Catherine is already mum to son Alfie, six, and is expecting a baby girl – her second child with husband Tom

Last month, Catherine – who is already mum to son Alfie, six – revealed she has been experiencing searing pain in her crotch since being pregnant with her second child.

The former Coronation Street actress compared the extreme discomfort to being stabbed by knitting needles.

She told her Instagram followers: ‘My baby does not like the climb in oestrogen levels. I wish I wasn’t so bloody sensitive. I’m all over the place which as a very organized Virgo is driving me insane.’ 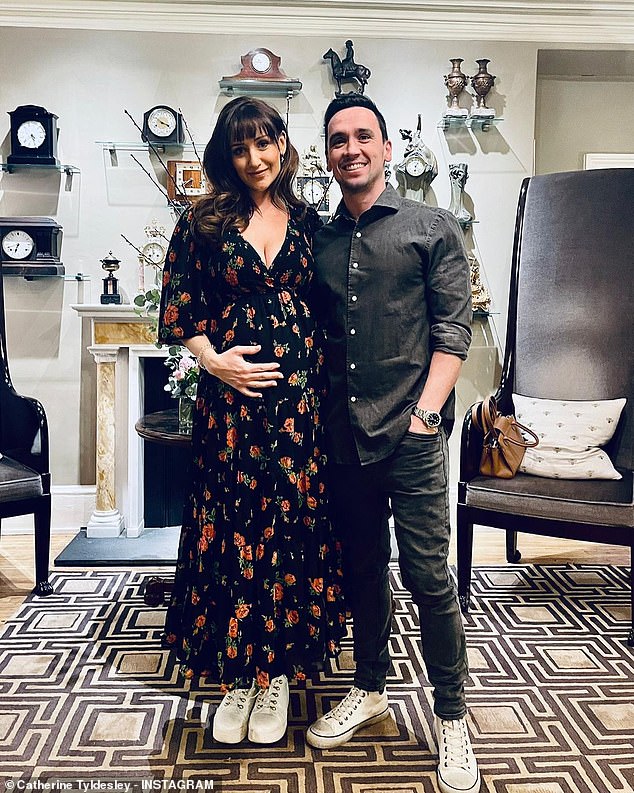