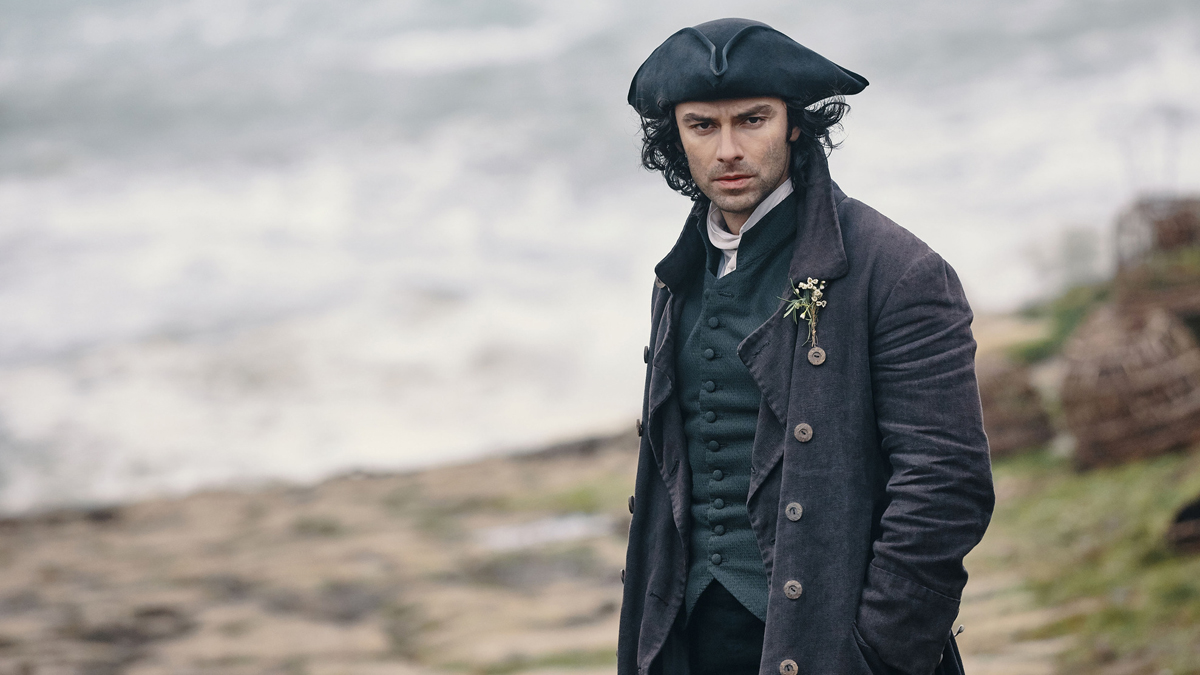 “I swear to you my love, I will return,” said Ross before walking away in slow-motion, coat tails swishing around his hero’s buttocks. He wasn’t talking to Demelza of course, but to us – the legion of viewers for whom Poldark has been our annual summer holiday for the past four years. (‘Enchanting Cornwall – soak up the sun-drenched romance of the Cornish coast. Discover majestic mines, glittering pilchards and pointy hats on this eight-episode break, £pp. ATOL protected’.) In a few years he’ll be back, they all will, older but probably not wiser.

Wisdom has never been Ross’ strong suit, nor of late, this show’s. While the finale righted a few recent wrongs and dialled back the hyperactive pace, it still landed on the dippy end of the silliness scale – somewhere between ‘high-heeled wellies’ and ‘dogs wearing backpacks’.

Making Ross swordfight the French Lord Flashheart (‘Weuf!’) didn’t help in the seriousness stakes. Nor did Ross’ entire undercover scheme, which involved the very first human-wiretap operation (wires having yet to be invented, Dwight hid under the carpet and took notes with a pencil) and Frenchies getting trapped underground by Zacky Morris’ fireworks. It was a rollicking and diverting plot, but also a cruel one.

The victim – Frenchies aside – was Demelza, whose happiness was sacrificed for the greater good. Ross conjured up a secret plan so exclusive that he divulged it only to Dr Dwight, Geoffrey-Charles, Zacky Morris, Caroline Enys, Drake, Sam, Morwenna Carne and Garrick the everlasting dog. Everyone who wasn’t Demelza, in short, knew about the mission. Even George Warleggan and the Malevolence Brothers discovered it before Mistress Poldark, who was led to believe that her man had betrayed her for human mosquito Tess Tregeddin.

It was, at least, entirely in character for Ross to think he was protecting his family by royally winding up Demelza and almost dying. He’s been pulling that shiz for years. The consistency of his prongdom though, didn’t make it any less frustrating to watch. Alluding to Elizabeth and Hugh in that marital-honesty-and-pork-pie conversation was a particularly heartless move. At that point, I was all for Demelza packing the kids, the dog, her best rolling pin and a barrelful of sunscreen and hightailing it to Jamaica to live in a feminist commune with Kitty and Cecily.

She didn’t, of course, because these characters don’t really belong to this show; they’re Winston Graham’s. This finale honoured that by defrosting the Enys marriage with a couple of genuinely touching scenes – one in which Caroline asked to hold Morwenna and Drake’s new baby, and another in which both admitted their fear of loving and losing another child. Beautifully done.

Similarly moving was George and Ross’… if not rapprochement, then cessation of hostilities. Wile E. Coyote and Road Runner drinking a brandy by the fire – who’d a thunk it? George finding his mettle and standing up to Hanson at last was a low-key triumph, as were the final scenes shared by Aidan Turner and Jack Farthing. Whenever Farthing is given more to do than sneer and rage, he makes it compelling. George’s subdued notice-giving scene at Nampara, having realised that his son will never be his own if he stays in Trenwith (“I want to learn about copper!” said no child ever) was a satisfying pay-off to the most enduring relationship on this show. A nod and an exit. Goodbye George.

Others were given faster, happier endings. The baddie brothers were arrested in their nighties (by the OG Cap’n Ross, Robin Ellis back again as Rev. Halse!). G-C is going back to school. Rosina married Sam (and thus volunteered for a lifetime of retrieving her husband’s investments in pyramid schemes). The Poldarks do expect another child, and Drake and Morwenna’s firstborn made an early appearance in their hovel. Loveday Carne – ‘tis a good job Drake didn’t take off his hat and greet his daughter with the words ‘What a stink! What a mess!”

In the end then, despite five series of people telling him to have a care, Ross did no such thing. He gambled everything for God, King and country, and won. Now he’s off to France to don his adventure beanie once again, bringing Dwight along so that he’ll have somebody’s sensible warnings to ignore. Ross may not have learned his lesson, but this patchy series at least made some goodwill repairs.

Read Louisa’s review of the previous episode here. Read about all the new UK drama arriving this year and next here.