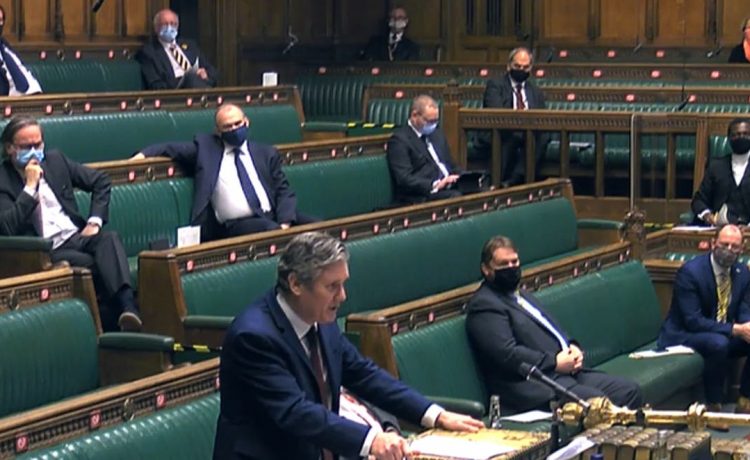 In truth it was the Prime Minister himself who was getting it “up ‘im” from some handy bayonet work by a khaki-clad Keir Starmer.

Today’s Prime Minister’s Questions felt like going back in time – and not just to Boris’s nostalgic retreat into classic episodes’ of Dad’s Army.

Someone in Labour HQ appeared to have stumbled on an old video from Tony Blair’s heyday, sometime around  1996 when he was cruising towards a landslide by pulverising the Conservatives twice a  week on their pet issues, especially Defence.

You can imagine them crowded round the TV as the old Betamax tape fires up, showing a scene of MPs screeching and baying as a fading Tory premier is gutted on “Conservative” issues.

“Gosh, could that work nowadays?” someone stammers, amazed.

So it was that Sir Keir abandoned his usual questions about Covid-19 and scrapped union-friendly script about bus driver jabs and public sector pay. Even the 1 per cent for NHS nurses got only a brief mention.

“Why did the Prime Minister promise at the last election that he would – and I quote – ‘not be cutting our armed services in any form’?”

Johnson went into evasive acrobatics that would do Top Gun proud. “That was because what we were going to do was actually increase spending,” he began, promising “no redundancies” (meaningless as the issue is strength) and claimed to be “keeping our Army at 100,000” (only if you count part-time reservists).

The PM reminded MPs that Sir Keir had backed Jeremy Corbyn who once hoped to pull out of Nato.  But Starmer was ready for him and mocked smoothly: “He’s fighting the last war.”

Starmer showed a capacity to improvise, picking up on Johnson’s bogus figures: “Is he trying to pretend, hidden in that answer, that the army stands at over 100,000 … Only this Prime Minister could suggest a reduction from 82,000 to 72,000 is somehow not a cut.”

The Prime Minister dodged around the issue before pulled the emergency cord marked “Corbyn” again, alleging that Starmer had backed a man who wanted to “disband the armed services”.

“It’s wonderful to hear the new spirit of jingo that seems to have enveloped some on the Labour benches, he went on, adding his favourite Corporal Jones refrain: “They don’t like it up ‘em, Mr Speaker.”

Again, Starmer thought on his feet. “Let’s try this for up ‘em,” he growled, and pulled out a cutting from The Sun with the headline No Troops Cuts.

“Now I know the Prime Minister has got form for making up quotes, but can he tell us – does he think the newspapers have somehow misquoted him or does he now remember making that promise?”

Starmer kept it up for another four questions, calling the PM “weak” on defence and demanding a vote. Labour’s leader was looking and sounding more confident as the exchanges went on.

Johnson connected his boot with Sir Keir’s shin several times, saying Labour could not even agree to maintain the nuclear deterrent. And you had to smile at his gloriously self-parodying boast: “We’re pro-vax, we’re low tax and when it comes to defence, we’ve got your backs.”  But the day belonged to the Labour leader.

Speaker Lindsay Hoyle stepped in curtly to pull up the PM for accusing Labour of taking part in “Kill the Bill” protests in Bristol. “Can I just say, I genuinely mean this, I do not believe any Member of Parliament would support that ‘Kill the Bill’,” said the Speaker, apparently taking the PM’s comment to mean Labour supported the murder of police officers. Which may well be what Johnson intended to imply.

No coincidence that all this focus on the military comes ahead of a by-election in Hartlepool, a Red Wall marginal that is proud of its heroes.

SNP Westminster leader Ian Blackford raised another by-election – or lack of one – accusing Scottish Tory leader Douglas Ross of being too “feart” to give up his Moray seat at Westminster when he stands for election to the Scottish parliament. Everyone yawned.

They woke up when Tory MP Philip Davies, one of those unpredictable right wingers who scare the pants off Conservative leaders, stood up with a truculent look.

“I loathe the nanny state and I believe in cutting taxes,” he said. “Prime Minister, am I still a Conservative?”

The construction of the question was all designed to warn the Prime Minister that he is falling out of step with powerful elements of his own party who want to end lockdown and let businesses create some wealth again.

Johnson replied simply: “Yes.” But it was one of those PMQs where you could see how a hair-width crack in the governing party could suddenly creak open and turn into a chasm.