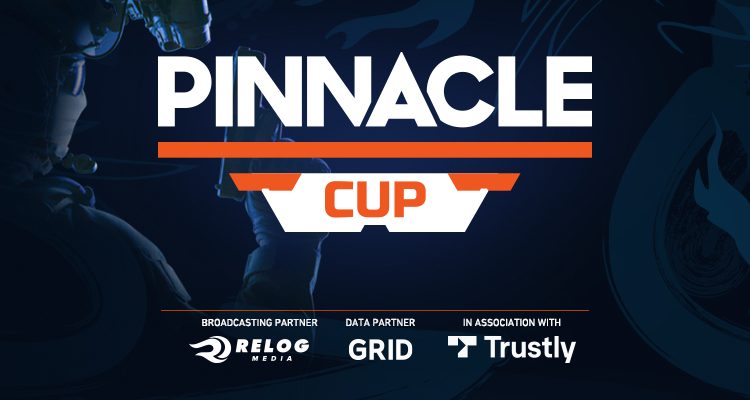 The tournament, said to feature a range of top-tier CS:GO teams, is set to take place in March, with the grand final scheduled to commence on the first weekend of April. The Pinnacle Cup victor will receive $80,000 from the prize pool with the remaining $20,000 going to second place.

Relog Media has been unveiled as the production partner for the event. In addition, Trustly will collaborate with Pinnacle to create various content pieces and interviews with players and talent to further enhance the esports fans’ experience.

Relog Media’s production service and broadcast company The Esports Bible will collaborate to air the competition on TEBTV over at Twitch. GRID has been named as the exclusive data partner of the competition in order to support The Pinnacle Cup’s broadcast experience and fan-facing content with its data solutions.

Ben Cove, Pinnacle’s CMO, commented: “This is something the team have worked incredibly hard on for a while now, and it’s fantastic to be able to announce that The Pinnacle Cup has come to fruition. We hope it can be the start of something special. At Pinnacle we truly have esports in our DNA, so while we’re intent on making this a commercial success for the organisation, we are also proud to continue blazing the trail for esports betting.

“We know Pinnacle delivers the best esports odds, now we want to show that we can contribute to exceptional events that create mass appeal – resonating with a wide global audience, from those who are new to the scene, through to the hard-core esports community.”

The competition is split into three stages — group stage, swiss stage and play-offs — with teams such as GamerLegion, Winstrike and Nemiga, already announced.

In total, the group stage will feature 16 teams with the top four competitors joining 12 invited organisations in the swiss stage. Some of the invited teams already announced for this stage include GODSENT, Nemiga, Winstrike and HAVU.

Following the swiss stage, four more invited organisations will compete in the 8-team play-off stage to crown the inaugural Pinnacle Cup champions. Fun Plus Phoenix has been announced as the first invited play-off team.

Cove added: “We’ve worked hard to establish our reputation within esports over the past decade, and it’s great to be a part of a pioneering concept that really pushes boundaries. Everyone at Pinnacle is looking forward to working alongside GRID, Relog Media, and Trustly to ensure together we showcase the very best of CS:GO.”

Esports Insider says: The Pinnacle Cup, in partnership with Trustly and Relog Media, provides additional European CS:GO content to fans in the regions, which can only be seen as a benefit. Moreover, the competition will offer a hefty reward to the teams that make it to the Grand Final, which should provide an added incentive for organisations.