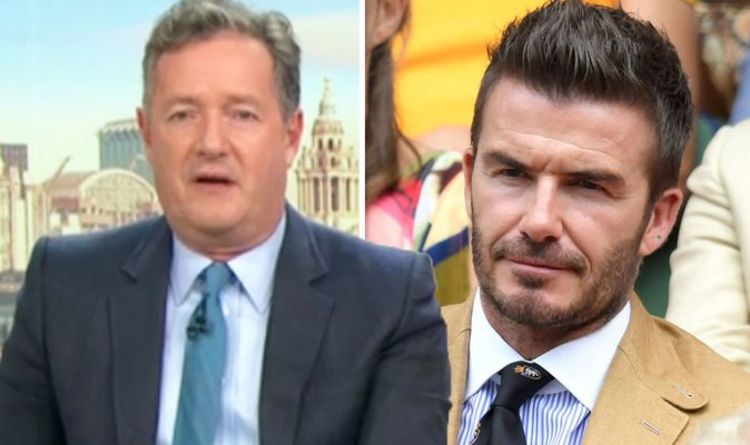 Piers Morgan, 54, has been making the most out of the rest of his summer break from Good Morning Britain, soaking up the sun in the south of France.

The presenter has been sharing many holiday snaps, making his Twitter and Instagram followers green with envy.

In one recent upload, Piers could be seen wearing a pair of black shades whilst smoking a cigar.

He wrote next to the snap: “Cohiba time! #LaGuerite.”

Sam Billings, who plays for Kent County Cricket Club, responded to his holiday photo from restaurant, La Guerite in Cannes, France, and said he was in that exact location the day before.

The sports star shared a photo of himself in the eatery, alongside David Beckham, who is on holiday there with his wife Victoria Beckham and their children.

The cricketer captioned the smiley selfie with the former England footballer: “What a spot! Was there yday and bumped into this bloke…”(sic)

Piers wrote back, saying he would have been happier to bump into Sam, instead of David.

In a swipe at the ex Manchester United star, Piers added: “I was more impressed that Beckham met Billings.”

David has been sharing photos of himself in the south of France, where he enjoyed a boat trip with his wife Victoria and their friends, Sir Elton John and his husband David Furnish.

The father-of-four looked delighted to be in their company, as he beamed away in a group shot.

David wrote beside a snap of himself and the Candle in the Wind hitmaker: “Gorgeous day with @eltonjohn @davidfurnish. 24 years we have known each other and we laugh like it’s day one.”

Meanwhile, Piers said he “doesn’t want to go back to work” as he shared a video of his lavish surroundings on Instagram.

The Life Stories’ host also posted a picture of his extravagant breakfast from a yacht.

“For all missing me on TV, apparently with increasing levels of desperation, I will eventually come back to work,” he wrote.

Piers has been soaking up the sun with his three sons, Spencer, 26, Stanley, 22, and Bertie, 18, who he shares with his ex-wife Marion Shalloe.

The controversial host spent quality time on a yacht with three of his four children.

After his divorce from Marion in 2008, Piers went on to marry Celia Walden in 2010 and they have a daughter Elise, seven, together.

Good Morning Britain airs weekdays on ITV from 6am.