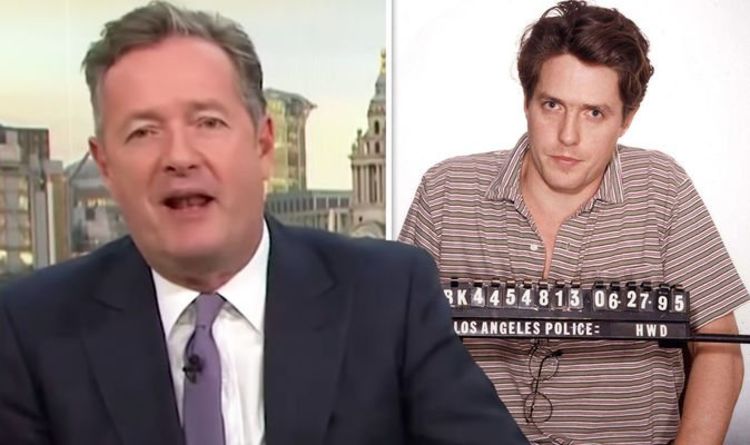 Piers Morgan, 54, took aim at Hugh Grant, 58, by mocking his “moral standards” in view of his 6.8 million Twitter followers yesterday. Piers uploaded Grant’s 1995 mug shot, which was taken after he was arrested for receiving oral sex in a public space from a prostitute in Los Angeles. At the time, the Notting Hill actor pleaded no contest to charges that he had participated in a “lewd act” and sentenced to a $1,000 fine. In a statement, issued following his arrest, he called his actions “insane”, adding: “I have hurt people I love and embarrassed people I work with. For both things I am more sorry than I can every possibly say.” Implying Grant shouldn’t be viewed as a “moral standard-bearer” due to his past, Morgan shared the mug shot on Twitter today, saying: “Halo Hugh… Britain’s moral standard-bearer.”

When one Twitter user called Morgan’s move a “cheap shot” and proposed the GMB star “wouldn’t have the courage” to say the same to Grant’s face, he replied: “I would LOVE to say it to his face, the sanctimonious hypocritical little berk.”

Last year, Grant reflected on the incident, which occurred prior to the release of his 1995 film Nine Months, in an interview with PEOPLE, saying: “There were very talented people who made that film and really brilliant actors. Only one booby who let them down, and that was me.

“Not only was I terrible in the film, but I then chose to get arrested in Hollywood a week before the film came out.

On a roll, Piers continued tweeting about the contentious subject this morning, telling his followers, and everyone watching his Twitter feed: “REMINDER: Both Labour and the Conservatives pledged to honour the Brexit referendum result in their manifestos at the subsequent election.

Once again turning his sharp tongue on celebrities criticising Boris Johnson, 55, and Brexit, he later tweeted: “What this Brexit situation definitely needs though is more woefully ill-informed Remain-voting celebrities screaming ever more hysterically about stuff they don’t understand because they didn’t get what they wanted in the Referendum.”

Yesterday, Grant was among those speaking out against Johnson’s request to suspend Parliament for five weeks, which was approved by the Queen, 93.

He slammed the Prime Minister in view of his 408,000 Twitter followers, saying: “You will not f**k with my children’s future.

“You will not destroy the freedoms my grandfather fought two world wars to defend.

“F**k off you over-promoted rubber bath toy,” he added.

“Britain is revolted by you and you(sic) little gang of masturbatory prefects.”

The news of Parliament’s suspension has caused a huge backlash, sparking protests across the country and a petition against it, which has garnered over a million signatures.

The government has said the suspension, which will end by October 14, will still allow time for MPs to debate Brexit.

John Bercow, 56, House of Commons Speaker, however, called the decision a “constitutional outrage”.

“However it is dressed up, it is blindingly obvious that the purpose of [suspending Parliament] now would be to stop [MPs] debating Brexit and performing its duty in shaping a course for the country,” he said.

Labour leader Jeremy Corbyn, 70, has accused Johnson of trying to “force through a no-deal”.

In a video shared by Johnson with his 967,000 Twitter followers, the Prime Minister said: “We’re not going to wait until October the 31st before getting on with our plans to take this country forward.

“This is a new government with a very exciting agenda to make our streets safer, it’s very important we bring violent crime down,” he continued.

“We need to invest in our fantastic NHS, we need to level up education funding across the country.

“We need to invest in the infrastructure that’s going take this country forwards for decades,” he continued.

“And we need to deal with the cost of living, moving to a high wage, high productivity economy, which I think is what this country needs to be,” he said.

“To do that, we need new legislation. We’ve got to be bringing forward new and important bills and that’s why we are going to have a Queen’s speech and we’re going to do it on October 14th,” he concluded.