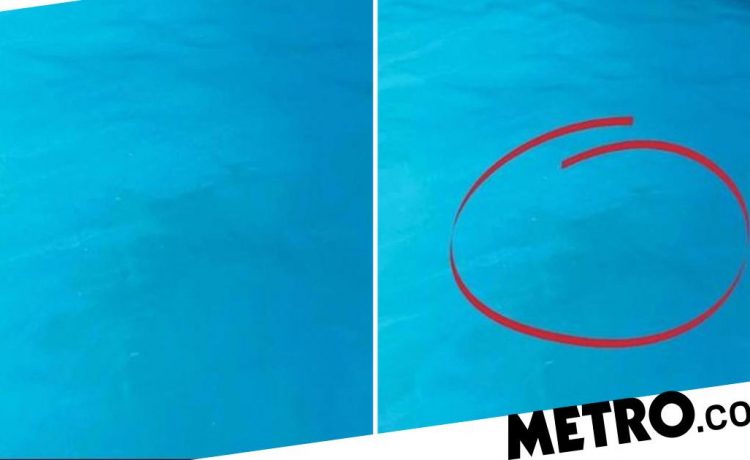 While picking up some new swimwear might not be top of your list right now, hopefully we’ll be enjoying summer holidays again soon.

And when you’re choosing something for kids to wear in the pool, it’s worth baring in mind what colour you pick.

A photo is being shared online showing how difficult it is to spot a child if they’re wearing blue, compared to other colours.

It means that if they get into difficult, you might not notice fast enough.

The image was posted by Australian Facebook group CPR Kids, run by expert paediatric nurses, in a bid to warn parents about how dangerous it is.

It shows a pool, which looks empty at first but another image circles where a child is.

The post said: ‘Yes, there is a child there, it’s hard to believe we know.

‘Following on from out post recently on the importance of fluoro (sic) and bright coloured swimwear for kids, one of the CPR Kids Educators was at a pool party with friends and noticed how cloudy the water had become after being used all day.

‘She asked one of the children who was wearing a pale blue swimsuit, to swim to the bottom.

‘The result shocked her, as it did everyone in the CPR Kids team.’

Parents posting on the page were shocked and said they would take the message on board.

One said: ‘That is so scary! I couldn’t see the child at all.’

Some said the image must have been edited because they couldn’t see anything at all but those behind the page reassured them it was not.

They said: ‘We can assure you the image has not been edited in any way – this is why the person who captured it thought to in the first place, as they couldn’t believe how hard it was to see their little one at the bottom.’

And one parent shared their own horrific experience of this problem.

Their comment said: ‘This is 100% correct! I thought I was carefully watching my 3 kids. My son had a bright blue Speedo sun shirt on that I didn’t think anything of. He stepped backwards off the step and went under.

‘Originally I thought he was under for only 3 secs but my cameras caught the whole thing and it was 26secs!!!! I can’t believe I was within arms reach of him and didn’t notice because of his blue swim shirt.’


MORE : Mum shares how she feeds her family of seven for just £25 a week


MORE : Mum says this 50p Boots dummy lets you give babies medicine with no fuss

READ  I was a victim of fraud and online bank Monzo was no help
Share on FacebookShare on TwitterShare on PinterestShare on Reddit
newsgrooveFebruary 3, 2021