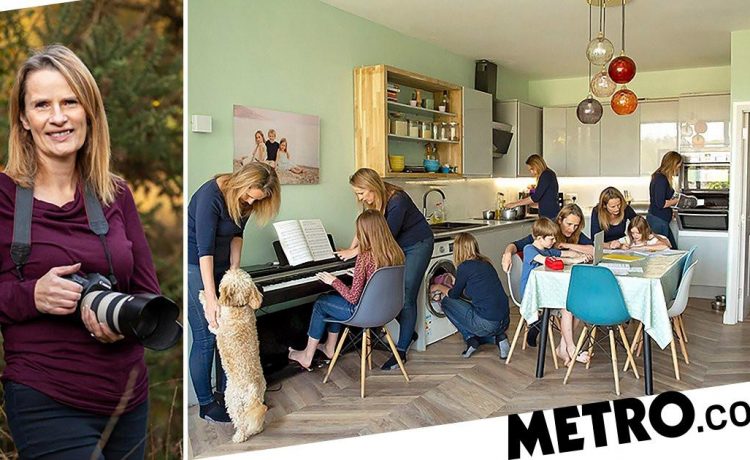 A working mum has been putting her skills as a professional photographer to good use, to capture family life during the pandemic.

Fiona Kidd created a brilliant photo of herself performing eight different lockdown scenarios at once – illustrating how full-on parenting has been during the past year.

In the single image, Fiona can be seen teaching the piano, helping with schoolwork, doing the laundry, cooking, fussing the dog and having a glass of wine – all in one frame.

The photo, which was staged at her home in Winchester, aims to convey how most parents have been feeling – and the snap has definitely struck a chord.

The 49-year-old said: ‘I did it just as a bit of fun to show friends how all of us parents were probably feeling.

‘But it got talked about by other photographers and then re-posted and shared in so many groups.

‘There were a lot of comments like, “I know what you mean” and “tell us about it.”

‘When the schools closed, like for many parents, it was stressful and tough enough just running a home, with all the washing and cooking, and home-schooling three kids (with different needs and lessons and strengths and weaknesses), without working, too.

‘I think that’s why my photograph went viral – as so many people related to it.’

Fiona is best-known for her engaging children and family portraits, but – due to restrictions – the pandemic has limited Fiona’s work.

The mum-of-three adds: ‘Pandemic rules have been something of a nightmare for my line of work and I’ve had to stay on top of all the minute detail of each rule change to see what I am allowed to do.

‘But by adapting what I do to stay within the various restrictions, I’ve managed to keep working somehow through a lot of the lockdown scenarios and changing restrictions.’

However, Fiona’s multigenerational photos have been impossible due to the risk to the elderly.

She says: ‘There are a lot of waiting grandparents out there.

‘I’m going to start photographing them with grandchildren hopefully from mid-May when the next easing of restrictions should come in, and they should have have had vaccinations.’

Fiona was also forced to adapt to outdoor photoshoots to ensure families wouldn’t miss out on capturing special moments.

She said: ‘Obviously, most of my photography has had to be done outdoors.

‘Golden wedding anniversaries and milestone birthdays either couldn’t happen at all, or if they did they were within bubbles and the rule of six applied, so it could only be done with small groups outdoors.

‘And because group photos of different generations within extended families had to stop, my work has become more focused on just parents and babies, or even just the babies – who are often left with me to work with.’

Social distancing has also meant that many clients are photographed standing apart – so Fiona has had to learn some nifty Photoshop tricks to make them look closer together.

She adds: ‘If they’re distanced I can cut out gaps. I can also use computer tools to include each child when they were looking their best out of different shots.

‘Then I combine the best of each into one final image in the original setting – although I do my best to only do that if I absolutely have to.’


MORE : New London photography exhibition documents what it’s like to be homeless during the pandemic


MORE : Romanian rescue dogs now get to travel Europe in a campervan with photographer owner

READ  Capricorns are the most confident in bed, Cancers have the most sex while Aries last the longest – but it’s bad news if you’re a Taurus
Share on FacebookShare on TwitterShare on PinterestShare on Reddit
newsgrooveMay 5, 2021