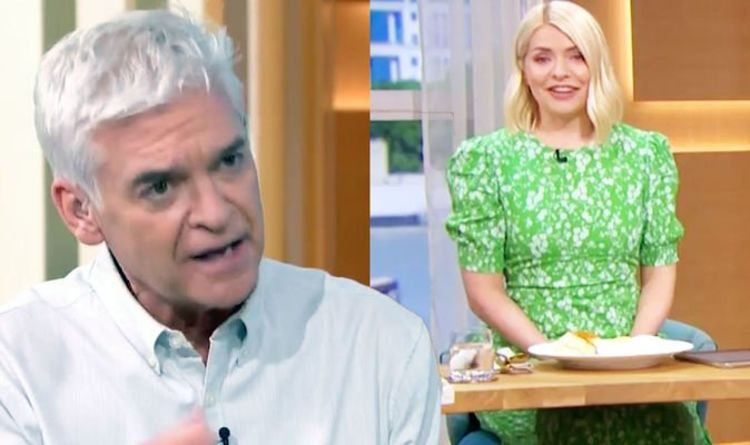 Phillip Schofield, 58, and Holly Willoughby, 40, clashed as things got tense over scones on This Morning today. The mum-of-three was left irritated by her co-host as she didn’t like the way he was cutting his traditional afternoon treat.

Phil responded “shut your face” to Holly, while preparing to scoff the dessert, as they discussed the latest royal headlines in a suitably British way.

The pair had been debating comments made by Prince Harry on Monday’s show with journalist Camilla Tominey and author Giles Brandreth.

Despite the divisive topic, the presenters found time to enjoy a quick tea break, but Holly was left far from impressed.

During the next segment, she expressed her dismay at the way Phil was cutting his scone and questioned his actions.

READ MORE:‘ He has to be careful’ Prince Harry warned by Lorraine Kelly

Camilla had questioned why someone who wants to have boundaries when it comes to his personal life continues to speak out.

“I thought he was very eloquent when he spoke about mental health.”

The presenter also said he thought “there’s a lot that’s very unfair” over the backlash the Duke has received over comments he made on the American constitution and Prince Charles.

Phil went on: “There are times when some of the things he says are unwise, you don’t want to upset your grandmother because she has just buried her husband.

“But you can’t talk about mental health without talking about your own background.”

Camilla explained she thinks Harry is “perfectly entitled” to talk about his life and be “very candid about his mental health”.

However, she did not think it was wise to make comments about the Queen or to speak out of turn when it comes to the Royal Family.