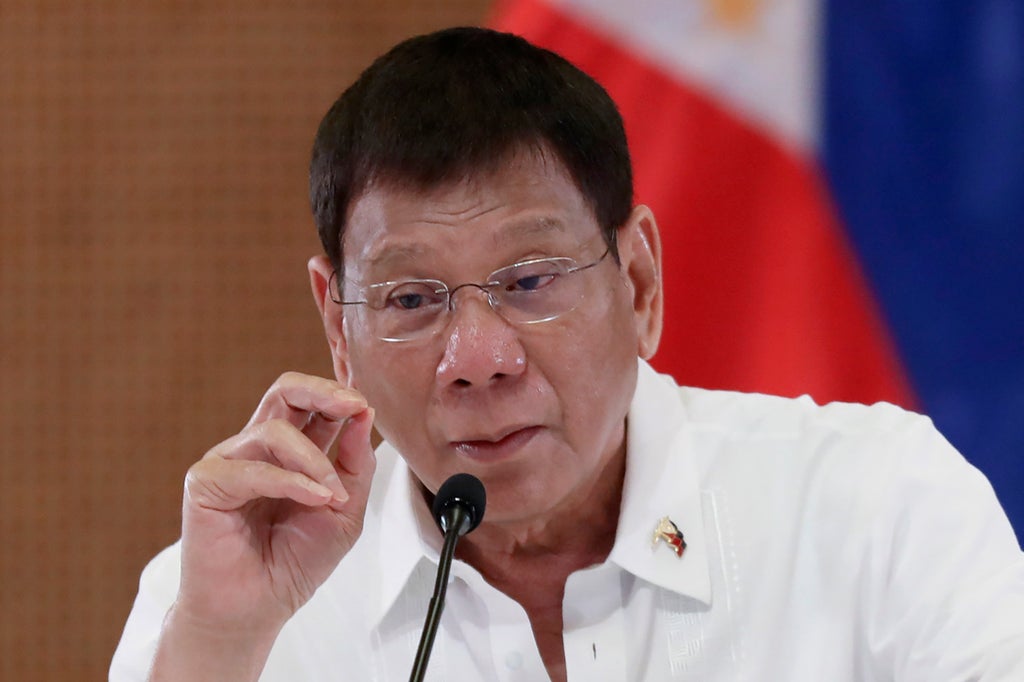 The president of the Philippines Rodrigo Duterte has announced he is retiring from politics and abandoning plans to run for vice president next year when his term ends.

Mr Duterte told reporters on Saturday his decision came in response to public opposition to his bid from Filipinos who deemed his run to be vice president unconstitutional.

Philippine presidents are limited by the constitution to a single six-year term, and opponents have said they would challenge the legality of Mr Duterte’s attempt to serve as deputy to his successor if he pursued it.

Mr Duterte had previously accepted the ruling party’s nomination for him to seek the vice presidency in the 9 May elections. Two other ex-presidents in recent history have run for lower elected positions and won after their terms ended, however none have run for the position of vice president, which could have seen Mr Duterte elevated back to the presidency if the elected leader died or was incapacitated for any reason.

“The overwhelming sentiment of the Filipino is that I’m not qualified, and it would be a violation of the constitution,” Mr Duterte said. “I will follow what you wish, and today I announce my retirement from politics.”

He announced his retirement while accompanying his aide Senator Bong Go, who registered his vice presidential candidacy instead under the ruling party.

Mr Duterte, who is known for his extreme tough-on-crime approach, could face lawsuits arising from his violent anti-criminality campaign should he leave politics.

He took office in 2016 and immediately launched a crackdown on illegal drugs that has left more than 6,000 mostly petty suspects dead and alarmed western governments and human rights groups.

The International Criminal Court has launched an investigation of the killings, but he has vowed never to cooperate with the inquiry and allow ICC investigators into the country.

His withdrawal could pave the way for the presidential run of his daughter Sara Duterte.

Ms Duterte, who is currently the mayor of southern Davao city, announced that she would not run for president while her father was running for vice presidency and has since filed her papers for reelection in Davao city.

She has topped independent public opinion surveys on who should lead the country next.