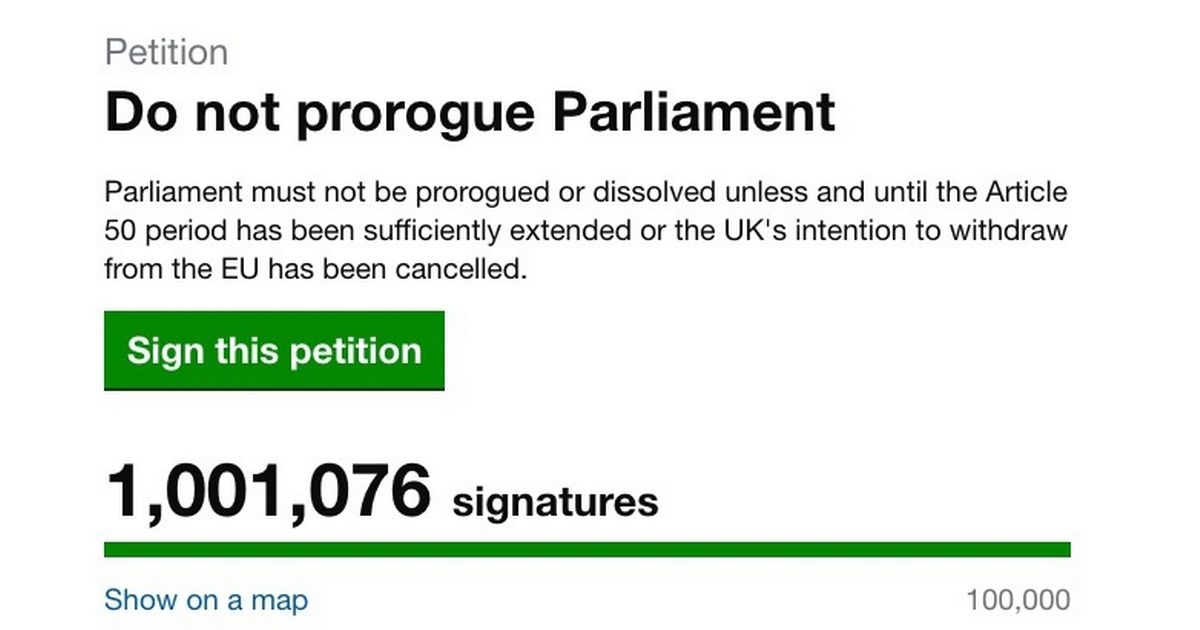 The petition was signed by almost 90,000 people in just one hour after Boris Johnson announced plans to set out his domestic agenda – making it more difficult for MPs to block plans for a no-deal  Brexit .

Labour leader Jeremy Corbyn branded the PM’s move “an outrage and a threat to our democracy”.

Miller, who in 2017 successfully challenged the government over its authority to leave the EU without a vote in parliament, said she would seek an urgent judicial review before Sept. 9, the earliest date that a suspension of parliament could come into effect.

Earlier on Wednesday, Johnson launched his boldest move yet to take the country out of the European Union by Oct. 31 with or
without a divorce deal, by setting a new date for a state opening of parliament.

Known as the Queen’s Speech, the formal event will be held on Oct. 14 and be preceded by a suspension of the House of
Commons, meaning parliament will not sit between mid-September and mid-October.

The move, which Queen Elizabeth was obliged by constitutional convention to approve, limits the time opponentshave to derail a disorderly Brexit.

Miller said in a statement.”The basis of my approach to the courts is that it cannot be legitimate or a proper use of the prerogative power to prorogue Parliament when the intention and effect inherent in doing so is to frustrate Parliament and fetter it from exercising its sovereign right to fulfil its elective role and enact any law it sees fit.”

Corbyn has written to The Queen after Boris Johnson’s scheme to hamper MP’s plans to block a no-deal Brexit was revealed.

Earlier today the Prime Minister announced he would suspend Parliament from the start of September ahead of a Queen’s Speech on October 15.

The Labour leader branded the the PM’s move a “an outrage and a threat to our democracy” before writing a letter to Her Majesty expressing his concerns about the plan.

It is understood he has requested a meeting with The Queen alongside other Privy Council members.

Labour leader Jeremy Corbyn accused Boris Johnson of a “smash-and-grab on our democracy”.

He said in a statement: “I am appalled at the recklessness of Johnson’s government, which talks about sovereignty and yet is seeking to suspend parliament to avoid scrutiny of its plans for a reckless No Deal Brexit .

“This is an outrage and a threat to our democracy.”

The House of Commons is currently expected to resume sitting after its summer break on September 3 and Labour leader Jeremy Corbyn and other opposition leaders have agreed to seek legislative changes to prevent a no-deal Brexit.

The Prime Minister has said he will suspend Parliament from around September 11 until the Queen’s Speech – a process known as prorogation.

Scottish First Minister Nicola Sturgeon said: “So it seems that Boris Johnson may actually be about to shut down Parliament to force through a no-deal Brexit.

“Unless MPs come together to stop him next week, today will go down in history as a dark one indeed for UK democracy.”

In response to the reports of a parliamentary suspension, Tory Party chairman James Cleverley said: “Or to put is another way: Government to hold a Queen’s Speech, just as all new governments do.”