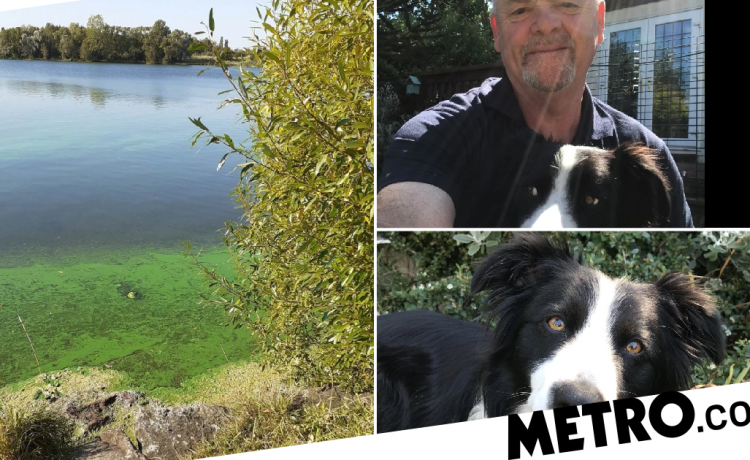 When walking your dog – especially when the weather is warm – it’s understandable to allow them to take a dip in ponds and shallow waters.

But it’s not just safety around bodies of water you should be mindful of, as vets have warned about the prevalence of blue-green algae – which can be fatal to dogs if ingested.

This comes off the back of the British Veterinary Association (BVA) warning that hot weather conditions have led to concerns about an increase in toxic blue-green algae in locations across the UK.

Border Collie Tala nearly lost her life after swimming in a pond, with the four-year-old left critically ill by the lethal blue green algae in the water.

Owner Russell Moody feared he’d said his final farewell to his beloved pet. But the desperately ill dog, just moments from death, was miraculously brought back to life by a team or vets and nurses at Vets Now in Lincoln.

Russell had taken Tala and sister Harli for a walk on farmland near their rural home in Dunham-on-Trent, Nottinghamshire, when disaster struck in early summer last year.

‘There’s a beck and a pond and they were playing happily in and around the water for about an hour,’ said greenkeeper Russell, 56.

‘I noticed Tala squinting and then she started staggering as if her balance had gone. It was such a shock and when I got her home and she couldn’t get out of the car, I really started to panic.

‘I called my vet and, as it was the evening, I was referred to Vets Now and was told to bring her straight in. By the time I went back to the car she was running at the mouth and she was totally unresponsive.

‘It was a real emergency run to get help just as quickly as I could.’

Last year’s Covid-19 restrictions meant Russell had to wait in the car while the staff assessed the situation.

‘She was in a very bad way,’ said veterinary nurse Alana Taylor.

‘She wasn’t responding to stimulation and her pupils were dilated. We did a radiograph to check her chest was clear as it was thought she may have inhaled water, but we suspected it was blue green algae toxicity due to the quick onset of signs.’

It blooms on the surface and is highly toxic to dogs, commonly causing vomiting, diarrhoea, seizures, breathing difficulties and coma.

It can lead to liver damage and death.

Tala was given an injection to make her sick and bring up the algae and was put on oxygen and intravenous fluids. But with her condition critical, it looked like staff may have to make the toughest decision.

‘She was close to having to be put to sleep when, somehow, she suddenly turned a corner,’ said Alana.

‘Her demeanour changed after about three hours and she became aware of her surroundings and wagged her tail when we spoke to her.’

One of the country’s leading emergency vets, Dr Laura Playforth, professional standards director at Vets Now, said: ‘If you suspect your dog has been exposed to blue green algae, contact your vet straight away or, out of hours, your nearest pet emergency clinic or 24/7 hospital.

‘There is no antidote for the toxins produced by blue green algae so early, aggressive veterinary treatment is essential for the best chance of success.’

Russell hadn’t been aware of the algae dangers in the water and is also warning other owners to be on the lookout.

‘I’d definitely advise people to keep their eyes on their dog at all times when near water and take bottled water rather than let them drink from a stagnant pond,’ he said.

‘And don’t delay if you see any signs. If I hadn’t had the car with me, it could all have been over by the time I got her home. We were really lucky.’


MORE : These are the most and least affordable areas for first-time buyers to get a home


MORE : What is reality shifting, and does the TikTok trend work?