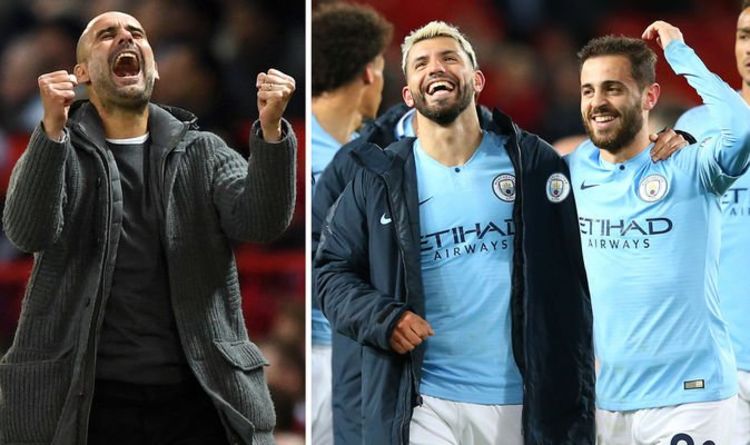 An ultimately comfortable victory against Manchester United in the derby at Old Trafford with goals from Bernardo Silva and Leroy Sane, put City a point clear with just three games to go.

City have to face Burnley on Sunday, followed by Leicester City and Brighton.

But the City boss called for his players to block out all the noise of the title run-in in order not to lose the advantage they have fought so hard for.

“We go to Burnley and we know how tough it will be. It’s important to be calm. We are still not champions with three games left – it’s incredible with the points we have and Liverpool have.

“I told the players don’t read tomorrow, don’t watch the television, just rest and sleep a lot and go in there against Burnley.

“Both teams deserve the title. But it can be just one. It is in our hands but the team that is going to lose can’t have regrets because they have given everything.

“Normally with this kind of victory you can it enjoy it the most but we have to be calm.”

While City re-established their lead at the top of the table with three matches to play, United still remain in contention for a Champions League spot.

Despite this reverse they trail Chelsea in fourth by three points and Arsenal in fifth by two points with Maurizio Sarri’s side visiting Old Trafford on Sunday.

Striker Marcus Rashford insisted United had to forget about the pressure of qualifying for the Champions League and instead took aim at the collective display.

“Today we didn’t play like Manchester United [and] it’s not right. The bare minimum is to work hard and give all for the badge, the supporters, the club and yourself,” he said.

“It has been a tough road to get to where we are, to get there and not be putting up the same performances as we were in January is disappointing.

“We know what’s been going wrong, it’s mentality and willingness to run for your team.

“Forget the league and top four, you don’t lose this game. It’s that simple as a Manchester United fan. We never call each other out but we have to be real with each other. It’s a matter of trying to improve each other.”

He added: “It’s more getting back used to doing it on the pitch. They [the supporters] know we can do it. Forget the top four and the Champions League. We have to get to the bottom of it and start playing like Manchester United for ourselves.”