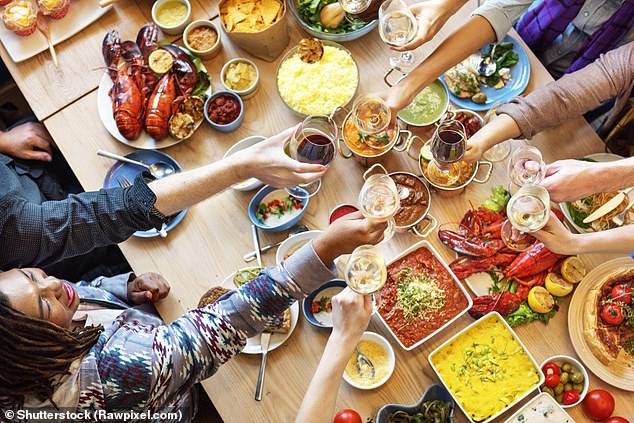 By Sam Blanchard For Mailonline

People eat more when they’re with family or friends and it could be a habit inherited from ancient ancestors.

A study has found being part of a group has a ‘powerful’ effect on how much food you eat.

Food consumption can go up by almost 50 per cent compared to when people dine alone, possibly because of a hunter-gatherer food sharing mentality.

Tens of thousands of years ago, groups of people would gather to eat as much as they could and distribute the food while it was plentiful.

This would protect them against periods when there wasn’t enough food to go around, researchers from the University of Birmingham suggested.

Other possible, more modern reasons for eating more while in company, included that people might want to project different images of themselves to different people.

And social eating was found to be more enjoyable than eating alone, suggesting the brain’s reward centre encourages people to do it more.

One reason for people eating more when they were in groups was that it is seen as more socially acceptable to gorge oneself than when they’re alone, scientists said (stock image)

Psychologist Dr Helen Ruddock said: ‘We found strong evidence that people eat more food when dining with friends and family than when alone.

‘However, this social facilitation effect on eating was not observed across studies which had looked at food intake amongst people who were not well acquainted.

‘People want to convey positive impressions to strangers. Selecting small portions may provide a means of doing so and this may be why the social facilitation of eating is less pronounced amongst groups of strangers.

‘Findings from previous research suggest that we often choose what (and how much) to eat based on the type of impression that we want to convey about ourselves.

‘Evidence suggests that this may be particularly pronounced for women eating with men they wish to impress and for people with obesity who wish to avoid being judged for overeating.’ 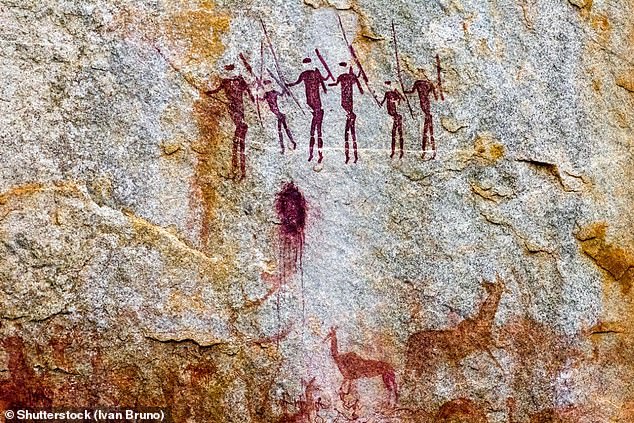 People in ancient civilisations, the University of Birmingham researchers said, would share food while it was plentiful in a bid to avoid going hungry when they ran low (stock image)

Dr Ruddock and her colleagues analysed 42 other studies which had looked at the effects of socialising while eating.

They found people tended to eat 48 per cent more when they were with people they liked. This effect was slightly lower for obese women, who ate 29 per cent more.

When people were with strangers or those they didn’t like, however, the effect was not the same.

And humans aren’t alone in their tendency to gobble more when in groups.

READ  Call for schools to open in the summer after lockdown

The same trait has been seen in animals including rats, chickens, gerbils and other species.

This suggested, the researchers said, that it serves a purpose beyond simple vanity.

Because food gathering is essentially a competition in the wild, those who hoard it for themselves could fall out of favour with the rest of the group, so it could be a way of keeping tensions low.

Dr Ruddock added: ‘A solution to this tension may be to eat at least as much as others in the group.

‘Individual members match their behaviour to others, promoting a larger meal than might otherwise be eaten in the absence of this social competition.

‘What we describe as “social facilitation” can be seen as a natural by-product of social food sharing – a strategy that would have served a critical function in our ancestral environments.

‘This also explains why it is more likely to occur in groups with individuals who are familiar with each other.’

And in people, social norms might play a part, too.

It may be seen as more acceptable for people to gorge themselves in a social situation than when they’re at home alone, the scientists said.