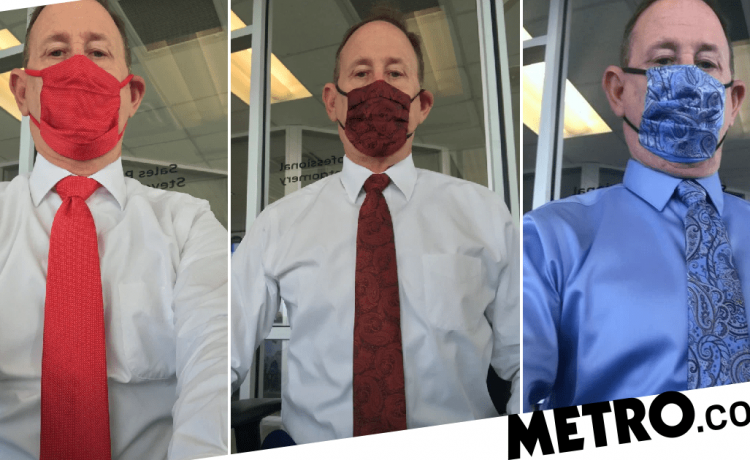 In seriously dad news, a man has been embarrassing his daughter with his matching tie and face mask.

A step-up from the usual dad fashion of socks and sandals, Steve Montgomery has been giving his wardrobe a pandemic spin.

The dad has been picking face masks that correspond with his ties and they’re as colourful as you’d expect.

Though social media users are loving Steve’s sartorial choices, his daughter Kiana isn’t quite so impressed.

After tweeting images of his latest looks, captioned ‘dad, why?’, Kiana went viral.

It seems the dad, from San Antiono, Texas, is notorious for his matching skills.

So it only made sense that his face coverings were going to be complimenting the rest of his wardrobe.

So far, he’s rocked some geometric prints, a floral number and other colourful designs.

And people can’t get enough.

Kiana’s tweet has amassed more than 600,000 likes, with people appreciating the dad’s fashion.

After being told he went viral for his savvy fashion choices, Steve had the most dad answer, asking what viral means.

And if you’re wondering how he managed to get so many different masks that match his ties, don’t worry, there wasn’t a tie and mask sale going on.

Steve actually used the pocket squares that came with his tie and transformed them into masks, though Kiana revealed it was Steve’s girlfriend who did all the work.

At the moment, Steve has 15 bright masks to choose from and his partner is in the process of making some more so Steve doesn’t waste a moment slaying.

It’s not just a tie and mask ensemble Steve is rocking either, he has also been known to sport matching shirts with the get-up.

The viral tweet showed that it’s not just Steve using the pandemic to up their fashion game.

Plenty of other dads have been incorporating their style into the face covering it seems.

Other Twitter users replied to the viral thread sharing pictures of their dads and partners showing off the matching looks.

Is your dad up to the same antics?

Email metrolifestyleteam@metro.co.uk if you have a story you want to share.

READ  Motherbrain: How AI is helping this VC firm to pick the next big start-up
Share on FacebookShare on TwitterShare on PinterestShare on Reddit
newsgrooveJuly 26, 2020