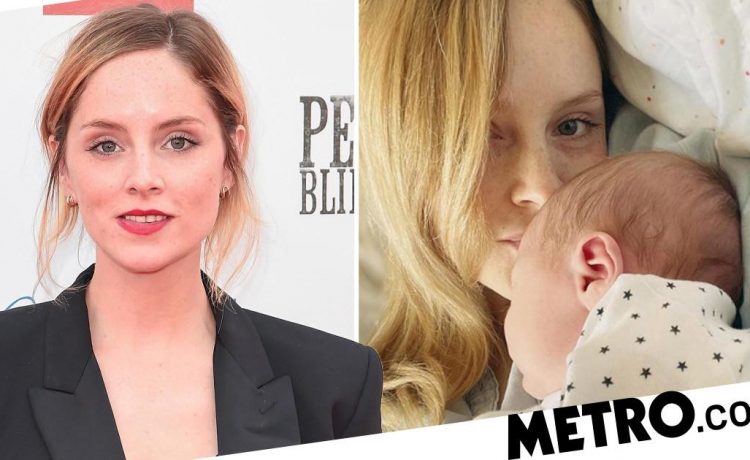 Sophie Rundle has given birth to her first child with fiancé Matt Stokoe.

The star could be seen relaxing with her newborn son as she lightly kissed him on the head.

She captioned the image: ‘Our little boy, who arrived safely and happily over the Easter weekend and changed the game forever.

Sophie confirmed she was expecting in February this year and shared some pictures of herself cradling her baby bump online.

She told fans she was expecting the new arrival this spring.

The star, who fell ill with coronavirus at the end of last year, wrote: ‘New friend on the way. Arriving here with the daffodils and the sunnier days of spring. High riser, my little loaf.’

Sophie and her fiancé Matt have been together since 2016 after they met on the set of Jamestown, where she played Alice Kett and he starred as James Read.

The couple announced their engagement in May 2019 when Sophie let slip in an interview that Matt – who also starred alongside her in Bodyguard and was cast in The Musketeers and Cursed – had popped the question.

She revealed at the time: ‘We got engaged a couple of weeks ago. The whole wedding thing is weird, though.

‘Everyone expects you to be desperate to be a princess for the day – that’s not really my scene.’

The pair were rumoured to have had a secret marriage during lockdown but Sophie is keeping things quiet if they did.

When asked if there’d been a wedding, she told Metro: ‘Goodness, people are fascinating but strange! No, I don’t have anything to say on that.’


MORE : Jedward award themselves ‘Bafta for best drama’ after calling out The X Factor


MORE : Katie Price says she hides cosmetic surgeries from mum Amy until after she’s had them

READ  Dan Walker: BBC Breakfast host hits out after being called 'shameless' for home life query
Share on FacebookShare on TwitterShare on PinterestShare on Reddit
newsgrooveApril 11, 2021