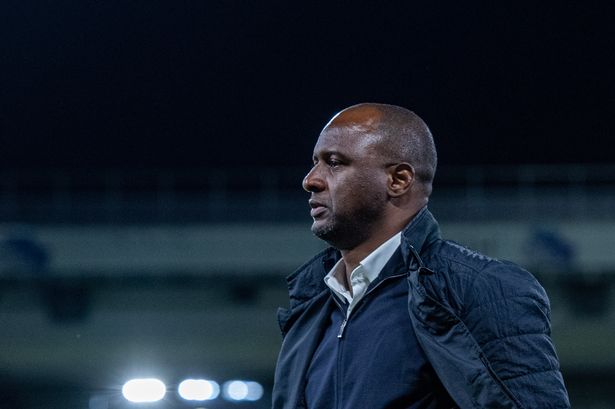 Everyone remembers the player Patrick Vieira was when he was at his peak during his eight years at Arsenal. But as he has recently discovered, reaching a similar level as a manager may prove more difficult.

A towering, imperious presence in the midfield areas, Vieira was seen as the vital component in Arsenal’s engine room. He was the one that made the rest of the team look good.

It was those gliding runs through the middle, carrying the ball past his opponents with an effortless stride forward. The very sight of Vieira charging towards them would make them cower in fear.

His managerial counterpart Mikel Arteta came up against Vieira on a number of occasions during his days at Everton. And the Spaniard, perhaps unsurprisingly, was glowing in his praise for his Frenchman.

“He was very dominant,” Arteta said about his Palace counterpart.

“He was physically really gifted, technically too, he had the right temper, he was brave and he could score goals. He could do a bit of everything and he was remarkable.

“He is an Arsenal legend and I hope he gets the reception he deserves for what he did for the club, not only as a player but also what he transmitted as a person.

“He was a captain of the club in the most successful era in the last many years and it is great to have him back.”

The Frenchman has worked tirelessly to get his opportunity in the Premier League at Crystal Palace after being hired on a three-year deal this summer. But if things had gone differently, he may have been preparing the club where he made his name.

Having coached Manchester City ’s academy side, he then went on to manage the organisation’s MLS satellite club, New York City FC between 2016 and 2018.

There has been some criticism of how managers such as Ole Gunnar Solskjaer, Frank Lampard and the current Arsenal boss, Mikel Arteta, have waltzed into top jobs due to their connections as a player. A form of nepotism.

But Vieira has earned his stripes, learning his trade in America before trying his hand in his native France with OGC Nice in 2018. Managing a team firmly embedded in the top eight of Ligue 1 with a few brief forays in Europe with a small budget demonstrated the challenges.

Even when Vieira had put together a decent side, the club was forced to sell players to balance the books, as is standard procedure when you are not one of the top 20 clubs in Europe.

Building the blocks up again, on a limited budget, can be a tough assignment. And sure enough, after his brand of football was criticised by the fans, the two parties agreed to part ways.

Will Mikel Arteta see out the season as Arsenal manager? Comment below.

The timing could not have been simply a coincidence. Vieira had been linked with the Arsenal job

For at that point, Arsenal were struggling to stay afloat on the back of their worst-ever start to a Premier League season. The Gunners were hovering dangerously above the relegation zone and the calls for Arteta to go were intensifying.

Somehow, the Spaniard clung on and the north London side found their rhythm again, eventually finishing in eighth for the second consecutive season. If there was a chance for Vieira to replace him, it had since passed.

So he waited for the next opportunity to come along and finally, it arrived. Crystal Palace had been mulling over who would succeed their legendary boss Roy Hodgson following his retirement. Nuno Espirito Santo changed his mind and went to Tottenham, while Lucien Favre made a last-gasp decision to snub the role.

Eventually, it became clear that Vieira would be the man to take the job on.

Awaiting him at Selhurst Park was an ageing squad with 11 key squad members out of contract and a limited budget to replace them with. No manager would envy that particular situation, but the Frenchman got to work.

He had only signed Marc Guehi from Chelsea for £18m when he took on the Blues in the opening match of the season. Under a more experienced, stronger side who were comfortable in their setup, Chelsea cruised to a 3-0 success. Vieira was not about to panic, insisting there would be more new faces arriving.

The club completed a loan deal for Conor Gallagher, also from Chelsea, and snatched Odsonne Edouard from Celtic in a bargain £15m deal. The arrival of exciting youngster Michael Olise from Reading would prove to be another shrewd capture from the Eagles.

Vieira made clear he would be attempting to bring a blueprint for his style of football to south London. He had bought the players to do so, and combined with Wilfried Zaha, they could begin to entertain their loyal fans at Selhurst Park.

At last, it felt as if Palace were building towards an identity, rather than just surviving in the top flight. The fans had appreciated Hodgson’s work as much as they could, but also recognised the belief it was time for a change in direction.

It took a few unspectacular results to get going, with a goalless draw against Brentford and a narrow defeat to Watford in the Carabao Cup. But against Tottenham, his side came to life. Even before Japhet Tanganga’s red card, they were dominating the game and put Spurs to the sword with three late goals — Edouard grabbing a brace on his debut from the bench.

They took more points away in a London derby, equalising in the dying embers of the game against West Ham. That one finished 2-2.

A 3-0 defeat against Liverpool showed there was work ahead of Vieira, but the way his side peppered goal in their next game against Brighton — only to concede a late equaliser in a 1-1 draw — would have been simultaneously frustrating and pleasing.

Crystal Palace are starting to develop a taste for free-flowing, attacking football

They also recovered from two goals down to draw against Leicester City, having dominated the game. Two individual mistakes highlighted the work ahead of Vieira and his coaching team, but their dominance in possession is becoming clearer with every game.

There is a general sense of optimism from the fans about the football being played and, providing results hold up, that will only boost the support for Vieira in the boardroom.

On the other side of London, there are cautious hope emanating from corners of the Emirates Stadium after Arsenal’s recent upturn in form. But there are still some doubts over Arteta’s suitability for the long-term, and whether his style of play stays true to the iconic football Arsene Wenger built his reputation on.

That has led Vieira’s name to be mentioned in that same conversation about Arteta’s replacement once again, but the French boss has reaffirmed his commitment to the Palace project.

“I want to grow with a football club,” he said.

“This football club is really ambitious, as I am as a manager. Both of us can achieve good things here. I’m really enjoying working with the players, the staff, with [all] the people who are working at the football club.

“The club wants to be bigger, they want to challenge for bigger things, and that will take time, obviously. But we are in the process of developing something really interesting.”

If it doesn’t work out, Vieira could be the next man on their list — and the Frenchman will be eager to show his former club why they may regret not hiring him when they had the chance on Monday night.