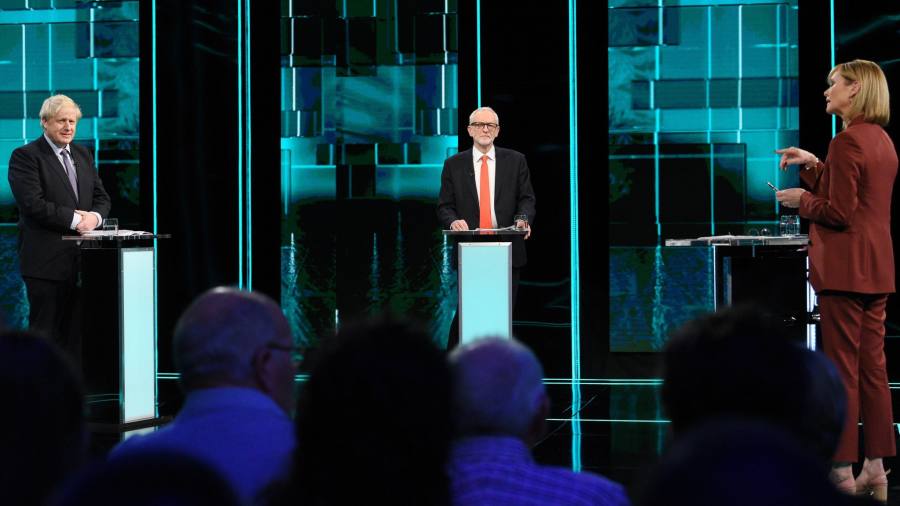 Boris Johnson on Tuesday night survived a high-stakes televised duel with Jeremy Corbyn, with a snap opinion poll suggesting that he had narrowly beaten his Labour opponent in the most dramatic encounter in the election campaign to date.

Mr Corbyn, desperately needing to gain political momentum, put in a solid performance and scored some points against the prime minister, but the hour-long televised debate did not give him the breakthrough he sought.

A YouGov survey of more than 1,000 viewers of the ITV debate found that 51 per cent thought that Mr Johnson, who focused relentlessly on Brexit, had put in the best performance, with 49 per cent saying Mr Corbyn had won the contest.

“Corbyn needed a game changer and didn’t get one,” said one ally of Mr Johnson, who admitted that the prime minister was taking a risk as the frontrunner in the election in going head to head with Mr Corbyn, his principal rival.

With little more than three weeks until polling day on December 12, YouGov’s national survey puts the Tories on 42 per cent, Labour on 30 and the Liberal Democrats on 15. Such a vote share on election night would give Mr Johnson a Commons majority.

Mr Johnson went on the attack on Brexit in the first half of the debate, repeatedly criticising Mr Corbyn’s “absurd” refusal to say whether he would campaign for Leave or Remain in the second EU referendum he has promised.

The prime minister claimed that the Labour strategy would condemn the country to further uncertainty, but Mr Corbyn insisted he could get “Brexit sorted” in nine months: three months for Labour to negotiate an improved exit deal and six months to put it to a referendum against a Remain option.

Mr Johnson refused to contemplate Britain failing to secure an EU trade deal by December 2020, prompting the ITV moderator Julie Etchingham to ask whether he was confident enough of meeting the deadline to “mint a new coin” for the occasion.

Meanwhile, Mr Corbyn also came under pressure to rule out a deal with the SNP in a hung parliament, with Mr Johnson claiming that a Labour government would preside over a second independence referendum next year.

The Labour leader refused to rule out a second Scottish referendum but said it would not take place in “the first years of a Labour government”.

Mr Johnson claimed that if Mr Corbyn could not commit to how he would campaign in a second EU referendum or rule out another Scottish referendum he was “not fit to run the country”.

But the prime minister’s repeated attacks on Brexit began to wear thin with the studio audience and he was greeted with laughter when he said that truth mattered in general elections. He had moments earlier claimed that his EU trade deal would not put a trade border in the Irish Sea.

Predictably, Mr Corbyn had a stronger second half of the debate, as questions turned to non-Brexit issues including the NHS.

In one powerful moment, the Labour leader spoke of a friend who had died of secondary breast cancer and had failed to receive swift care in her last days because NHS nurses were overwhelmed. He said his friend had made a video appeal pleading with politicians to address the problem.

Mr Corbyn also pressed home his allegation that Mr Johnson would put the health service on the table in a future trade deal with the US: “You’re going to sell our NHS to the United States and big pharma.” Mr Johnson insisted that the claim was “totally untrue”.

The studio audience format laid bare some of the candidates’ weak spots. While Mr Johnson’s commitment to telling the truth drew laughter, so too did Mr Corbyn’s promise to tackle “the scourge of anti-Semitism” and his defence of Labour’s plan for a four-day week.

Mr Corbyn promised to rebuild the economy so that it no longer created “a society of billionaires and the very poor — neither of which is right”, claiming that Labour would end nine years of austerity.

Meanwhile, Mr Johnson said Tory economic management would allow investment in vital infrastructure. He claimed the Labour leader had found not a money tree but “a money forest” and would bankrupt the country.

Five of the Best: Cheat Codes