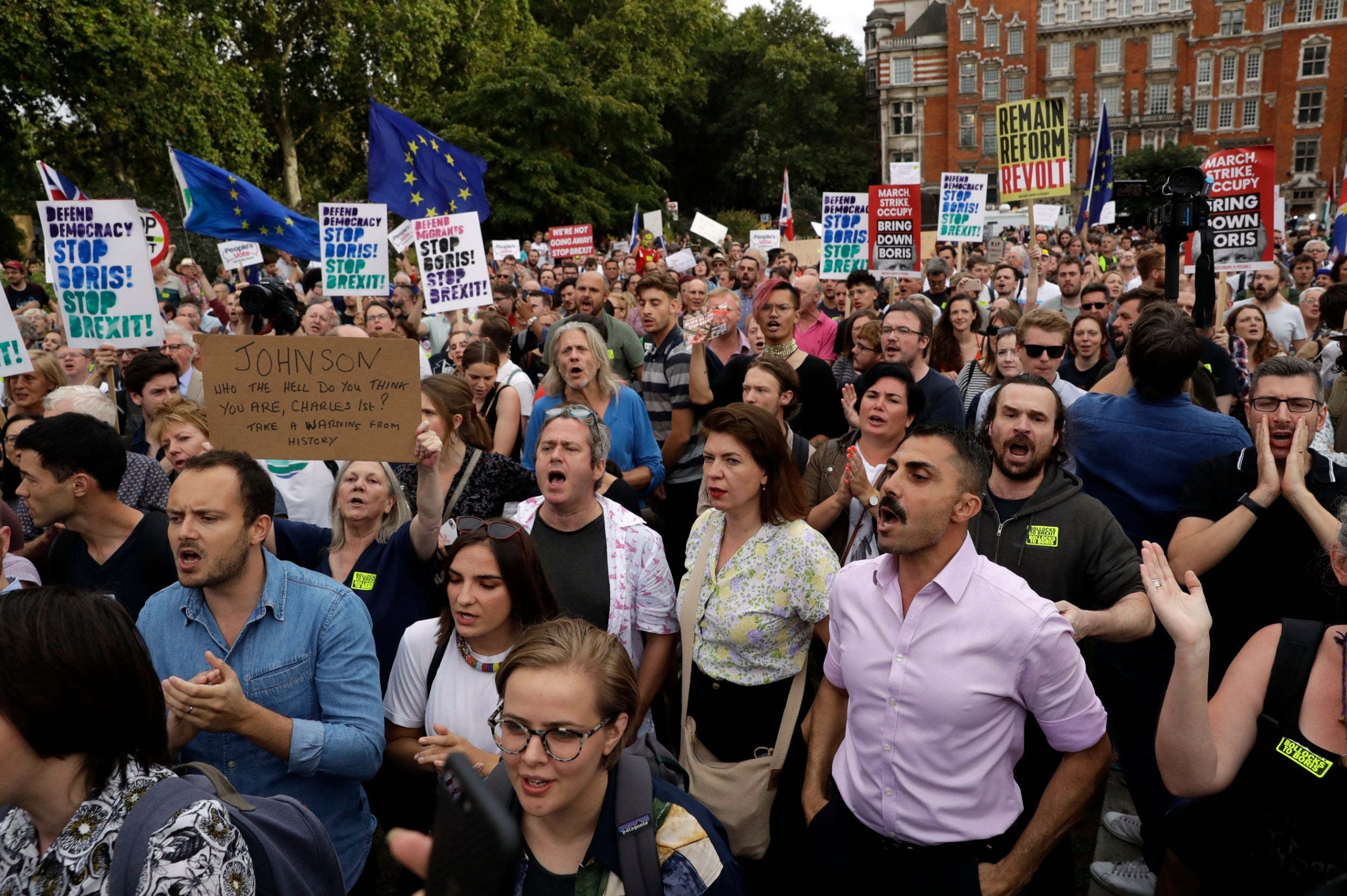 Organisers are hoping “hundreds of thousands” of people will take part in disruptive protests across Britain this weekend in response to the Prime Minister’s plan to prorogue Parliament.

Anti-Brexit campaign group Another Europe Is Possible has organised 32 #StopTheCoup demonstrations to take place in England, Scotland and Wales on Saturday.

Meanwhile, left-wing group Momentum is calling on its members to “occupy bridges and blockade roads” in conjunction with the protests.

Michael Chessum, national organiser for Another Europe Is Possible, told the PA news agency that “disruption is the only form of leverage protesters can rely on”.

He said the group is not encouraging demonstrators to block roads, but that kind of disruption is “certainly possible”.

He added: “We would go further than anticipate (civil disobedience). We would defend it.”

Labour leader Jeremy Corbyn has urged MPs to join the demonstrations and oppose the shutdown of Parliament.

In a letter to the Parliamentary Labour Party, he said: “I am addressing a major rally in Salford on Monday. But there are also public protests across the country this Saturday, there will be a rally in Parliament Square on Tuesday evening, and I encourage Labour MPs to be present and to share our message.”

The shadow treasury minister said: “The right to peacefully protest and show your displeasure and anger is a long-held British tradition.

“No one is calling for riots or aggravation. This is about people peacefully demonstrating.

“A peaceful protest can be marching, but it can also be sitting down in roads.”

The calls for protests come as a petition against Prime Minister Boris Johnson’s plan to suspend Parliament racked up more than 1.5 million signatures as of Friday morning.

It also follows multiple protests in London, Edinburgh and other cities on Wednesday, which took place within hours of Mr Johnson announcing his plans.

Mr Chessum said he expects to see “hundreds of thousands” of people taking part in the demonstrations across the UK on Saturday, with the protest in London being the largest.

He said: “Ultimately we are not going to persuade Boris Johnson to change his mind through some intellectual exercise.

“This process needs to force the Government to change its course.”

The main London protest is due to take place outside Downing Street from midday on Saturday.

In a statement, the foundation said: “People have an absolute right to protest, whether in Parliament, on demonstrations or in the media.

“We believe strongly in freedom of speech. But we would urge everybody to avoid saying or doing anything that could incite or lead to violence.”

Islington North MP Mr Corbyn said in a letter to the Parliamentary Labour Party that “no-one voted for Boris Johnson’s shutdown of democracy”.

He said: “That is why the public outrage at his actions has been so deafening, and why I am encouraging MPs to join public protests opposing this shutdown and the Prime Minister’s threat of a no-deal Brexit.”

According to the Mirror, Laura Parker, Momentum’s national co-ordinator, said she would join an occupation of Parliament as the group stepped up its campaign.


It quoted her as saying: “Our message to Johnson is this: if you steal our democracy, we’ll shut down the streets.

“There are thousands of us who will join an occupation of Parliament and block the roads before we let Johnson close the doors on democracy.”