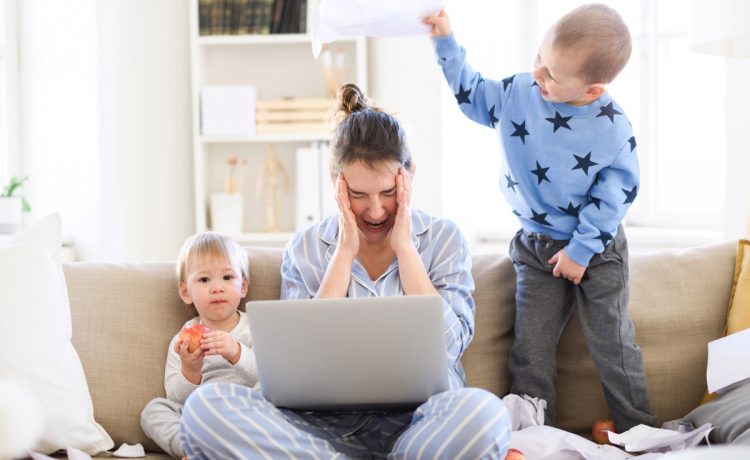 PARENTS are taking on more than 20 different roles a day, as they juggle being a teacher, friend and doctor.

With the UK now a year into the pandemic, which has seen numerous lockdowns imposed, a study of 2,000 parents showed they went from having 14 ‘jobs’ to 21.

After schools closed, being a teacher is the most common role mums and dads have had to assume, with 72 per cent becoming professors to their kids.

Nearly half of the parents asked, who all had children under the age of 18, have acted as proof-readers, while 42 per cent turned into storytellers to keep their kids entertained.

Some 33 per cent channelled their inner Joe Wicks to become PE teachers, 21 per cent got technical as social media consultants, with 15 per cent taking part in TikTok videos with their kids.

More than half, 56 per cent, got behind the camera to capture their children, while 53 per cent even tried their hands at video games.

The research, commissioned by experience provider, Buyagift, ahead of Mother’s Day, found they also took on more traditional roles, with 34 per cent referring between sibling squabbles.

Mums and dads were still the head chef in the house, with 64 per cent cooking day in day out, while 67 per cent became first-aiders, and 66 per cent were a friend to their children.

Some 35 per cent were accountants, 72 per cent did the job of a cleaner, 53 per cent ferried their kids around, 47 per cent claimed they acted as their kids’ PA, while 49 per cent said they were a ‘negotiator’ at times, and 51 per cent took on an event planning role.

For older kids mums and dads become their careers advisor, with 26 per cent dishing out advice, while 20 per cent gave their teens relationship counselling.

Popular culture also influenced households over lockdown, with 40 per cent dusting off an old chess board, inspired by Netflix’s The Queen’s Gambit, to play with their kids.

While just under a quarter enjoyed the challenges posed by taking on new roles, 44 per cent of parents said it left them with little time for themselves.

Pre-pandemic, parents’ to-do lists took up 16 hours and 30 minutes of their week, but during lockdown mums and dads saw this rise to more than 27 hours in total.

The study, carried out by OnePoll, found that despite 72 per cent admitting the extra responsibility has been tough, 35 per cent enjoyed the extra time with their families.

And 59 per cent were looked forward to more quality time outdoors when lockdown restrictions ease.

Alison Vickery, from Buyagift said: “The last 12 months have been a challenge for so many families and our research shows that all parents, including mums and maternal figures, have had an exceptionally busy time.

“So, to help people show their appreciation and plan a moment of magic for their loved one, we’ve curated the Mother’s Day Experience Collection- giving the nation’s top multitaskers something to look forward to when everyday life gets back on track again.

“We know there’s a multitude of people taking on the role of ‘mum’, so there’s something for everyone to enjoy, to offer a bit of a break from the daily to do list.”

In response to the findings, Buyagift has launched a new package of experiences ahead of Mother’s Day on 14th March, to celebrate the doting mothers and maternal figures who have been non-stop during the pandemic – giving them a moment of magic to look forward to when life looks a little more normal.

Buyagift will be donating 10 per cent of sales of the Afternoon Tea Gift Box Experience sold between the 1st March and 14th March to Gingerbread, a charity which supports single parent families across England and Wales.

Other experiences available include spa breaks, days out and culinary experiences – giving mums and mothering figures a moment of magic to enjoy.

March 2: When you listen to your heart you’ll know exactly what to do next

Meanwhile this cook shows exactly how she makes tasty dinners for under £1 using just Aldi ingredients.

And this glam mum-to-be applies a full face of make-up while in labour and 10cm dilated.

Plus this mum fumes after daughter’s nursery changed her name because it was ‘too hard to pronounce’.