Parasite DNA from the ‘world’s first stomach infection’ is found in 17,000-year-old faeces of a Puma that lived in the last Ice Age

The earliest ever evidence of parasitic DNA has been found inside the fossilised faeces of an ancient puma.

Droppings from 17,000 years ago featured eggs of a parasite called a coprolite, which is an intestinal parasite that today affects cats, dogs and foxes.

Microscopic eggs were identified inside the faeces of the predator which once roamed Argentina.

The oldest parasite DNA ever (right) recorded has been found in the ancient, desiccated faeces of a puma (left)

The eggs belonged to Toxascaris leonina, a species of roundworm found today in the digestive systems of cats, dogs and foxes.

It can be picked up by humans from contaminated soil. Symptoms include a rash, headaches, sore throats and diarrhoea.

Spectacular mammals prowled the pampas including the sabre-toothed cat smilodon with seven inch teeth, giant sloths and dire wolves, the largest ever canine.

There were also plant eaters like stilt legged horses and South American camelids – such as llamasa and alpacas – which the pumas may have preyed upon.

Dr Romina Petrigh, of the National University of Mar del Plata in Buenos Aires, said: ‘While we have found evidence of parasites in coprolites before, those remains were much more recent, dating back only a few thousand years.

‘The latest find shows these roundworms were infecting the fauna of South America before the arrival of the first humans in the area around 11,000 years ago.’

This would have put them in regular contact with accumulated waste and excrement, making the infections more likely.

The coprolite was dug up in a cave in the mountainous Catamarca Province on the southern Puna plateau of northern Argentina.

Remains of now extinct megafauna have previously been unearthed at the same site. 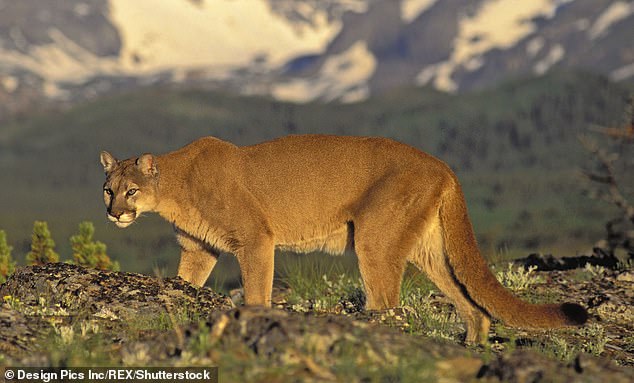 Analysis of the mitochondrial DNA in the dried out faeces confirmed it came from a species of a Puma concolor – commonly known as a cougar.

At the time – known geologically as the end of the Pleistocene – the area around the shelter called Penas de las Trampas would have been wetter than today.

This made it a suitable habitat for both the huge beasts and smaller wildlife that they hunted.

Dr Petrigh’s team analysed the ancient mitochondrial DNA in the dried out faeces analysis to confirm it came from a species of a Puma concolor – commonly known as a cougar.

The extremely dry, cold and salty conditions which took hold after the Ice Age helped reduce the breakdown of the DNA, explaining the exquisite preservation.

Dr Petrigh said: ‘I was very happy when I discovered how old this DNA was.

‘It is difficult to recover DNA of such an old age as it usually suffers damage over time.

‘Our working conditions had to be extremely controlled to avoid contamination with modern DNA, so we used special decontaminated reagents and disposable supplies.

‘Several experiments were performed to authenticate the DNA sequences obtained and the efforts of the team of researchers who participated was essential.’

The research was published in the journal Parasitology. 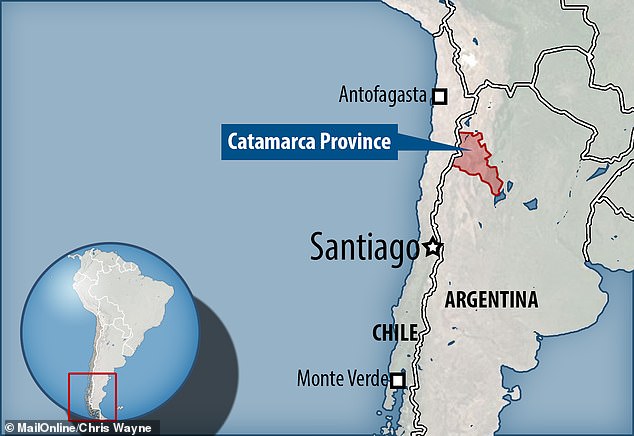 WHAT DO WE KNOW ABOUT ANCIENT MEGAFAUNA?

Earth was once inhabited by a variety of giant forms of animals that would be recognisable to us today in the smaller forms taken by their forbears.

They were very large, usually over 88 pounds(40kg) in weight and generally at least 30 per cent bigger than any of their still living relatives.

There are several theories to explain this relatively sudden extinction. The leading explanation of around was that this was due to environmental and ecological factors.

It was almost completed by the end of the last ice age. It is believed that megafauna initially came into existence in response to glacial conditions and became extinct with the onset of warmer climates.

In temperate Eurasia and North America, megafauna extinction concluded simultaneously with the replacement of the vast periglacial tundra by an immense area of forest.

Glacial species, such as mammoths and woolly rhinoceros, were replaced by animals better adapted to forests, such as elk, deer and pigs.

This all happened about 10,000 years ago, despite the fact that humans colonised North America less than 15,000 years ago and non-tropical Eurasia nearly one  million years ago.

Worldwide, there is no evidence of Indigenous peoples systematically hunting nor over-killing megafauna.

The largest regularly hunted animal was bison in North America and Eurasia, yet it survived for about 10,000 years until the early 20th century.