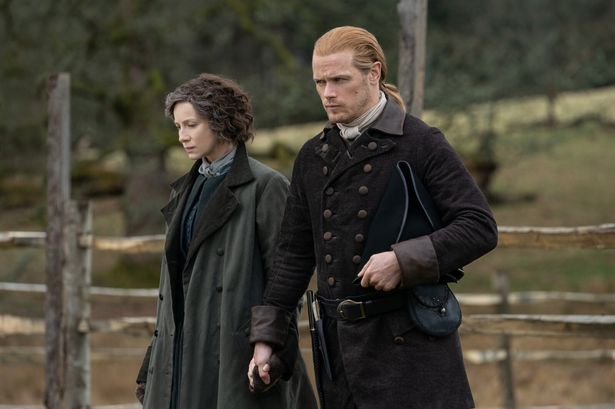 The pair often get up to hijinx together, from taking hilarious behind the scene’s pics and videos to spending the night downing whisky together.

However, there is one thing that Sam won’t share with her and that’s the secret Diana Gabaldon let him in on. The Scottish star revealed in a recent interview with Esquire, that the author, who is currently writing the last Outlander book in the series, told him what will happen at the end of the entire series.

“Diana Gabaldon actually revealed to me how the whole thing’s going to end,” he said. “She emailed me the last few pages of what will be the last book very early on, I think in the first few weeks of shooting and no one else has seen that I think, apart from one other exec producer.

He then joked that even Caitríona “hadn’t seen it”, so he was “sworn to secrecy.

However, Cait recently revealed she is happy to find out when she gets there.

But added that she does expect Jamie and Claire to “go out together”.

She added: “I think she has told Sam something about his character, but then I think he is just really nosy and he badgered her!

“I’m quite happy to let the mystery live, and just find out when I need to find out.”

How do you think it will end? Let us know on the Everything Outlander Facebook page.

Don’t miss the top culture and heritage stories from around Scotland. Sign up to our twice weekly Scotland Now newsletter here.