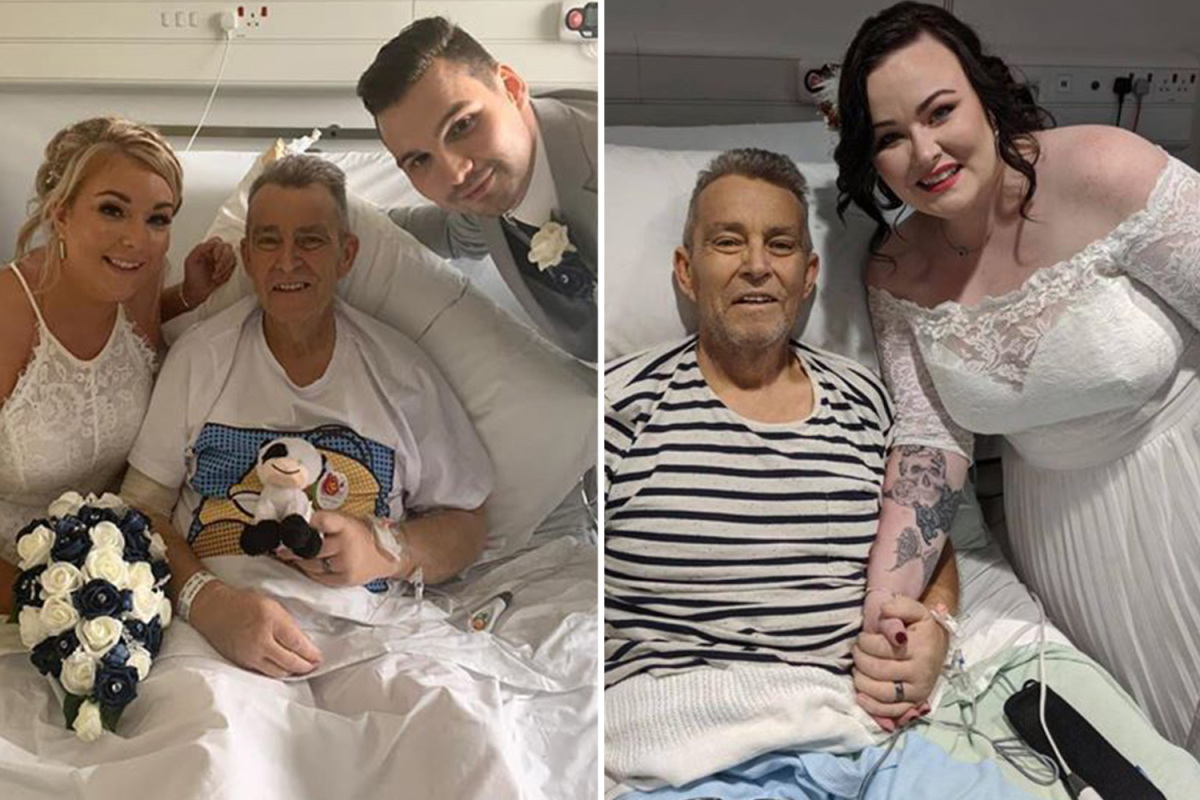 AS Lucy Kidwell watched her big sister Katie walk up the aisle she beamed with pride – just as she had done the day before.

But getting married on the same weekend wasn’t the way the pair had imagined their wedding days to go.

Tragically their dad Graeme Crook, from Lothersdale, Yorkshire, had been diagnosed with pancreatic cancer in August and given just months to live.

Both Lucy and Katie’s boyfriends knew how much it would mean to have him at their weddings and went in secret to ask for his blessing.

Incredibly, within three weeks the couples had arranged to exchange vows – one day after the other.

They had desperately hoped that their dad would be there to walk them up the aisle but sadly the 63-year-old’s condition took a turn the night before Lucy was due to marry.

But Graeme was adamant that their big days still went ahead on September 28 and 29 this year.

Instead of toasting at their reception, both girls rushed to the hospital as soon as they’d said their vows to be with him at his bedside – still wearing their wedding dress.

Speaking to The Sun Online, Lucy, 28, said: “It was bad enough that he wasn’t able to be there so this was the next best thing.

“He was over the moon. It meant the world to us that we both managed to get pictures with our dad on our wedding days.”

Graeme managed to survive the weekend of their weddings and was able to go home but sadly he died a week later on October 6 – just nine weeks after being diagnosed with cancer.

Lucy said: “The videographer was incredible and managed to get the videos to us within a few days.

“So we were able to sit and watch them with my dad.

“The smile on his face – he was so happy to see both his girls get married.

“I feel like we were lucky to be able to have that moment together.”

She added: “The day after we watched the wedding video he looked at me and said I’ve had enough now.

“I understood what he was saying.

“We were all sat by his side – even then he was still holding on – and I said to him, ‘don’t be scared dad’, and he slipped away.”

Lucy said that she knew that pancreatic cancer was a form of the disease that killed quickly – but didn’t realise how fast it would be.

She said: “I thought that the worst case scenario he might have three to six months but it was actually nine weeks in my dad’s case. It was so awful.”

Lucy explained that her dad Graeme, a patient transport driver for the Yorkshire Ambulance Service, had no idea about some of the early warning signs.

“He used to like walking and had just been a holiday to Peak District with my mum,” she said.

“He was in a bit of pain – in his back and stomach – and as he was diabetic, he went to see his GP.

“The GP recognised that it was something that needed to be looked at quite quickly.

“He was referred through the two week pathway but his pain was getting worse so he had to go to A&E where they did some scans.

“They thought he had gallstones but the scans showed nodules on his liver which turned out to be pancreatic cancer which had spread.

“It was quite a big shock to go from being OK on holiday one week to ‘you’ve got cancer’ the next – and it’s spread.

“My mum has had cancer three times so she sort of understood.

“I went onto the Pancreatic Cancer UK website to find out more because I’m one of those people that has to know what I’m dealing with.

“That’s when I read there’s a one per cent chance of survival. From that I learned it was stage four.”

She said that on August 6, Graeme was told that surgery wasn’t an option because the cancer was too advanced.

The only treatment they could offer was palliative care.

Lucy said: “He said he would try the chemo but we all made it clear to him that if he didn’t want to go through it that would be fine as well.

“I think people presume that you have to have chemo, even if it won’t save your life.

“It made us realise that actually that quality of life is so important and chemo can really affect that.

“He ended up only having two sessions of the weakest chemo because he’d just lost too much weight and they struggled to find a vein so they had to put a pick line in.

“It was just really difficult. There were a couple of times he was all geared up to have chemo and they would say they can’t do it because of one reason or another.”

Not long after he was diagnosed, Lucy’s then boyfriend Colin Kidwell and Katie’s partner Matt Bourn – who are best friends – went to see Graeme in hospital.

Lucy said: “They secretly asked for his blessing to marry his daughters.

“They said he was absolutely over the moon about it and they’d never seen him so happy about something before.”

The boys proposed on the same day with Matt taking Katie, 29, to Whitby for a romantic picnic.

While Colin, an IT architect, designed a custom game which he asked Lucy to play at home.

The 12 signs of pancreatic cancer you need to know…

Pancreatic cancer is known as the silent killer because it’s hard to diagnose early – it does not cause any signs or symptoms at the early stages.

That’s why it’s so important to be aware of the symptoms to look for as soon as they start.

The most common symptoms to look out for include:

She said: “He asked if I’d test out the first level of this new game he had designed and I was like ok.

“Then when it got to the end screen it said ‘Lucy Crook, will you marry me?’

“I turned around and he was down on one knee.”

Then ensued three weeks of wedding planning to get both of the big days schedule for the last weekend of September – the week of Graeme’s palliative chemo.

But the week before they were due to say I do, Graeme contracted sepsis and was admitted to Airedale Hospital in Keighley, West Yorks.

“The doctors were talking about ‘end of life care’ but as soon as they said that he should speak to his daughters about cancelling the weddings my dad gave the strongest ‘NO’ they’ve ever heard.

“He said, ‘those weddings are going ahead. They have to happen.’ That helped us know that we were doing the right thing and he wanted us to have good days.

“He couldn’t come to the weddings himself but he said that our mum had to go. He didn’t want her sat by his side crying. He knew she needed to be at the weddings.

“We thought it was so important that he saw us married to good men before he passed away.”

The night before Lucy’s wedding, doctors called them into the family room.

She said: “They told us we should say our goodbyes – they didn’t think he would live until the end of the weekend.

“My sister said she wasn’t sure if she could go ahead with it without our dad, but he assured us we had to.”

Lucy and Colin were married at Broughton Hall, in Skipton, and Katie and Matt got married at the Alama Inn in Laneshaw Bridge, Lancashire.

She said: “We only had 15 people at our wedding and I left an empty chair for my dad at the ceremony.

“When we watched the video a few days later I pointed it out and said ‘that was your seat’. He was delighted.

“The first thing we both did after the ceremonies was to jump in the car and go straight to the hospital to see him.

“It felt like we were in Coronation Street or something – we thought ‘how could this be happening to us?’

“In the hospital they gave him his own separate room so when we came in in our dresses and we had that private space.

“He was sat up, alert and talking – that moment, it meant so much to us.”
Lucy said their first Christmas as married couples will be tough as it’s also their first without their dad.

She said: “We used to call him ‘gadget Graeme’ because he loved getting the latest tech.

“When we were little we weren’t allowed to go and see what Santa had brought until he had put his camera on record.

“He had shelves of home videos – he was so proud of us.”

Lucy is urging others to support the charity Pancreatic Cancer UK’s campaign – Demand Survival Now – by signing a petition calling on future UK Governments to produce a national plan in response to the pancreatic cancer emergency.

Survival for pancreatic cancer hasn’t changed in 50 years – currently 93 per cent of people will die within five years of diagnosis, making pancreatic cancer eight times deadlier than other common cancers such as prostate, breast or bowel cancer.

READ  Vitamin B12 deficiency symptoms: The one sign in your eyes that could signal the condition
Share on FacebookShare on TwitterShare on PinterestShare on Reddit
newsgrooveDecember 26, 2019