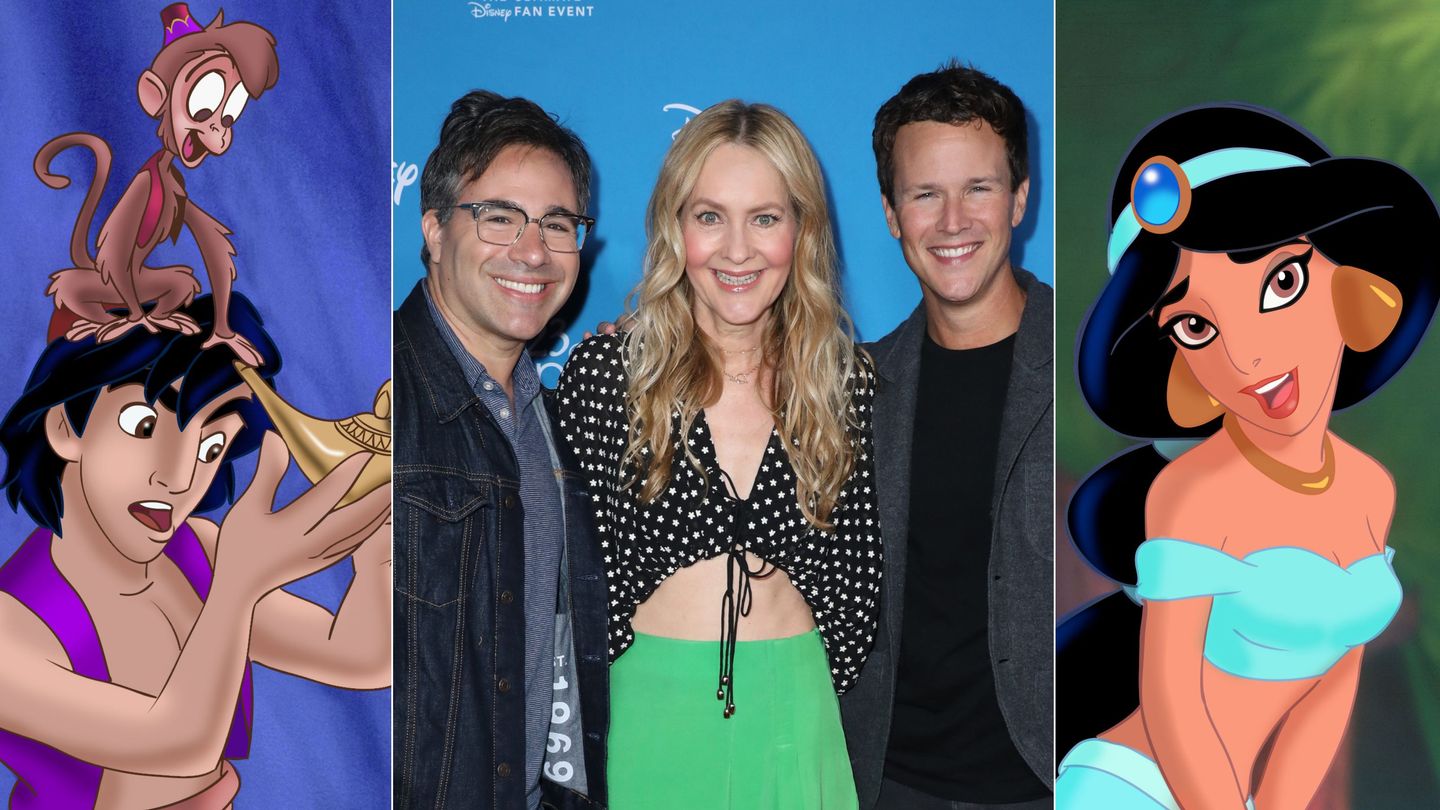 “I’m freaking out, you guys. I’m freaking out,” Scott Weinger says during a chat with Brad Kane, Linda Larkin, and MTV News. The trio — who voiced speaking Aladdin, singing Aladdin, and speaking Princess Jasmine in the 1992 animated feature, respectively — is back together at the D23 Expo in Anaheim, California, for an onstage celebration of the many years and many iterations of Aladdin that have graced screens and stages over the past 27 years. “I’ve never hosted a show before, live, thousands of people, and we didn’t rehearse the whole thing. Let’s just see what happens! You might see some crazy stuff.”

Depending on your level of fandom, the presentation did, in fact, offer some crazy stuff. The three leads recalled their months-long audition process for the movie that would go on to win two Oscars and become the highest-grossing animated film of all time (at the time). Old footage of Kane working with the film’s composer Alan Menken to perfect the syncopation of “One Jump Ahead” played, immediately followed by the vocalist proving his pipes are still in full working order. There were appearances by Clinton Greenspan just a few short weeks ahead of his Aladdin Broadway debut; Deedee Magno Hall, the first Jasmine to grace Disneyland’s Hyperion Theater in Disney’s Aladdin: A Musical Spectacular; and Mena Massoud, the newest Aladdin to join the party, who showed up with a blooper reel and a deleted scene from 2019’s live-action film.

The hour-long retrospective was a stark reminder of just how prolific this story has become. “We grew up with it, and now there’s generations of people who have grown up with this movie,” Weinger says. “There’s adults that saw it when they were kids and now they’re seeing it with their kids.”

And yet, in some ways, the animated flick’s premiere feels like it was just yesterday. “I remember it pretty vividly,” Weinger says. “I was working on Full House at the time and after work I invited Candace Cameron to be my date to the premiere. And I didn’t really explain it to her because it was pre-social media where you need stylists and 10 people to get you ready for a thing. It was just like, ‘After work you wanna go with me to see this movie?’ And we went for sushi and then we went to the premiere of the movie, and it was really fun.”

Even though this date sounds like exactly the content we’d want to revive in 2019 to remind us of times that were simpler and more pure, when two teen-dreamy co-stars and their perms could go out for a night of celebratory fun at a children’s movie, we can’t. “The crazy thing is: there are no pictures of it,” he continues. “They can’t find any pictures from the premiere of us.”

“I know!” Larkin chimes in. “I don’t even think I have any pictures. I remember I was with my parents, I remember what I was wearing, but I don’t ever remember seeing a photo.”

“That’s too bad,” Kane laments after his initial surprise dissipates.

An attempt to verify this claim (via a quick Getty Images search) revealed it to be true: The only celebrities with readily available photographs from the evening are people like Steven Spielberg, Goldie Hawn, and Sharon Stone — who are certainly all stars, but not the stars. Thus, sadly, all we have are the memories of that moment in time, so here’s what Weinger, Larkin, and Kane remember.

MTV News: Looking back on this movie, what do you feel? What comes to mind when you go back to that moment in time?

Linda Larkin: It’s been such a continuous journey for us. We’re here today with the animator who drew Jasmine, and with one of the creators and directors of the film, and with each other, and we just have been doing this for 27 years. It’s just one long continuous journey going back to 1992. To pick out one thing that we remember from the film, I would say definitely the workdays that we had, all of our work in the studio together.

Larkin: That’s so funny. It was a different time, too. You didn’t wear makeup to work then when you were recording.

Scott Weinger: Well, that’s one of the joys of doing an animated thing — you don’t have to. You can show up in your sweatpants.

Larkin: Yeah, they definitely did not tell me the day they were filming in the studio. All of a sudden there was a camera crew there. I was like, “Oh wait, I think I have lipstick somewhere. Hold on!”

Larkin: It was, right?

Kane: It was, except when we were actually in the rehearsal rooms and the cameras were there. That was for press, and I always thought, “Oh, they’re just using that to study my mouth, too.” Change my clothes!

Larkin: Oh yes, and then also those surveillance cameras that they had trained on us…

Weinger: Of course, to make sure we didn’t divulge details of the plot!

MTV News: It was a different time, and that’s what’s interesting about an animated film, is that it doesn’t have outfit choices and things like that.

Larkin: It’s so interesting, our film too though, because Robin Williams did so much improvising and a lot of pop-culture references were in our movie, and I thought that that would really pin it to 1992, and it doesn’t.

Weinger: There’s a few that sort of do, in a good way, that remind you.

Kane: But then they have Ed Sullivan, which was a 30-year-old reference even then.

Weinger: Yeah they were all — exactly. William F. Buckley…

Kane: Yeah, Groucho Marx, William F. Buckley, [laughs] I forgot about that one, that’s right. I don’t mind all of those pop-culture references. I think the idea of anything being dated — something should be of its time, to some degree, you know?

Larkin: Right, it’s of its time without being dated. That is exactly it.

Weinger: A lot of people say when they watch it, it takes them back to that exact moment in their lives.

Kane: That’s the thing, you want it to suck you right back to your childhood.

MTV News: Was there a standout moment when you realized how big this movie had become?

Larkin: Oh, I would say after the first weekend. The opening weekend box office shattered every box office record in history, and I think we had a sense of it because we’d seen it with a few audiences that flipped out for it.

Weinger: We went to these fancy screenings of it and stuff. And then the premiere, they shut down Hollywood Boulevard for this huge premiere. So, I mean we knew it was a big deal. And I remember then they said it was the highest-grossing animated movie ever. And then they said it was the highest-grossing movie of the year. I mean, it was just like a big, monster thing. It was crazy.

Kane: For me it wasn’t until really 20 years later that I realized what a big deal it was. I mean I knew it was special to be a part of, because you know you had Beauty and the Beast that came before it, and all these animated classics. It was nice to be a part of that legacy. But it’s not until many years go by that you actually see how many generations of people…

Weinger: You get perspective.

Kane: You get the perspective on it and you realize you are actually part of a classic now. It’s a pretty great thing to feel.

Weinger: All three of us get, “You were my whole childhood!”

MTV News: And to end, how did it feel to see your story being repurposed for the live-action movie?

Weinger: I loved it. In addition to the fact that the movie was great and they made it their own and Mena Massoud was good, and Naomi [Scott] was amazing, and of course, Will Smith and the whole gang, I love that it sort of brought Aladdin into the front row of pop culture again. It’s pretty insane. Because it didn’t just start a conversation about that, it brought our movie back into the conversation.

MTV News: I, personally, don’t think it ever left!

Weinger: Yeah! It brought it in more, even more. Yeah, exactly!

Larkin: I loved seeing Jasmine’s role expanded. That was, for me, so exciting in the live-action. It was really special.

This interview has been edited and condensed.