Olivia Colman has absolutely no recollection of having studied Queen Anne, the last of the House of Stuart, at school.

‘I really would have sat up and listened,’ she insisted. ‘She’s fascinating!’

She certainly is, at least as portrayed by Colman in director Yorgos Lanthimos’s brilliant Film4 gem The Favourite, which opens here on New Year’s Day, but is already generating palace-loads of Oscar and Bafta buzz.

The monarch is part of a love triangle including Sarah Churchill, Duchess of Marlborough, a childhood friend who gained undue influence over the monarch; and Abigail Masham, a lowly cousin of Churchill’s who blags a job in the court. 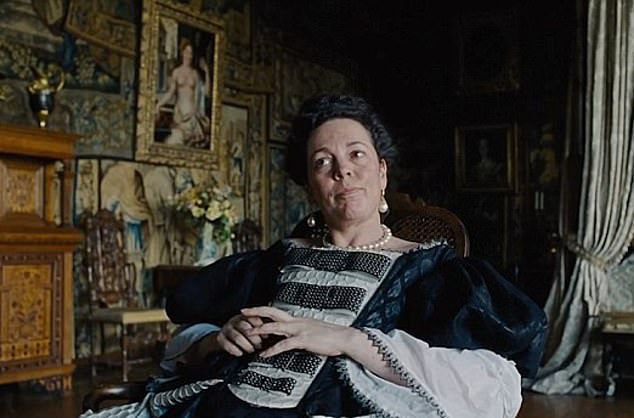 Those two women, who were to become rivals for the queen’s affections, are played, respectively, by Rachel Weisz and Emma Stone.

‘It’s supposed to be true that Anne was in love with Sarah Churchill, and they had a relationship,’ Colman told me. ‘There were letters, and there was talk at the time.’

The actress, whose diverse output includes Rev, Broadchurch and The Night Manager on TV and Murder On The Orient Express and Lobster (an early Lanthimos film) on the big screen, said everything about Queen Anne astounds her.

‘Having 17 children — and losing them all, at various stages — is just horrific. And to carry that pain, that heartache — the mental pain, and the physical pain she was in every day — is extraordinary. So, yeah, I would have remembered her if we’d done her at school.’

Anne was a hobbling health hazard. She had gout, poor vision, and spent much of her life in bed, convalescing.

‘People would make the most of her illnesses and manipulate her, I suppose to get their own needs met. And she was patronised, and spoiled.’

Imagine, she added, ‘to never know if people genuinely love you, or if they love what they can get from you’. 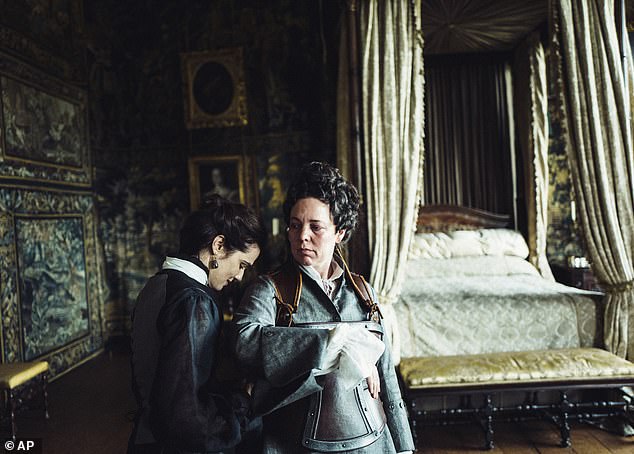 But Anne is not totally weak. Colman invests her with a streak of savviness. ‘Once she gets given the opportunity to speak, she realises: “Hang on a minute. I’m not as rubbish as I thought I was!”’

Lanthimos and the screenwriters take the facts of Anne’s reign and subvert them in the most deliciously wicked way (when she read the script, Colman said ‘Yes please!’).

‘Feminists and non-feminist will love this story,’ she told me. ‘Each of the three women has an arc that’s layered and complicated. These are ugly, beautiful women. Proper flawed humans, as all humans are.

‘Anne was plain, and I jumped at that because I want to play different people in different things.’ She wears hardly any make-up in the movie, and was happy to put on weight. Though less happy to put real beef steaks on her legs to ‘cure’ her gout. ‘Yes, it was quite unpleasant,’ she said, in a mock clipped voice that conveys exactly how pungent the pong was. 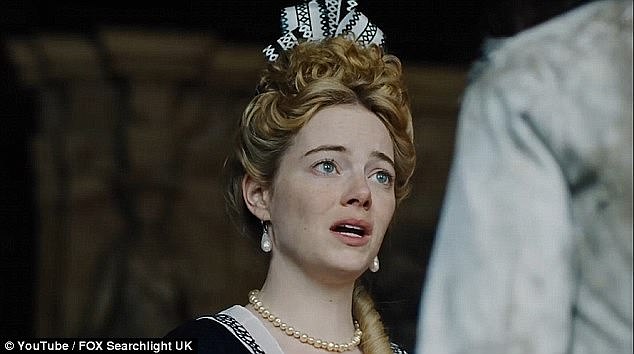 Emma Stone plays Abigail Masham, a lowly cousin of Churchill’s who blags a job in the court

The women all suffered, in varying degrees, for their art; while the male characters got to wear make-up and wigs.

Olivia laughed as she talked about Nicholas Hoult, who plays Robert Harley, First Earl of Oxford and leader of the opposition. ‘Nick Hoult is about 8ft foot tall in heels and wig. His make-up was very pretty. No one could look at Nick. We could only look at his forehead, because we couldn’t make eye contact. We were on the verge of giggling, permanently, with him.’

She said she got the blues when filming ended. ‘I loved it so much. Yorgos is genuinely a genius. The company was fun. It’s full of filth and sex…it’s got everything,’ she sighed.

Yes, fluffy bunnies. Seventeen of them.

Were they animatronic, I wondered?

Did that cause any issues? ‘Well, yes. When they were in the bed with you, they just wee-d. They weren’t house-trained,’ she said.

She didn’t like to ask for a dry nightie because she didn’t want to be ‘troublesome’. ‘I just shut up, because I felt the quicker we got through it, the quicker we could be done.’

The rabbits, on the other hand, had a high old time at historical Hatfield House, where The Favourite was filmed.

‘They quite enjoyed it,’ she said. ‘They had lots of lovely space. They would just nod off and fall asleep, and cuddle up in those lovely hutches.

‘And they had a ball when they were out of the hutches. The crew had to use little fences to corral them. Whoa! They ran round and round the room and they had to try and kettle them.’

She and Emma Stone fell for one floppy-eared creature which they dubbed Strawberry, after the rabbit she voices in the BBC-Netflix three-part adaptation of Watership Down.

Speaking of Netflix, Colman’s main day job now is to portray our present queen, Elizabeth II, in the third and fourth series of The Crown, taking over the pomp and circumstance from Claire Foy.

There are no comparisons between the two, she said, ‘apart from the queen in the title of their names…that’s where the similarities end’.

Supernova’s Yoon Hak in hospital after testing positive for coronavirus