Ole Gunnar Solskjaer has defended Cristiano Ronaldo after the forward stormed down the tunnel following Manchester United’s draw with Everton.

In their last game before the October international break, United held a half-time lead thanks to Anthony Martial’s first goal of the season against Rafa Benitez’s side.

Ronaldo was brought on after 57 minutes as United sought to shore up their lead but eight minutes later, Everton equalised through a fine counter attacking move capped by Andros Townsend.

The home side were unable to find a second goal and as the full-time whistle blew at Old Trafford, a stern-faced Ronaldo stormed off the pitch and straight down the tunnel.

Addressing the incident for the first time on Friday however, Solskjaer took an understanding point of view, insisting Ronaldo and the rest of his squad were right to be frustrated with the result.

‘If you lose two points, the way Cristiano felt like there and then, that’s natural,” Solskjaer said ahead of Saturday’s clash with Leicester City.

‘I don’t want my players to be happy with that situation.

‘Unfortunately, when we don’t win, Cristiano isn’t happy and that’s a mindset that you want from every player. 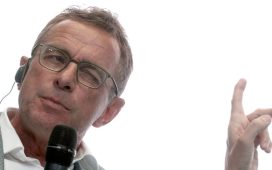