There’s no escaping the fact that Ole Gunnar Solskjaer’s job is on the line at Tranmere.

As a manager myself, it’s a strange feeling addressing such a difficult situation from the opposite side.

But it’s a reality for most bosses out there – there are moments which define your job.

He’s under massive pressure and if he plays a weakened team against a lower league side and gets beaten, then it is a nail in his own coffin.

Of course, Manchester United should win. But pressure has such a strange effect on a team – it can be debilitating.

I’ve experienced it myself so many times and it is draining.

A crowd can lift you.

When players feel the crowd is behind them, you feel a little quicker, stronger and can run longer. It’s the opposite when you get that negative tension coming down from the terraces.

You should shut it out, of course, but that’s hard – sometimes impossible.

Everything becomes more pressurised, the tension and mental strain drains you, makes you tire more quickly, slows down reactions and makes the touch heavier and harder.

United are experiencing that now. It will be aimed at Solskjaer, but the players will feel intense focus on them.

I had it right at the start of my career, when Graeme Souness came under pressure as Liverpool manager.

One of my first games was Bristol City away in the FA Cup – and it was tough. The first game was abandoned because the floodlights failed, which ramped up the pressure.

I hardly knew what was going on. I was a kid who
had just got into the team and suddenly there was all this talk of the manager being sacked – and you can’t help but notice that.

It’s in the papers and players read them. Their friends chat about it and ask what’s going on. And the noise from the fans gets louder, the groans and complaints more audible.

When we played the game at Ashton Gate, Ian Rush scored and then the keeper’s clearance hit me and bounced back to hit the post.

If it had gone in, maybe history would have been different. Instead, I broke my leg in that game and they equalised.

For the replay at Anfield, there was a sense of dread around the ground. I was there hobbling about on my crutches, but I could sense it. I knew there was terrible morale in the team… and it was no surprise when we lost.

United are in that position now.

There are so many elements that are against them. The pitch at Prenton Park is awful – they’ve had some terrible weather conditions and that has created a bit of a mud bath.

There’s that pressure, there will be the tension of the crowd and a lower league team that will be absolutely up for it.

We had that same experience in 2001 when Liverpool went to Tranmere in the FA Cup quarter-final. The weather was bad that day, they were a good team who’d had an incredible cup run, and a shock was expected.

Gerard Houllier picked a team full of Englishmen (and one Scot, Gary McAllister) and asked us to understand the situation, understand the competition and know what was coming.

United have to do that. They have to realise the concentration levels of elite players are better than lower league players and their skill levels are higher.

But it’s hard – because people crumble under those conditions.

And Solskjaer has to do what Houllier did (and, yes, we won 4-2) – pick his strongest team, realise exactly what his situation is, and be ruthless.

If he gambles with his line-up, he will be gambling with his job.

Toyota's Evans one stage away from victory in Sweden 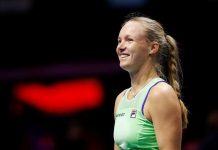 Bertens sets up clash with Rybakina in St Petersburg final