Following the success of the original Oculus Rift, Facebook-owned Oculus doubled-down on VR, launching the Oculus Go, Oculus Quest and the successor to the original Rift, the Oculus Rift S. The Rift S looks to improve on the impressive experience on offer from the first-gen Rift, boasting a new tracking system, an improved design and a higher-res display to enhance your virtual experience, all at the same price as the original.

We’ve spent a lot of time exploring virtual worlds with the Oculus Rift S, and we’re mostly impressed. Find out why in our review.

The Oculus Rift S is available to buy now following a mid-May 2019 release. Surprisingly, Oculus chose to replace the Rift S with the Rift instead of marketing it as a high-end “pro” variant like HTC’s Vive and Vive Pro. What’s even more impressive is that the Rift S is available at the same price as the original Rift; £399/$399, including two Oculus Touch controllers.

It really does provide amazing value for money for those interested in picking up a VR headset, and can be bought directly from Oculus, as well as Amazon, Argos and Currys PC World in the UK, and Amazon and Best Buy in the US.

For more VR inspiration, take a look at our selection of the best VR headsets on the market right now.

The Oculus Rift S was co-designed with Lenovo, utilising the company’s vast experience in AR and VR to improve on what Oculus had created with the first-gen Rift. When compared with the original, just about every aspect of the Oculus Rift S headset has been improved, from the headband fitting mechanism to the overall weight distribution and even the selection of materials used.

One of the first things you’re likely to notice about the Rift S is its weight; it’s heavier than the original Rift at around 561g, but thanks to improvements in overall weight distribution, you don’t really notice the extra heft when the headset is worn. We actually think there’s less pressure on the face compared to the first-gen Rift, especially over longer stints in VR.

That’s further enhanced by the new Halo headband, which takes most of the weight of the HMD. It’s a similar design to that of the PlayStation VR and HTC’s Vive Pro headset, and utilises a crank system to tighten and loosen the halo around your head. Combine that with a supportive top-strap and you’ve got a very comfortable, lightweight VR headset that doesn’t cause aches over long periods of play. 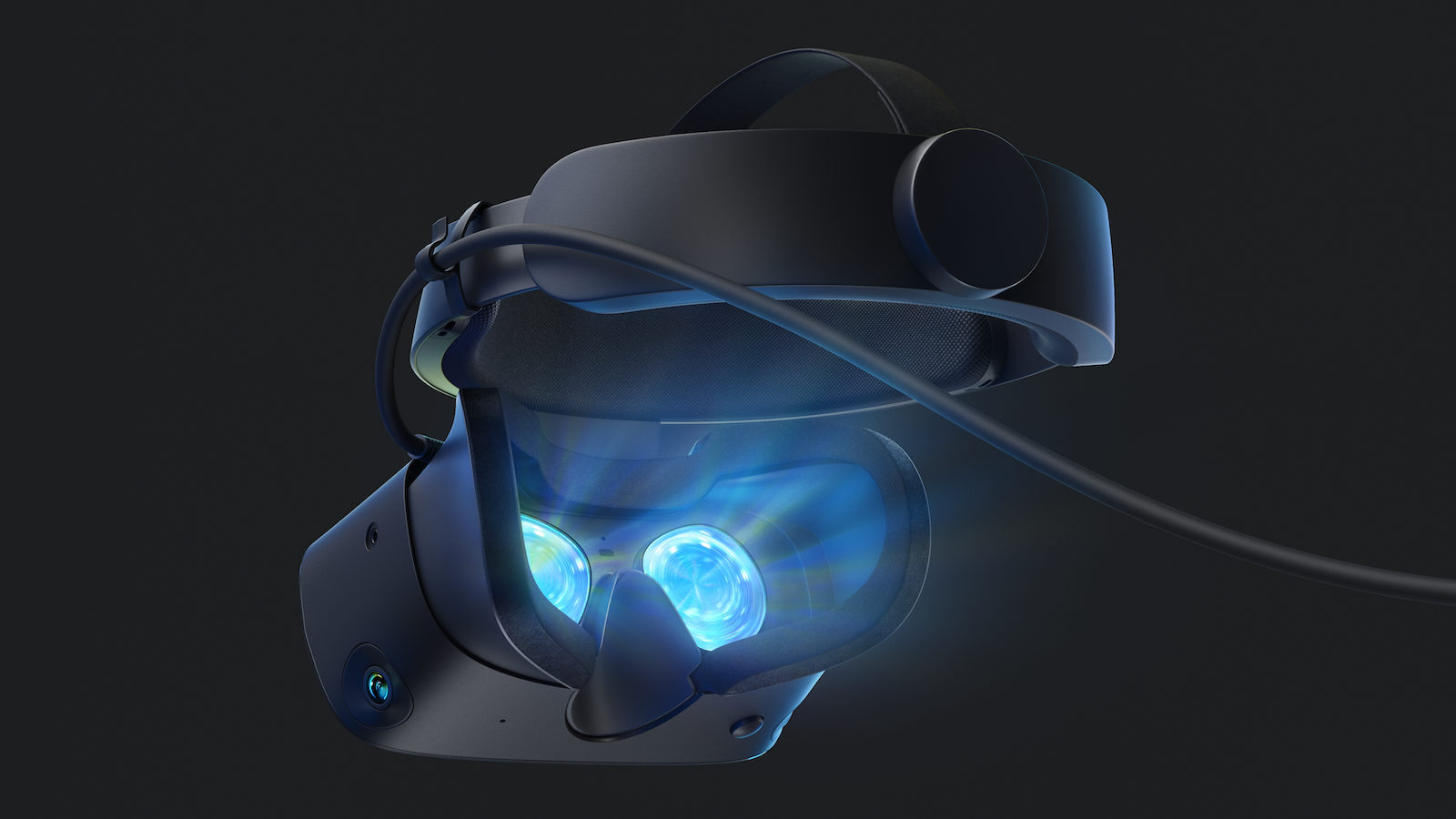 The theme of comfort is continued with the materials used throughout the headset. The material that lines the inside of the Halo headband is soft and spongey, while the breathable material that comes into contact with your face features a soft, suede-like finish that doesn’t leave annoying VR marks like other headsets on the market. It’s admittedly a small change, but one that existing VR users will appreciate a lot.

Though it’s not completely wireless like the Oculus Quest, the cabling of the Rift S has been improved compared to its predecessor. It now only requires a single USB-A 3.0 port and a DisplayPort port for use, with no external power required. This means the cable connecting the headset to your PC is much thinner this time around, and should hopefully be less noticeable too.

We didn’t really notice it during our playthroughs, but like most aspects of VR, it’s a very personal experience and it may bother some more than others.

But while elements of the design have improved, the overall look of the Rift S headset isn’t as clean as that of its predecessor, and there’s one very good reason for that; the cameras. Unlike the first-gen Rift with its material wrap, the Rift S’s black plastic HMD features five cameras that point in just about every direction. These are used for tracking – which we’ll go into detail about below – and there’s no way of hiding them.

It does detract from the overall look, but in reality, who really cares what the headset looks like – you won’t be looking at it while you’re using it, after all! 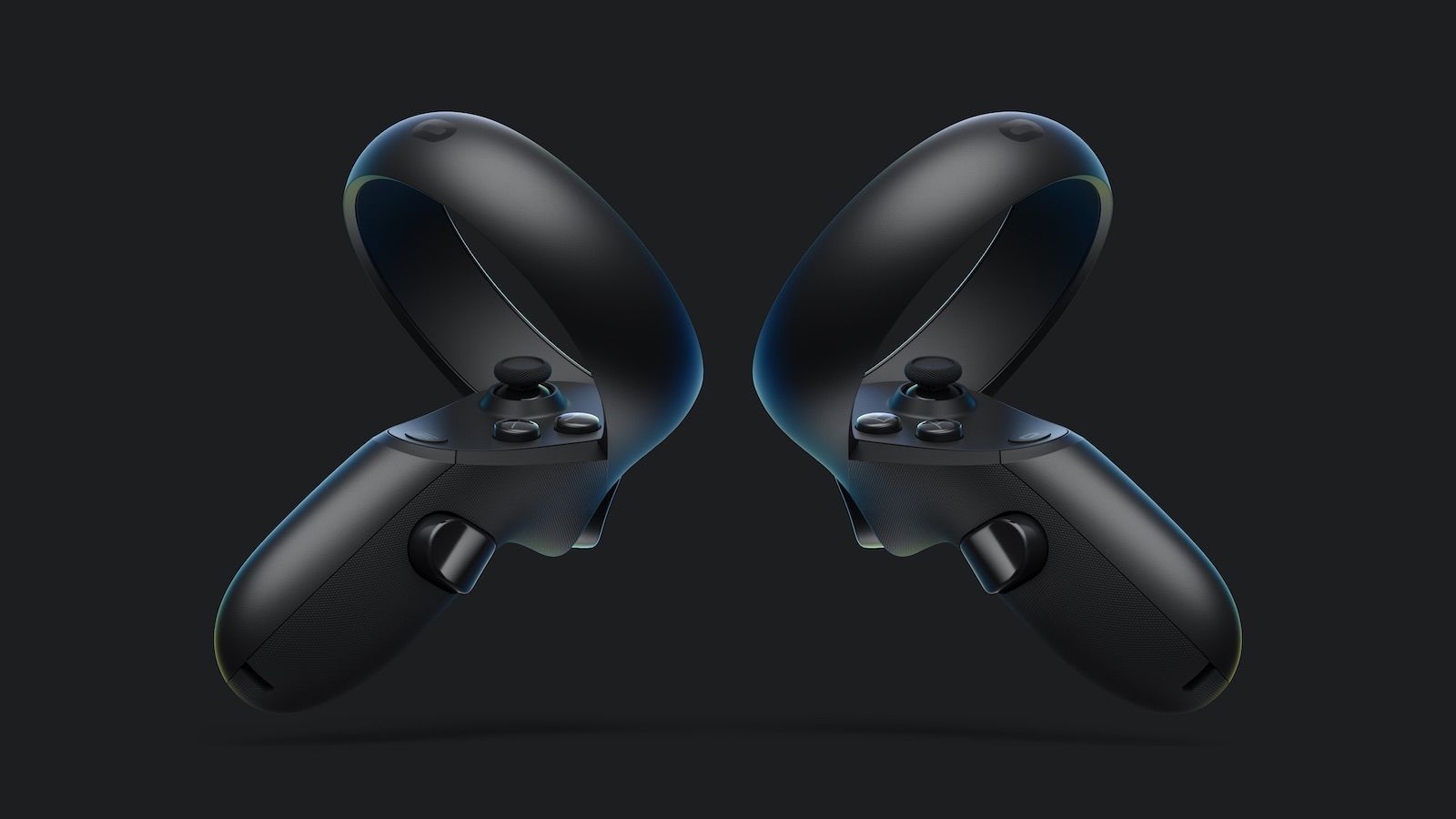 Alongside the headset itself, you’ll find two Oculus Touch controllers. These are used to simulate your hands in VR, and really help you connect to the virtual environment around you.

Thankfully, not much has changed in terms of design or usage, with the only notable difference being the placement of the O-ring (used for tracking). That’s great news as, personally, we think the Oculus Touch controllers are the most ergonomic, comfortable VR controllers on the market right now.

Say goodbye to the Constellation system!

While the Oculus Rift S may not be completely wireless like the Oculus Quest, the experience has been vastly improved by the introduction of inside-out tracking – as indicated by the five cameras mounted on the front of the HMD. This means that, unlike its predecessor, the Oculus Rift S doesn’t require any external sensors (officially known as the Constellation system) to provide perfect 1:1 tracking.

This totally overhauls the setup process of the Oculus Rift S, which was tiresome and sometimes frustrating with the first-gen Rift. The initial setup of the headset takes only a couple of minutes as, once you’ve downloaded and installed the software, you need only select the type of experience (sitting or standing), confirm floor measurements and set up your play area.

Using the new Passthrough+ technology and the front-facing camera of the HMD, you can see the real world without having to remove the Rift S headset. If you think that sounds familiar, you’d be right; it’s similar to the functionality offered by the HTC Vive since release back in 2016.

Anyway, we digress. Once Passthough+ is active, it’s simply a matter of tracing your play area with one of the Oculus Touch controllers. You’ll then see a summary of your play area size, and it’ll let you know if there are any restrictions on the type of game you can play (some games require larger spaces than other for full immersion).

And that’s it! You’ll then be taken to Oculus Home, where you can customise your virtual living space or jump right into one of the many games and experiences available on the Oculus Store.

But what happens when you take the headset off and shut down the computer? You’ll have to set it up again, right? Wrong – well, kinda. If your environment hasn’t changed, chances are the Rift S will recognise the space and will let you start enjoying VR straight away – it’s only if you change the environment, or decide to play in a different space, that you’ll have to go through the setup process again. 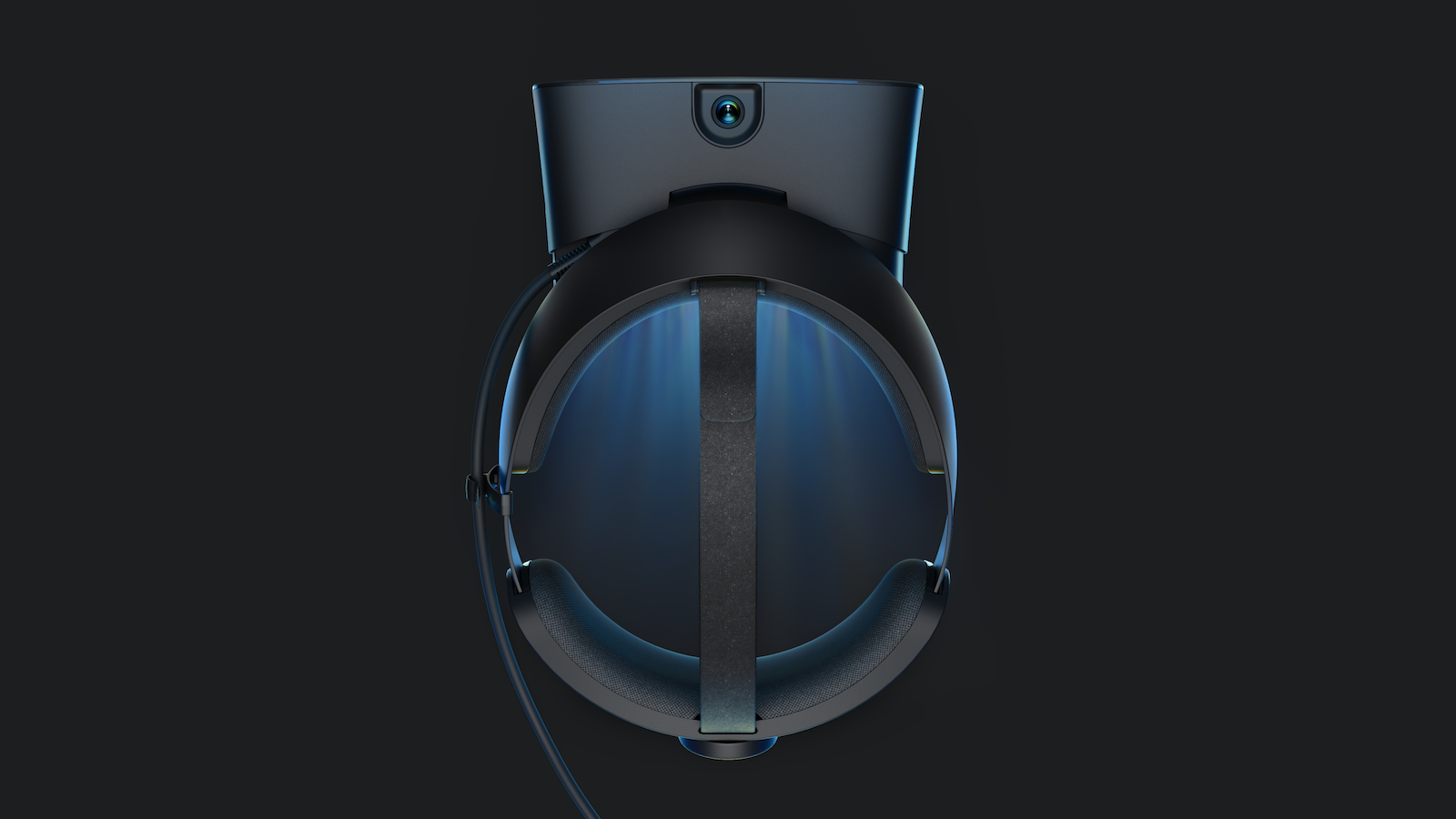 The Oculus Rift S features an upgraded 2560 x 1440 fast-switch LCD display, split at 1280 x 1440 per eye, compared to the 2160 x 1440 (1080 x 1200 per-eye) OLED display of the first-gen headset. The upgraded resolution brings a range of benefits, including a more defined and immersive virtual reality experience, but there’s more to it than crisp, vibrant visuals.

Reading text in VR has been a bit of a nightmare up until now, thanks to the relatively low-resolution displays on offer in VR headsets. Text is often pixelated, and only by getting uncomfortably close to the text can you read it. It goes without saying that having to get that close to read text isn’t true-to-life (for most of us!) and ruins the immersion.

That’s an issue not present with the Oculus Rift S, as the higher-res display makes it much easier to read text in VR. It’s not pixel-perfect by any means, but it’s certainly an upgrade from not only the first-gen Rift, but most other consumer-focused VR headsets on the market at the moment.

The improved display also negates the effects of SDE, or Screen Door Effect, a problem with most first-gen VR headsets. SDE appears as a mesh that overlays the VR experience, and is akin to looking through a screen door (hence the name), but what you’re actually seeing is the space between the pixels. The upgraded display nearly completely removes the effect of SDE, providing a clearer, more defined virtual experience for Rift S users.

You shouldn’t be worried about backwards compatibility, either. Oculus has confirmed that all Oculus Rift content is available on the Rift S, providing a higher-res VR experience without any input from developers. It’s also worth noting that any content purchased for the Rift S will also be available on the Quest and vice versa, as long as you’ve got both headsets (rather obviously) and the app/game is available on both platforms.

It’s not all good news, though. There’s a decrease in the refresh rate of the display, down to 80Hz from 90Hz on the first-gen headset, and while that isn’t really that noticeable in use, what is noticeable is the fixed IPD.

Due to the use of a single display instead of two separate displays, the Oculus Rift S features a fixed IPD of 63.5mm. That’s ideal for those with an IPD between 61.5 and 65.5mm, but if it’s outside of that range, you’re likely to experience symptoms of unalignment, making the experience uncomfortable.

Oculus does offer software-based IPD adjustment to try and correct the issue and while it can help some users, it’s not quite up to scratch compared to a physical slider. When you consider the first-gen Rift offered physical IPD controls with a wide range of 58 – 72mm, it seems like a real downgrade.

The Oculus Rift S features the same directional speakers as Go and Quest, and while they’re acceptable for budget and standalone headsets, it doesn’t seem right on Oculus’ flagship product. In fact, we think it’s quite the downgrade from the integrated headphones available on the first-gen headset.

The directional speakers good for casual or social VR, but they don’t provide the immersive experience that standard headphones offer. The only saving grace is that there’s a 3.5mm headphone jack on the side of the Rift S, allowing you to use your own wired (or wireless) headphones when using the headset.

The Oculus Rift S, overall, is an improvement over the first-gen Oculus Rift; it boasts a much-improved design with a comfortable Halo headband, inside-out tracking that eliminates the need for external sensors and a higher-res display that almost removes the effects of SDE, all for the same price as the original.

However, it’s not the perfect upgrade. The Rift S features the same directional speakers as the Oculus Quest and Oculus Go, and we don’t think they’re right for Oculus’ flagship product – especially when the first-gen Rift featured adjustable built-in headphones. The use of a single display instead of dual displays also means there’s no physical IPD adjustment, so if you’re outside of the ‘average’ range, you’ll struggle to enjoy the experience.

So yes, while the Oculus Rift S does provide an upgraded virtual reality experience, it feels more like two steps forward and one step back.

Coronavirus: Scotland begins to ease out of lockdown