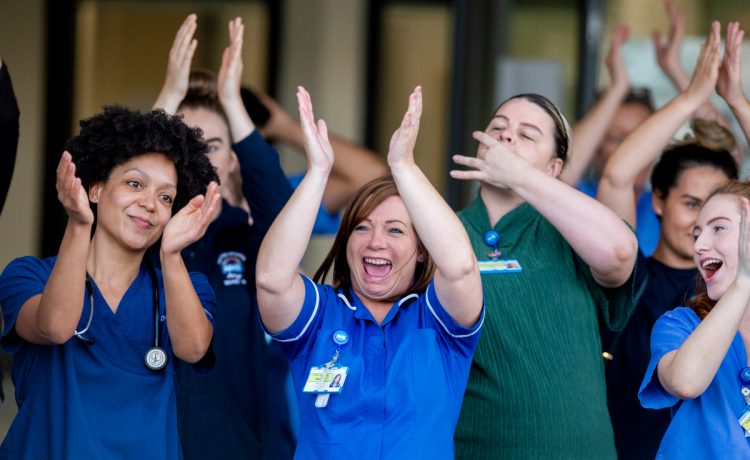 NURSES are calling on Boris Johnson to turn his applause and kind words for the NHS into an immediate pay rise.

They have joined other frontline health workers in writing to the Prime Minister urging him to bring forward pay talks.

Their current pay deal ends next year but unions say members’ efforts during the pandemic should be recognised now.

They say a “meaningful early pay rise” will help attract and retain staff, including those who returned to help with coronavirus.

Their letter to Mr Johnson says: “In recent months NHS staff have shown immense strength in the face of adversity and have attracted huge support and appreciation from the public and politicians alike.

“You have also spoken proudly about the work of NHS staff and talked movingly about the kind of care you received personally.

“The pandemic has shone a light on the essential contribution made by NHS workers and the level of skill and commitment displayed.

“The public will expect the government to be mindful of this when the next pay settlement is considered.”

They stress they are not seeking a “Covid bonus payment” but rises that make up for years of caps and freezes.

They add: “The applause and kind words were a short-term morale boost for many health workers but now it is time to begin these pay discussions without delay.”

As the clapping returns this weekend for the NHS’ birthday, ministers can show how much they value health staff by committing to an early pay rise that the entire country supports.

The unions’ call comes as the NHS celebrates its 72nd birthday on Sunday with a national round of applause at 5pm.

Sara Gorton, from Unison, said: “Throughout lockdown, the public has seen the immense dedication, commitment and compassion shown by NHS staff, and now expects them to be rewarded.

“As the clapping returns this weekend for the NHS’ birthday, ministers can show how much they value health staff by committing to an early pay rise that the entire country supports.”

Hannah Reed, from the Royal College of Nursing, said: “Across the NHS, nursing and healthcare staff are still working harder than ever.

“These people are the country’s greatest asset. When we celebrate that, politicians must think about how staff can be fairly paid and valued.

“They do not need more warm words and praise that, to many, is already beginning to feel hollow.

“An earlier pay rise will go some way to showing the government values all they do, not just this year but day in, day out.

“Proper recognition and pay to match it will go some way to addressing the number of unfilled jobs.”

The unions have also written to Chancellor Rishi Sunak.