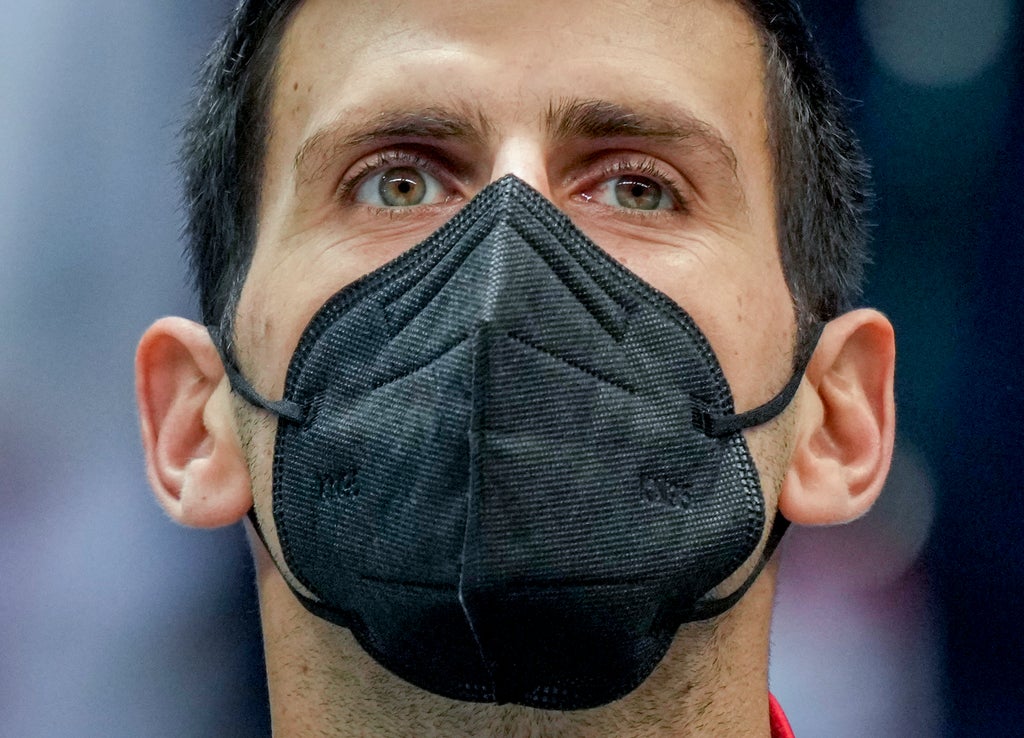 Novak Djokovic: Why was tennis star denied entry into Australia and what happens next?

Novak Djokovic’s fate will be decided at an appeal hearing on Monday morning in Australia after a bid by the Australian government to have the case delayed to Wednesday was rejected. The government tried to push the hearing back by 48 hours but a court order by judge Andrew Kelly said it had been “refused without prejudice” and that the case would be heard at 10am on Monday.

The case will centre around whether Australia’s government and border force have made errors in their handling of Djokovic’s visa and their decision to revoke it. Djokovic, 34, claims he satisfied the requirements for the visa because he had contracted Covid-19 in December, but the Australian government says that rule of allowing those who have previously had the virus only applies to Australian residents re-entering the country, not visitors. Photos have subsequently emerged showing Djokovic at public events, unmasked, the day after his supposed positive PCR test.

Meanwhile Djokovic’s lawyers have asked that their client be moved from the immigration detention hotel, which has been criticised for its poor conditions, to somewhere suitable for Djokovic to train ahead of the Australian Open. Follow all the latest news and updates ahead of Djokovic’s hearing below.

Djokovic could remain detained even if he wins appeal

The latest wrinkle in proceedings to emerge today is that Djokovic could still remain in detention in Australia even if he wins his appeal against the cancellation of his visa.

“An order for immediate release does not prevent re-detention if there is power to detain,” a document released by Australia’s Home Affairs Department on Sunday read.

There is also no guarantee Djokovic will be able to play in the tournament that begins next week, even if he does succeed today.

The government claim they have the power to make “another cancellation decision” in that scenario. Stay tuned.

Murray calls Djokovic saga ‘really not good for tennis at all’

Former British number one Andy Murray has expressed concern for the Serbian and says his predicament is “really not good for tennis at all”.

“I think everyone is shocked by it, to be honest,” five-time Australian Open finalist Murray told reporters in Australia.

“I’m going to say two things on it just now. The first thing is that I hope that Novak is OK. I know him well, and I’ve always had a good relationship with him and I hope that he’s OK.

The hearing itself was meant to begin at 10am Melbourne time (11pm UK) but is yet to start because of technical difficulties.

The court say they are aware and are working to rectify the situation.

As if we needed any more drama.

Djokovic’s views on vaccines are a subject of much controversy.

Back in April 2020, Djokovic said he was “opposed to vaccination” and it was revealed in court documents on Saturday that he has not been innoculated against Covid.

He also said he “wouldn’t want to be forced by someone to take a vaccine” in order to participate in tournaments.

Rival Rafael Nadal says Djokovic knew there would be “consequences” of his decision.

“I went through the Covid, I have been vaccinated twice. If you do this, you don’t have any problem to play here. That’s the only clear thing,” the Spaniard said this week.

“The only for me clear thing is if you are vaccinated, you can play in the Australian Open and everywhere, and the world in my opinion have been suffering enough to not follow the rules.

“Of course I don’t like the situation that is happening. In some way I feel sorry for him. But at the same time, he knew the conditions since a lot of months ago, so he makes his own decision.

“The only thing that I can say is I believe in what the people who know about medicine says, and if those people say that we need to get vaccinated, we need to get the vaccine.”

What to expect at the Djokovic hearing

Right then, the hearing is set to get underway and this is what we can expect.

The judge presiding is Judge Anthony Kelly. The lawyers for Djokovic are Nick Wood SC and Paul Holdenson QC. The lawyer acting on behalf of home affairs minister Karen Andrews is Christopher Tran. Djokovic himself will not be present.

Djokovic’s side will argue that the original visa decision is invalid on a number of grounds and should be overturned.

The government will argue the opposite and that Djokovic did not provide adequate evidence for quarantine-free entry to Australia.

Both parties are set to give oral submissions virtually that are expected to be between 90 and 120 minutes.

There are then four possible outcomes.

Djokovic wins the case and is allowed to stay and play at the Australian Open.

He could also not win the case but with no immediate decision from the hearing could be given special permission to stay and play while a decision is made.

He could also not lose the case but also not be given permission to stay and he subsequently leaves the country. He could lose the case and be deported from Australia immediately.

Got all that? Right, on we go.

Australian Open chief Craig Tiley on Sunday blamed conflicting and quickly changing directives in a “challenging environment” for the confusion that resulted in Novak Djokovic being refused entry to Australia on a medical exemption.

Tiley refused to apportion blame for the saga over Djokovic’s exemption from the mandate that people entering the country be vaccinated against coronavirus.

He said Tennis Australia had engaged in discussions with federal and Victoria state officials for several months in order to ensure the safe passage of players into the country.

“We are not going to lay the blame at anyone,” Tiley said. “All I can say is that, primarily because there is (so) much contradictory information the whole time, every single week we were talking to home affairs, we were talking to all parts of government to ensure that one, we were doing the right thing, and the right process with these exemptions.

Djokovic one of two players detained

Djokovic was one of two players put into detention in the hotel that also houses refugees and asylum seekers. A third person, reported to be an official, left the country voluntarily after border force investigations.

The other player was 38-year-old doubles specialist Renata Voracova, who had already been in Australia for a week before an investigation by the border officials. The Czech foreign ministry said Voracova voluntarily left Australia after deciding not to appeal the decision.

The court hearing on Monday will determine whether Djokovic is not far behind her.

Australian prime minister Scott Morrison, who said “rules are rules” and that incoming passengers were responsible for meeting border regulations, has been accused of taking advantage of Djokovic’s case to improve his battered standings in popularity polls ahead of a looming election.

Djokovic’s plight has prompted claims from Serbia that Djokovic is being treated like a prisoner.

The player himself appears to have become a standard-bearer for anti-vaccine groups, including some people who’ve gathered outside for support outside his immigration hotel.

Australian Open organisers have been been taking some heat over the Djokovic situation, and with apparent good reason.

Tennis Australia, which runs the tournament and organizes the logistics for more than 2,000 incoming players, staff and officials, reportedly gave incorrect interpretations to players about the acceptable grounds for an exemption.

That included the interpretation that having had a coronavirus infection within the previous six months would qualify. Organizers have blamed the federal government for its mixed messages on the policy.

Australian media have reported details of the court documents expected to entered into testimony on Monday.

It showed Djokovic received a letter from Tennis Australia’s chief medical officer on 30 December “recording that he had been provided with a ‘medical exemption from Covid vaccination’ on the grounds that he had recently recovered from Covid.”

It said Djokovic’s first positive test was 16 December and, on the date of issue, the exemption said the 34-year-old player “had not had a fever or respiratory symptoms in the past 72 hours.”

Djokovic attended a 17 December event in Belgrade honoring young tennis players. The event was covered by local media, and parents posted photos on social media showing Djokovic and the children not wearing masks. It’s not clear if Djokovic knew the results of his test at the time.

On 14 December, Djokovic had attended a Euroleague basketball game between Red Star and Barcelona in a packed sports hall in Belgrade.

He was photographed hugging several players of both teams, including some who soon later tested positive.

In Serbia on Saturday, Djokovic’s family held a rally in support of him in Belgrade for the third successive day, and prime minister Ana Brnabic assured him of her government’s support over his visa battle to ensure he can enter Australia and defend his Australian Open title.

The tournament begins 17 January – just a week from his court date.

“We’ve managed to make sure gluten-free food is delivered to him, as well as exercising tools, a laptop and a SIM card so that he is able to be in contact with his family,” Brnabic said.

It comes as Australian media reported that immigration officials denied a request to have Djokovic’s personal chef cook meals for him in the immigration hotel.