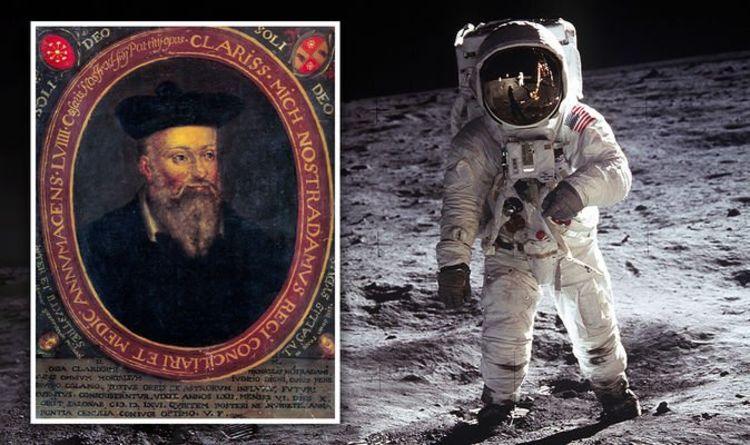 Michele de Nostredame, better known as the prophet Nostradamus, is regarded by many as the world’s greatest mystic and clairvoyant. Nostradamus’s followers credit the 16th-century writer with incredible powers of foresight, believing he predicted the future in cryptic passages he penned before his death in 1566. Nostradamus is said to have accurately predicted world-changing events, such as the Great Fire of London in 1666 or the assassination of J.F. Kennedy in 1963.

The poems rarely mention specific events, dates or places, but many conspiracy theorists are convinced a wealth of information can be found in the quatrains.

The bulk of Nostradamus’s writings were published in his 1555 book Les Propheties.

The tome of prophecies is divided into 10 sets of verses, or Centuries, each containing 100 quatrains.

On July 20, 1969, two men touched down on the surface of the Moon in a historic event that marked the culminating point of the Cold War Space Race.

The men were NASA astronauts Neil Armstrong and Buzz Aldrin, who were joined by Michael Collins who stayed behind in lunar orbit.

In the years since the Moon landing, conspiracy theorists have questioned this story, claiming the achievement never happened and was instead filmed in a Hollywood studio.

Even more bizarrely, it has been suggested the Moon landing did happen, and Nostradamus knew about it more than 400 years in advance.

READ  The World's Largest Toothpaste Collection Belongs To A Dentist

When translated from French, the passage reads in English: “He will come to go into the corner of Luna,

“Where he will be captured and put in a strange land:

“The unripe fruits will be the subject of great scandal,

“Great blame, to one great praise.”

Luna is the Latin word for the Moon and in this context, it is said to speak of the Moon landing.

Similarly, the “strange land” in the passage has been cited as evidence of Nostradamus describing travellers flying to an exotic place – astronauts on the Moon.

Unfortunately, there is no credible evidence to back claims Nostradamus had powers that allowed him to predict the future.

Most sceptics agree Nostradamus was simply a writer whose puzzling poetry has captured the imagination of thousands of people worldwide.

Brian Dunning, host of the Skeptoid podcast, argued people who claim to find hidden meaning in Nostradamus’s writings, do so without any basis in reality.

He added: “Michel de Nostredame was truly one of the brilliant lights of his day, but to subscribe to false stories and urban legends is to disrespect who the man actually was.

“Appreciate his contributions to medicine and Renaissance literature, and don’t trivialize his good works in favour of a pretended history of paranormal magical powers.”