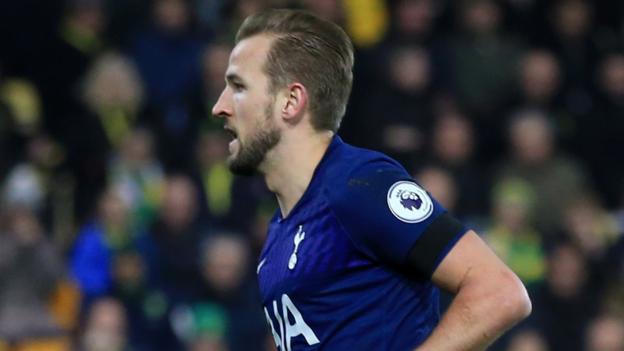 Mario Vrancic opened the scoring with his first Premier League goal for the Canaries before they were denied a second when Teemu Pukki’s goal was ruled out for a marginal offside by the video assistant referee (VAR).

Spurs improved after the interval and Christian Eriksen drew them level with a stunning free-kick but Norwich retook the lead when Serge Aurier put through his own net.

The visitors had their chances and Dele Alli’s neat finish was ruled out for offside, before Kane drew Christoph Zimmermann into a lunging challenge inside the area.

The England striker sent Tim Krul the wrong way from the spot to secure a point for the north London side.

Norwich remain bottom of the table and six points from safety, while Spurs are up to fifth, two points behind fourth-placed Chelsea who have a game in hand.

Norwich last won in the Premier League on 23 November, but they started brilliantly against Jose Mourinho’s Spurs.

They played with attacking intent from the opening exchanges as Vrancic rolled the exciting Onel Hernandez through on goal, only for Paulo Gazzaniga to sprint off his line to collect the loose ball.

That set the tone and Daniel Farke’s side pressed their visitors high up the field. When Juan Foyth hesitated and lost possession deep in his own half, Vrancic carried the ball with urgency before firing past Gazzaniga with a smart finish.

Then came a moment of controversy as Vrancic turned provider to fire a long ball onto the chest of Pukki, who held off Jan Vertonghen to slide the ball into the net, only for the goal to be ruled out.

The Finnish striker appeared to come back onside before the ball was played over the unconvincing Spurs defence, but VAR adjudged his right arm to be offside.

Spurs hit back after the interval but Farke’s men rode the storm and retook the lead as Pukki continued to cause confusion, his effort deflecting from Toby Alderweireld onto Aurier and into the Spurs’ net.

As Spurs searched for the equaliser, the hosts demonstrated a steely mentality and dived into tackles – but ultimately did so once too often. Zimmermann lunged into a tired-looking tackle to concede the penalty and Kane punished Norwich.

Points against the so-called ‘big six’ must be built on if the Canaries are to become the first side bottom of the Premier League at the turn of the year to overcome a six-point deficit from safety and survive.

Kane and Erisken demonstrate their quality

When Mourinho took the Spurs job he spoke about the “quality” he was inheriting from Mauricio Pochettino, and Kane is exactly the type of player the Portuguese was referring to.

The Spurs and England captain had an ineffective first half despite latching onto a long ball from Alderweireld and firing at Krul from close range.

But when Spurs found themselves a goal behind for the second time in the match, Kane came alive in the penalty area and dragged his team level.

The striker enticed the challenge from Zimmermann before checking back on his left and winning the spot-kick, which he subsequently converted with ease.

Another player Mourinho would have been keen to work with on his arrival at the club is Eriksen, and the midfielder’s second-half performance proved exactly why.

There has been plenty of speculation over the Dane’s future, with his contract due to expire at the end of the season. Making his first league start under Mourinho, he struck his free-kick with aplomb to draw the visitors level.

Eriksen had more touches of the ball (118) and more shots (four) than any other player and he was crucial to the visitors regaining a foothold in the game after going behind for a second time.

If Mourinho can persuade the midfielder his future is best served under him at Spurs, he may be the difference between securing Champions League football for next season or missing out altogether.

‘The same defensive mistakes’ – what they said

Tottenham boss Jose Mourinho told Sky Sports: “I think the same defensive mistakes we made in the first half, we made in the second half. This is being a little bit of our history.

“We conceded two very bad goals. Our defensive mistakes are match after match.

“I have lots of work to do but it has been difficult because I always say you have to try and hide your fragilities. We have to improve defensively because there are too many individual mistakes. That’s very frustrating because we play well and cannot be more offensive than we were in the second half.

“Norwich defended with their souls and their lives.”

On Christian Eriksen’s future: “I don’t want to speak about it. We are so open with one another. We keep it to ourselves. Obviously I share it with my boss. But it’s just between us. The only thing I can say is he is trying to help the team and I am happy with his man of the match.”

Norwich manager Daniel Farke told Match of the Day: “Over the course of the 90 minutes, a draw was a fair outcome and a good point for us.”

On VAR: “I don’t want to complain too much about this topic. My understanding is that VAR should make the game more fair. My gut feeling [after Pukki’s goal] was that we would find a situation where it was offside.

“Perhaps they found a part of his shoulder that was not onside. In my eyes, VAR doesn’t make the game more fair in this situation. The striker should be given the advantage. Being 2-0 up at half-time would have changed the game. It was a crucial situation.

“It’s a good start to the second half of the season and hopefully we can add many more points.”