Non-league team refuse to play after going 8-0 down 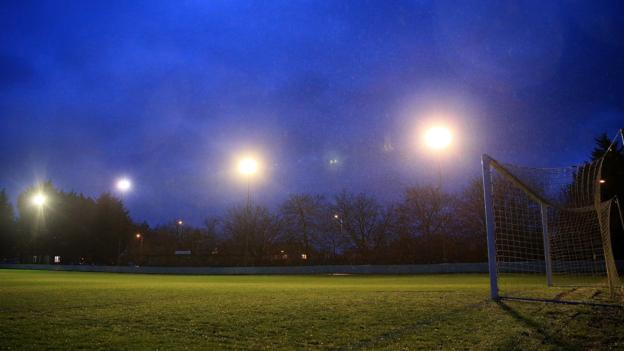 Imagine the scene – your team are 8-0 up at half-time against your big cross-town rivals in the highlight of your festive fixture list.

But, rather than battle it out, your opponents decide they would rather go home than come out for the second half.

Well, that is exactly what happened in Abingdon on Saturday as the Oxfordshire town’s big game between Abingdon Town and Abingdon United ended in bizarre circumstances.

United, who are bottom of Hellenic League Division One East and won just twice all season, travelled to second-placed Town.

“In my 30 years of football I’ve never known anything like that to happen,” Town secretary John Blackmore told BBC Sport.

The hosts took the lead after four minutes and were 4-0 up inside quarter of an hour.

After missing a chance for a fifth goal from a couple of yards out, Town went to town in the final 15 minutes of the half – and, as it proved, the match – as they hit four more.

Beleaguered United’s players, who ply their trade in the 10th tier of English football, decided they had had enough and refused to come out for the second period.

“The game started off fine, there was no nastiness or anything like that, but we were 8-0 up at half-time and then their manager and players didn’t come out for the second half,” added Blackmore.

“There was a reasonable crowd there of about 160 people and they were as gobsmacked as anybody else.

“We want to win a game, but not in this sort of fashion.”

It is understood that United’s players left their kit behind in the changing rooms upon departing the ground at half-time.

“After all the problems we had last year we hoped we had turned a corner and could stabilise the club,” said Brian Kirk, the club’s chairman and secretary, who was not at the game.

“This is incredibly disappointing to hear, but I can’t make too many more comments until I can get hold of the manager.”

The Hellenic League told BBC Sport they will review the match report and decide if any action needs to be taken against Abingdon United as a result of the game.