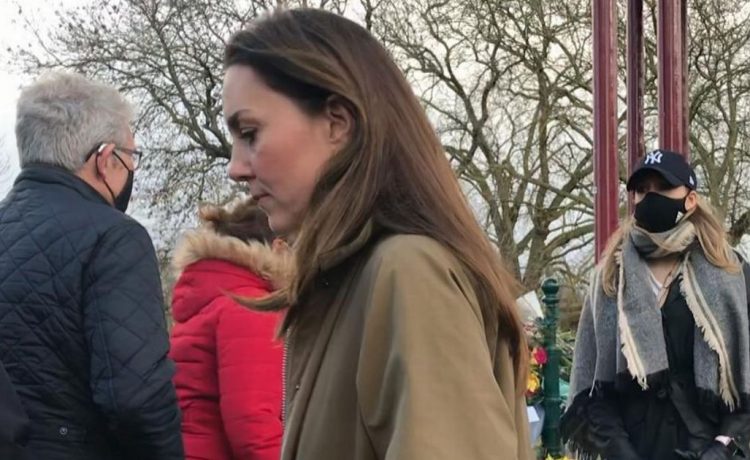 Number 10 refused to say whether Kate Middleton broke the law by attending the Sarah Everard vigil on Saturday.

The Duchess of Cambridge laid a bunch of daffodils from Kensington Palace in Clapham Common, where a memorial was set up for Sarah Everard, whose remains were found in woodland in Kent last week.

Kate, 39, who was without obvious minders, laid the flowers she had personally picked from the gardens of her home at Kensington Palace and walked alone across the common back to her car.

Met Commissioner Cressida Dick, who is under fire over the heavy-handed policing of the vigil, said on Sunday that she would have attended the event herself “if it had been lawful.”

But asked if the Duchess’ visit – which took her 100 miles from her home in Norfolk – had been lawful, Downing Street did not answer.

The Prime Minister’s official spokesman said: “We understand the strength of feeling and the PM shares in the sadness and shock at Sarah’s death.

“As the Met said themselves for over six hours, hundreds of people came to lay flowers and pay their respects to Sarah on Clapham Common in a safe and lawful way.”

Speaking at a National Express depot near Coventry’s Pool Meadow bus station, Boris Johnson said society and the Government needed to ensure that women’s complaints about violence are properly heard.

Asked if police at the Sarah Everard vigil had been “just enforcing Covid rules” set by the Government, Mr Johnson said: “The reality is that the country is united still in shock and grief about what happened to Sarah Everard and we must do everything we can to find the answers.

“Today in the House of Commons, there’s a debate beginning and a vote tomorrow on new measures that the Government is bringing in for tougher sentences for rapists … and new measures to tackle domestic violence.”

Critics say the measures in the bill don’t go far enough – and are alongside more divisive measures.

The tougher sentences for rapists in the bill amounts to making the minimum jail term for serious sexual assault four years. The bill also increases the maximum sentence for vandalising a statue to ten years.

Mr Johnson added: “I hope those go through. But I think the fundamental issue that we have to address as a country, and as a society and as a government is that … women in particular must feel that when they make serious complaints about violence, about assault, that they are properly heard.

“We are going to make sure that that happens.”