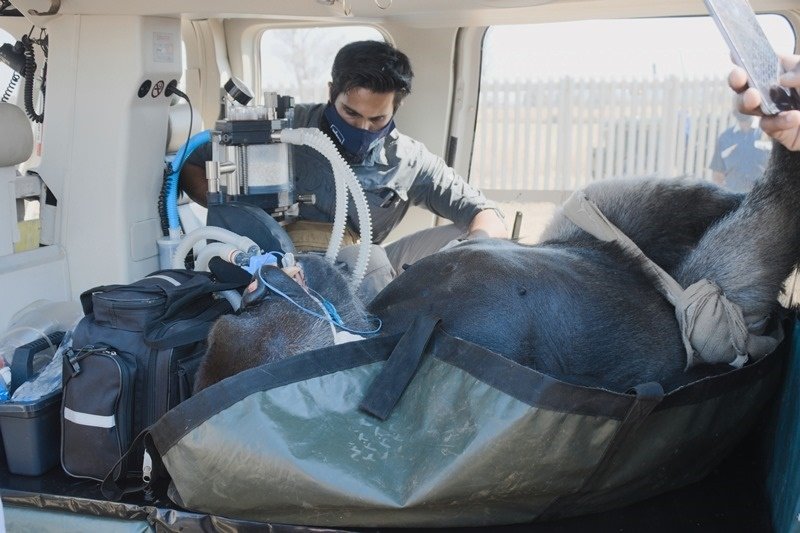 Dr Kresen Pillay, clinical veterinarian at the Johannesburg Zoo and UP alumnus, does a final check of Makoko before he was offloaded from the helicopter.

No, it’s a helicopter carrying a 210kg gorilla and it landed at the University of Pretoria (UP) Faculty of Veterinary Science on Saturday with a specific mission made possible by various role players.

The special patient aboard the helicopter was Makoko, a 34-year-old male Western lowland gorilla from the Johannesburg Zoo who was airlifted to Onderstepoort for a CT scan of his nasal passages.

The Johannesburg Zoo veterinarian and UP alumnus, Dr Kresen Pillay, had treated Makoko several times since December 2019 when he first developed a discharge from his nose. The recurrence of the symptoms, however, indicated that there was a more serious underlying problem.

On 20 May, a team of veterinary specialists from the faculty gathered at the Johannesburg Zoo to assist Pillay with an extensive health examination of Makoko.

The examination included a wide range of blood tests, chest X-rays, a dental and eye examination as well as a heart ultrasound scan.

Professor Gerhard Steenkamp, a veterinary dentist and maxillofacial surgeon at the faculty, examined Makoko’s nasal passages. He found that they were almost entirely blocked with what looked like several tumours.

He collected some biopsies from one of the intranasal masses. These were later confirmed to be inflammatory masses or polyps. There was some relief that no cancerous cells were found in the biopsied tissue.

Some of the tests to evaluate Makoko’s heart, however, indicated that he had early heart disease and the intranasal tumours would still need to be surgically removed.

After the initial examination, the team planned to get Makoko to the faculty’s Onderstepoort Veterinary Academic Hospital (OVAH) for a CT scan so that Steenkamp could assess the extent of the mass in the gorilla’s nose.

Due to his size and strength and the potential stress involved, it was clear that the gorilla would have to be anaesthetised for the entire journey to the hospital.

Since road transport would take too long, the team arranged for a helicopter through the NGO Flying for Freedom SA to transport Makoko to and from Onderstepoort for the procedure.

The helicopter big enough for this purpose belongs to Mike Barnes from the company MCC Aviation who supports Flying for Freedom SA and who offered his services at no cost. 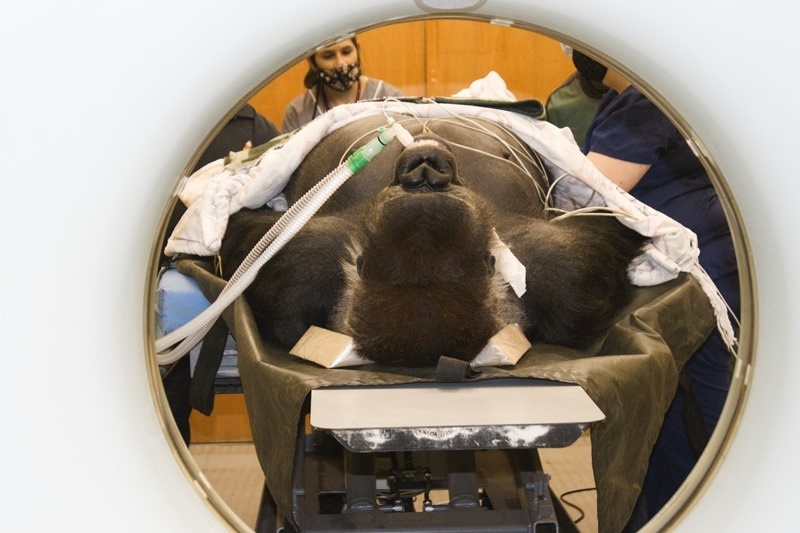 Makoko is prepared for the CT scan.

On Saturday morning, Pillay and Dr Justin Grace, also from the faculty, anaesthetised Makoko in his enclosure and they flew with him to the Veterinary Academic Hospital, where Steenkamp and Professor Adrian Tordiffe, a wildlife specialist from the faculty with experience in the medical management of gorillas, were waiting to conduct the scan.

The faculty’s vets and other staff involved also volunteered their time and expertise to assist Makoko.

The procedure went according to plan, but the results confirmed that the inflammatory tissue had filled most of Makoko’s nasal passages and sinuses.

Steenkamp and Dr Kobus Venter, a local ear-nose-and-throat surgeon, evaluated the CT scans and have started making plans for what is likely to be quite extensive nasal surgery.

The surgery will take place at the Johannesburg Zoo’s veterinary hospital in three weeks’ time.

After the CT scans, Makoko was safely returned to his night room at the Joburg Zoo.

The well-known company, dnata, that has partnered with the University of Pretoria to protect endangered animals through the Wild over Wildlife programme, has offered to pay for the CT scans.

Issued by the Faculty of Veterinary Science, Onderstepoort. 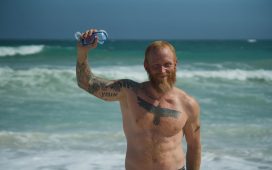 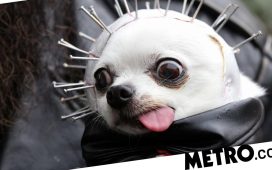