No deal Brexit: 'Britain AGREES with Barnier' as AVALANCHE of punters bet on no deal 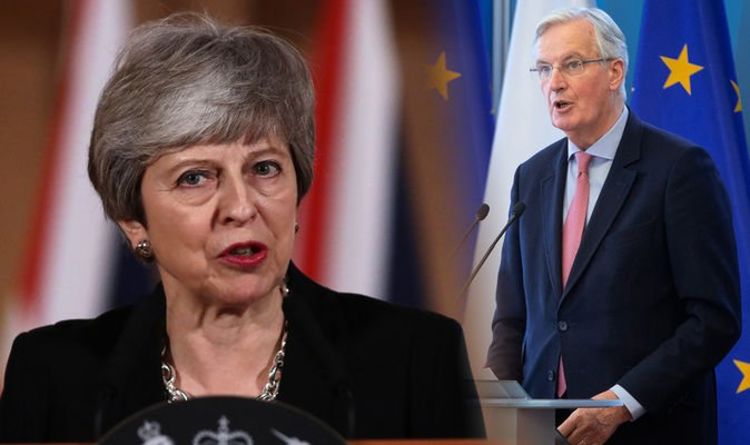 Prime Minister Theresa May will request a further delay to Brexit as the political deadlock remains. In a statement inside No 10 on Tuesday, Mrs May said she is open to speaking with opposition leader Jeremy Corbyn to see if a compromise can be found. But the proposal from the Prime Minister has been met with mixed opinion and angered Tory Brexiteers accusing ministers of “entrusting the final handling of Brexit to Labour”.

Former foreign secretary Boris Johnson said he could never agree to a customs union with the EU, one of the proposals backed by the Labour leader.

Currently, the UK will part ways with the European Union on April 12, unless the Prime Minister lays out a way forward on Brexit.

Mrs May said in a statement on Tuesday she would seek further extension to the deal, but it would be as “short as possible”.

Her bid now is to leave the EU with a deal in hand before May 22 – only one day before the European elections take place to avoid having to elect British MEPs.

However, a no deal Brexit scenario is still very much an option and the EU has so far not agreed to the extension although EU Council chief Donald Tusk promised to listen to the Prime Minister’s latest plan and urged European colleagues to do the same.

But an EU diplomat told Express.co.uk: “There must be European Parliament elections in the UK.

“May will need to produce a good reason to convince leaders of a short extension. It’s not very likely.”

This morning European Chief Negotiator for the United Kingdom Exiting the European Union Michel Barnier said a no-deal Brexit is now more likely than ever.

Michel Barnier said a long extension to the UK’s April 12 exit date had “significant risks for the EU” and a “strong justification would be needed”.

In a speech at the European Police Centre on Tuesday morning, Mr Barnier said: “No deal was never our desire or intended scenario but the EU 27 is now prepared.

The comments came ahead of an eight-hour Cabinet meeting, where the Prime Minister and her team hoped to thrash a solution to the impasse at Westminster.

The recent development has also made political punters place a flurry of bets on a no-deal scenario being the most likely Brexit outcome.

According to bookies Betfair, a no-deal Brexit is now at 2/1 on Betfair Exchange as a £50k bet has been made in the last few hours on the market.

Betfair Spokesperson Katie Baylis said: “With talk today getting louder in both the UK and in Europe that a No-Deal Brexit is looking more likely, and the Government reportedly ramping up no-deal preparations, we’ve seen an avalanche of bets on the Betfair Exchange No-Deal Brexit market.

“More than £50k has been wagered on this market in the last few hours with the odds of a No-Deal Brexit now at 2/1, from 11/4 yesterday, 5/1 last week and 16/1 just two weeks ago, with plenty of punters agreeing with Michel Barnier that the UK is destined to crash out without a deal.”

READ  UK lockdown to be reviewed in days by Cabinet as a whole, Michael Gove says