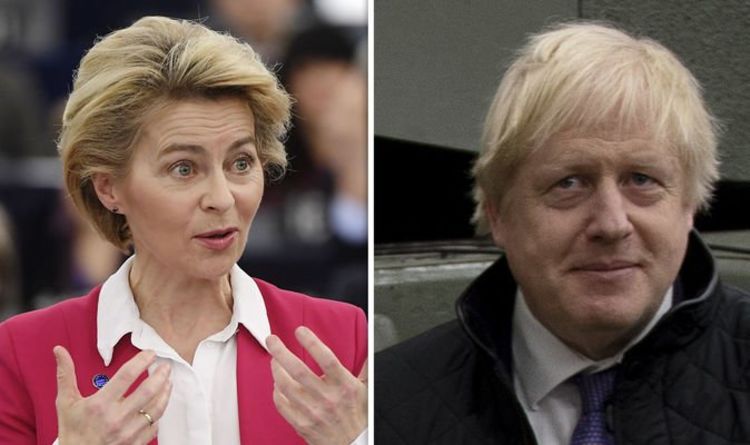 According to the Mail On Sunday, Mr Johnson’s task force will be operational on January 31. David Frost, the Prime Minister’s chief Brexit negotiator will head the team. The revelation comes after European Commission President Ursula von der Leyen raised doubts a free trade agreement could reached by the end of 2020: “We should seriously ask ourselves if all these negotiations are possible in such a short time.

“I think it would be reasonable to take stock mid-year and, if necessary, agree on an extension.”

Negotiations for a new trade agreement with the bloc cannot start until January 31 when Britain leaves, Mr Johnson has drafted legislation requiring Britain to leave the transition period in December.

A Government source said Mr Frost’s team will be based at Number 10 and be focused on hitting the deadline.

They said: “In 2020, we will move forward to establish a future relationship and free trade agreement with the EU.

“Following the Election, the Government has a clear and renewed mandate to achieve this.

“We want our new relationship to be based on an ambitious free trade agreement and a close friendship between sovereign equals.”

Ms von der Leyen’s concerns have been dismissed as “tactics and bluster” with claims any “genuinely held concerns about timing” would have been aired when the EU and Mr Johnson reached a deal in October.

He succeeded Sir Olly Robbins in both positions.

Mr Frost has held several roles within the diplomatic and civil service, including being ambassador to Denmark, EU Director at the Foreign and Commonwealth Office as well as director for Europe and International Trade at the old Department for Business.

He was previously as Brexit advisor to Scottish First Minister Nicola Sturgeon.

Speaking to The Telegraph a Government source previously hit back at claims a new agreement cannot be reached by the end of 2020.

They commented: “EU officials claimed that they wouldn’t reopen the Withdrawal Agreement, but they did as it was plainly in our shared interest.

“There is clearly political will on both sides that will ensure we can conclude an ambitious free trade agreement by the end of next year.”

January 31 will mark 1318 days since the original vote to leave.

Mr Johnson was a prominent member of the Vote Leave campaign in the run up to the referendum.

With David Cameron resigning, Theresa May appointed him Foreign Secretary until his resignation in 2018.