Nicolas Cage is about to play himself in a painfully meta – but mostly fictional – comedy movie about his illustrious craft, and this undertaking will apparently include a look back at his roles in John Woo’s 90s actioner Face/Off, among others.

The actor told Empire magazine that The Unbearable Weight Of Massive Talent, which is set to begin filming imminently, will see him “taking the piss” out of himself after a long cinematic career filled with spectacular highs and baffling lows where sometimes, due to his electric on-screen presence, those can still be interchangeable.

The film’s writer and director, Tom Gormican, has just one feature directorial credit to date – 2014 rom-com That Awkward Moment with Zac Efron – but Cage seems to trust that he’ll be in good hands when playing both his present self and a younger, way more egotistical version from back in the day.

Cage also references his notorious interview with the late and great Terry Wogan as inspiration for the new film.

“Remember that talk show I went on, Wogan, when I was promoting Wild At Heart? Young Nic Cage [in the film] will be that guy. But this is a very stylised version of me. It’s definitely just me ‘taking the piss’, as they say, out of myself.”

A plot synopsis for The Unbearable Weight Of Massive Talent ‘imagines’ a heavily in debt Cage who is super keen to land a role in an upcoming Quentin Tarantino project while simultaneously trying to parent his weary teenage daughter. Cage will regularly converse with a younger incarnation of himself who is in the midst of his erstwhile 90s success and loathes who he’s become. It won’t be too hard-hitting, mind, as the story also pits him against a drug kingpin and plonks him in a real-life situation where he must live up to the big screen hero he used to play with bemusing regularity.

“It’s a stylised version of me, and the fact I even have to refer to myself in the third person makes me extremely uncomfortable. There are many scenes in the movie where modern or contemporary – here we go – ‘Nic Cage’ and then young ‘Nic Cage’ are colliding and arguing and battling it out. It’s an acrobatic approach to acting.”

Cage says he will be doing something he really hates for this one: examining his chaotic performances of yore.

READ  ‘Bad Boys for Life’ Directors on Getting THAT Cameo

“I don’t like to look back. But this movie kind of pushes it all back in my face,” he said. “I’m probably going to have to look at a couple of the movies from the past again because I think we’re gonna have to reenact some of those sequences. It’s like walking through a Cabinet Of Dr. Caligari version of Con Air and Face/Off.”

Scrubs and Reaper writer Kevin Etten penned the The Unbearable Weight Of Massive Talent, and Lionsgate has now set a March 19, 2021 release date for it.

DVD releases: What new movies are coming out on DVD and to stream in April?

The Other Lamb review – artful cult drama simmers with unease

RAD Is Finally Coming Out on Blu-ray, 4K Ultra HD This Year Thanks to Vinegar Syndrome 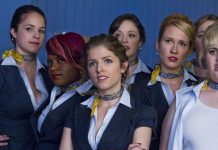 James Bond 2020: When is No Time To Die’s new UK release date after coronavirus pandemic forced its delay?

‘The Magicians’ Showrunners on That Series Finale, Happy Endings, and If This Is Really the End