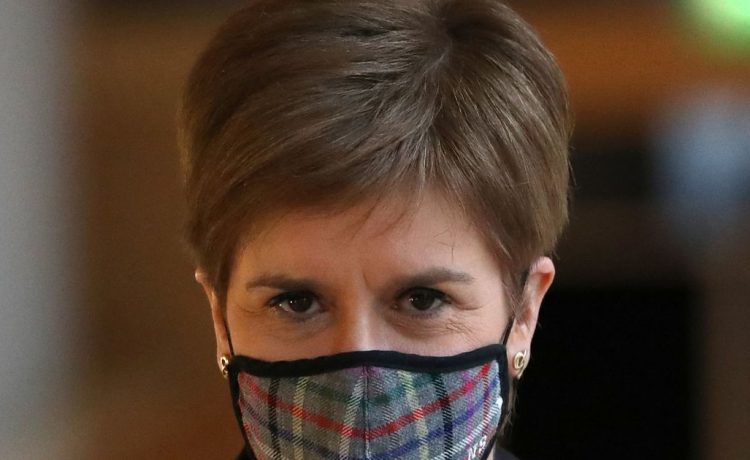 Nicola Sturgeon said she has decided to introduce “a slight slowing down of the easing of restrictions” to allow more people to be fully vaccinated.

The First Minister said the country was a “delicate and fragile point” and warnings from scientists should not be ignored as she gave an update on Scotland’s lockdown rules.

Addressing MSPs, she said: “In areas where cases are relatively high or rising, our judgement is that a slight slowing of the easing of restrictions to allow time for more people to be fully vaccinated will help protect that progress overall.”

It comes as scientists lined up to warn Boris Johnson to delay the final stage of England’s roadmap due to concerns about the Delta strain – formerly known as the Indian variant.

The move will prompt speculation that the Prime Minister will follow suit by pushing back the June 21 lockdown easements.

In the past, England has frequently followed Scotland’s lead on adopting more stringent rules, such as bans on mass gatherings, school closures and face masks in shops last year.

Under the Scottish Government’s roadmap, areas in Level 2 had been due to move to level one from June 7.

But the vast majority of Scotland’s central belt will now remain in Level 2 restrictions, she told MSPs.

But in a glimmer of hope, Glasgow will move down from Level 3 to Level 2 of the five-tier system on Saturday, allowing people to meet inside in groups of up to six, and letting pubs and restaurants resume serving people indoors.

Glasgow has been under tough restrictions for months, and had been held back due to recent spikes.

Shetland, Orkney and the Western Isles council areas would move to Level 0 – the lowest level of restrictions.

Ms Sturgeon said Scotland’s R rate was above one but rising case numbers did not “take us backwards” because of the vaccine rollout.

She said: “We believe that vaccinations are opening the path to a less restrictive way of dealing with Covid – one less driven by case numbers.

“But because not all adults have been fully vaccinated with two doses so far, we are not quite there yet.

“And as we make this transition – just to compound the challenge – we are also dealing with a new, faster spreading variant.

“This is, of course, a new development that has arisen since we set out our indicative route map back in March.

“All of this means that at this critical stage – to avoid being knocked off course completely – we must still err on the side of caution.”

Ms Sturgeon said vaccines were “changing the game” and there was still room for optimism about returning to normality over the summer.

She said: “In the days ahead – and while it may still feel a way off for many of us – we will publish more detailed work on what we expect life beyond Level 0 to look like, as that greater normality returns.

“Indeed, one reason for proceeding with more caution now, is to make it easier in the future to resume our progress to Level 0 – and then beyond.”