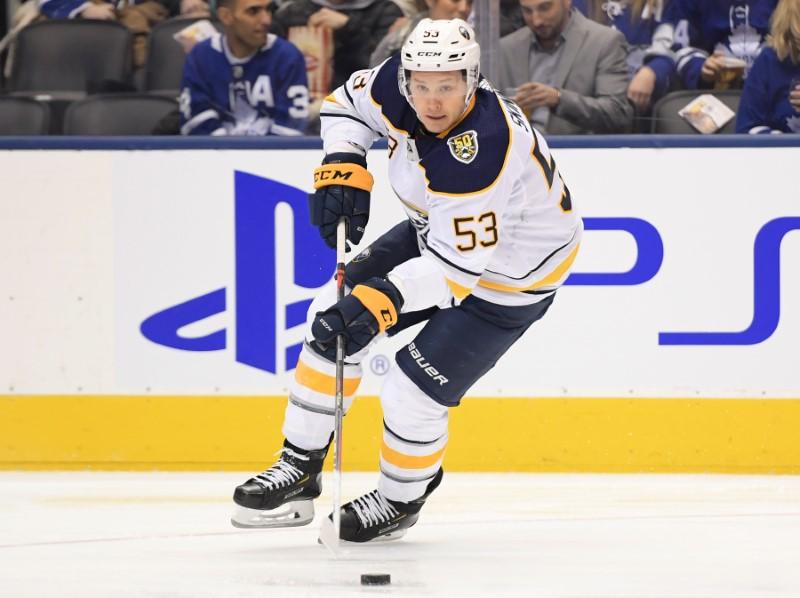 Buffalo Sabres forward Jeff Skinner will be sidelined for three to four weeks with an upper-body injury, the team announced Saturday.

Skinner appeared to injure his right shoulder when he was involved in a collision with Boston’s David Pastrnak in the third period of Friday’s 3-0 loss to the Bruins. After getting up, Skinner left the ice and headed for the locker room. The injury occurred during the 27-year-old’s 700th career game.

The two-time All-Star has 11 goals and eight assists (19 points) in 39 games. He scored a career-high 40 goals last season when he matched his career best of 63 points in his first season with the Sabres after being acquired in a trade with the Carolina Hurricanes.

—Toronto Maple Leafs rookie Ilya Mikheyev will miss at least three months following surgery to repair an artery and tendons in his wrist that were severed during Friday night’s 5-4 overtime win at New Jersey.

The 25-year-old forward is expected to make a full recovery. Mikheyev was accidentally sliced by Devils forward Jesper Bratt’s skate midway through the third period. He was trailing the play when Bratt lost his balance, causing his foot to fly up in the air and make contact with Mikheyev’s arm.

“It was obviously scary there, seeing that much blood,” Toronto captain John Tavares said, per ESPN. “Obviously, a guy that we care deeply about and was having a great night and playing tremendous for us, so thoughts are with him.”

—New York Rangers forward Brendan Lemieux is expected to be sidelined three to four weeks with a fractured hand, the team revealed.

Lemieux sustained the injury during New York’s 5-3 victory over the Carolina Hurricanes on Friday.

The 23-year-old, who is the son of former NHL forward Claude Lemieux, was acquired from the Winnipeg Jets on Feb. 25 in a trade involving fellow forward Kevin Hayes. Lemieux has recorded five goals, eight assists and a league-high 87 minutes in 35 games this season for New York.

—The Pittsburgh Penguins activated forward Patric Hornqvist prior to the home game against his former team, the Nashville Predators.

Hornqvist, 32, has missed the past 10 games with a lower-body injury. He has not played since Nov. 30.

Hornqvist has six goals and five assists in 20 games this season. In a corresponding move, Pittsburgh re-assigned forward Thomas Di Pauli to the Wilkes-Barre/Scranton Penguins of the American Hockey League.

Muzzin sustained the injury while blocking a shot in the first period of Toronto’s 5-4 overtime win against the New Jersey Devils on Friday in Newark, N.J. Despite being injured, Muzzin played the remainder of the game.

The Maple Leafs recalled fellow defenseman Timothy Liljegren from the Toronto Marlies of the American Hockey League on Saturday to replace Muzzin, who collected three goals and 10 assists in 38 games this season.